Words to Run By 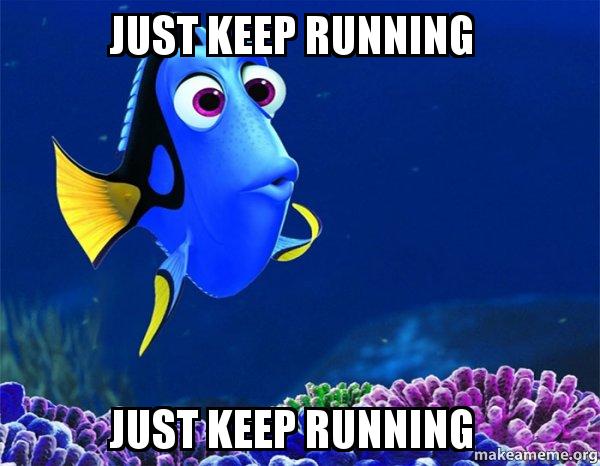 Even as the constant cheers from a million spectators fill their ears and urge their tired bodies up and over the hills, runners in today’s marathon will be attending to other voices — the quiet but urgent voices inside their own heads that repeat the words that help focus their increasingly distracted brains on maintaining forward momentum, on finishing the damn race.

Runners’ mantras are as varied as the runners who employ them. Some are simple positive self-talk (“You can do it!”), while others seem to come from an internal drill sergeant, tough and unsympathetic (“Suck it up, buttercup!”).

Some things we say to ourselves are those universal slogans available to all. Other things we say are unique and intensely personal, perhaps the name of a friend or loved one. Motivation comes from many sources, and our mantras reflect this.

The words in a runner’s head might be uncomplicated to the point that their constant repetition simply leaves no room for more complicated thoughts and doubts (“Just keep running“), or the words might incorporate minute and subtle instructions to focus on and maintain some aspect of one’s form (Run tall. Shoulders relaxed. Stay compact…”).

As a coach, I often wonder whether the things I repeat to my athletes find their way inside their skulls – whether my voice has taken residence inside their heads. If so, that’s a scary responsibility. I wonder, have I left them with words of confidence and encouragement? Or did some random remark I made without thinking lodge in their brains, ready to emerge in some future moment of crisis? Did I give them anything at all to use in times of need?

A couple of years ago, I did an exercise with the kids on the cross country team where I asked them to form an image of themselves running really, really well, and then to name that image with a word or two. These “power words” were to be stored away in memory, to be taken out when the going got tough. Did it make a difference? I honestly don’t know. How would anyone know? But I’m certain it didn’t hurt.

As for me, I almost always run with words in my head, not only in challenging situations like races and workouts, but on easy days, too. (Easy days are not always easy, as we all know.) The words in my head are usually instructions from my internal coach to pay attention to some aspect of the task in front of me. As such, my self-talk tends to be neutral, neither cheerleading nor self-flagellation, But at times, for reasons I don’t fully understand, my voices become more emotional and tell me I’m doing a great job, or, at the other extreme, mock me for wishing that running was easier than it actually is.

When I was thinking about this phenomenon, I recalled a passage from Once a Runner, specifically a scene that takes place early in the book as Quenton Cassidy tries to hang on to the runner in front of him during a six-mile cross country race:

“’This isn’t so bad,’ Cassidy thought. ‘I’m just dying is all. But hang on asshole and maybe you can be a hero at the end.’ The self-loathing was genuine and when he thought about it later it always mystified him.”

It is mystifying why sometimes allowing voices of self-loathing actually helps us face the difficulties we have in front of us. Is it because what we loathe are the parts of us that want to chicken out and avoid the inevitable confrontation with our limits? But this is dangerous stuff, I think, for if the voices only ever scold, eventually it will be the voices themselves that we seek to avoid.

Later in Once a Runner, Cassidy finally finds himself running the race for which he has been preparing through his Miles of Trials, and at the end, as it gets really bad, his brain has room for only a few choice words…

There’s no more room for the roar of the crowd; there’s only room for that one voice, single-minded, insistent.

It seems that, whether self-praising or self-loathing, heartfelt and emotional or dry and technical, born of our own dreams or originating in the words of coaches or parents, the voices in our head carry us along and are stilled only when the finish line comes into sight, and sometimes not until it has been crossed.

Running and Racing have been important parts of my life for as long as I can remember. I ran Track and Cross Country at Amherst HS, back in the day, and am proud to have been training and competing with the Cambridge Sports Union (CSU) for more than thirty years. If my bones hold out, I hope to continue for another thirty. Sixteen years ago, I began coaching, first as an Asst. Coach at Newton North HS in Newton, MA, and for the past ten years, as Head Track and Cross Country Coach at Concord Academy in Concord, Massachusetts. I've been writing about running for almost as long as I've been running, dating back to high school, when I would write meet summaries for the Amherst Record for about $0.33 per column inch. I've been blogging about running since 2005, and began blogging at "the runner eclectic" in 2014. Until recently I also had a day job, working full-time as a Technical Product Manager for Nuance Communications, based in Burlington, MA. But I am now on what might turn out to be a permanent sabbatical. Thank you for reading my blog, and please consider leaving a comment.
View all posts by Jon Waldron →
This entry was posted in Uncategorized and tagged mantra, running mantra. Bookmark the permalink.

2 Responses to Words to Run By