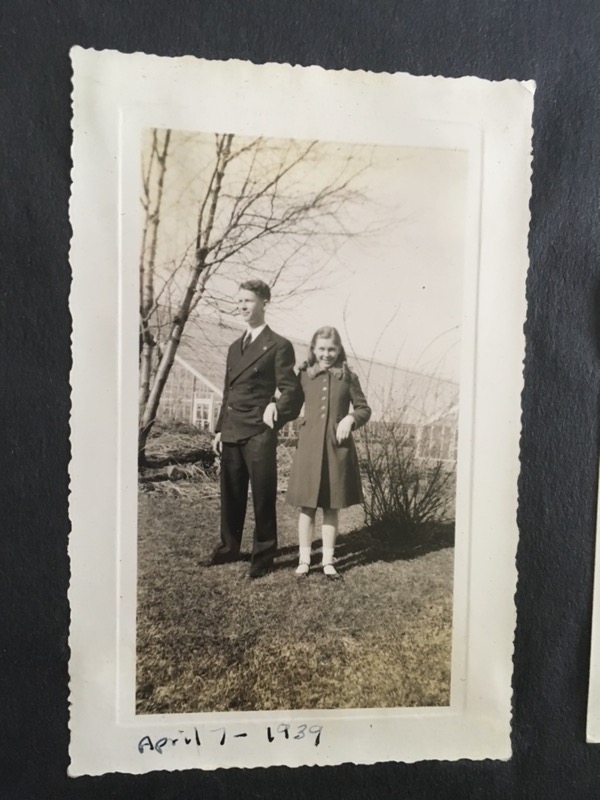 I heard the story from my mom so many times over the years that it seems now that there was never a time when I didn’t know it by heart. Details might have been added or elided, but the basic events were these: her father saw her running to or from school one day – or maybe it was every day – and scolded her for it. Running, he believed, was not ladylike; and girls should not be seen running to school. My mom rebelled, although that part was always a little unclear. I pictured her walking until she had turned the corner and was out of his sight, and then doing as she pleased. I imagine this drama repeated many times throughout her childhood.

In the last several years, as my mom’s short-term memory got worse, conversations with her would always reach back to the old days and to her childhood in New Jersey. She would ask me whether I was still running, and when I said that I was, she would again tell me the story about her father and his strict ways. By then, the story had been stripped to the bare essence; perhaps my mom realized that the specifics were no longer important. What she wanted me to understand was that her father had seen her running and told her, “Don’t run; walk!”

Wanting to bring the story to life, I would add my own invented flourishes: It was a spring morning and the forsythia were beginning to flower; it was her twelfth birthday and she was posing with her big brother, Ralph; there were irresistible signs of spring in the air. Feeling more than alive, she set off for school at a skip, a frolic, a run, but then her father called after her with the words that would echo down the years. I would see it all in my mind’s eye, see her walking out of his sight, turning a corner, and then breaking into a canter, thrilling to the breeze riffling through her hair and the delight of youthful disobedience.

I always kept this romantic version of the story to myself. To my mom, I would merely nudge her memory with, “You ran, anyway, didn’t you?” Thus prompted, she would always respond with a mischievous smile that welcomed me into the conspiracy, letting me know that she understood how a runner is always a bit of a rule-breaker.

This one memory – recalled so often that it became a kind of secret handshake between us – was a small thing in her rich and generous life. There are so many others that come to mind if my purpose were to tell the world what a wonderful human being she was, and what it feels like now that I know I won’t hear her tell those stories again. But the tale of the strict father and the irrepressible daughter is the one that I choose to explain what an extraordinary gift my mom gave me: the gift of understanding the heart’s desire to run.

It has entered Waldron family lore that one day when I was nine years old, my mom came outside to find me running laps around our house — lap after lap, more or less steadily with no break to rest. She would not have known, of course, that she was witnessing a preview of things to come much later. Nor would she have known what made me do it. But if she found my behavior troubling, she never showed it. Rather than call a psychologist, she let me finish, and then she listened thoughtfully and without judgement when I told her proudly that I had used a yardstick to measure the distance around our house – about 100 yards – and had just run 16 laps – because I wanted to run a full mile.

Unlike my Dad, who tolerated rather than endorsed my preference for running over more productive activities like mowing the lawn or painting the back steps, my mom sensed that I ran to satisfy a creative need, rather a utilitarian one. There was another story she told, about how when I was in junior high school, she came to pick me up at the Town Pool, but found me running repeat fast laps of the high school track across the street. It was then, she said, that she realized “You were really serious about this!”

Serious or not, as I got older and became more ambitious, my mom continued to offer unconditional support for my growing passion, even as she remained perfectly indifferent to times and records. If I were to come home after a high school track meet and tell her I had run a four-minute mile or a five-minute mile or an eight-minute mile, her reaction would be exactly the same: apparent delight that I had actually managed to run a mile. If I wanted more praise than that, or needed more sympathy, I would have to tell her WHY I thought it had gone well or poorly, and even then, it was nearly impossible to change her mind that what I had done was nothing short of wonderful.

To my teenage self, my mom’s inability or unwillingness to judge my running accomplishments struck me as baffling, endearing, and comical. I teased her about it, tried to trick her by telling her I had run some absurd time, but none of this had the slightest effect on how she beamed hearing about every race. It was the same with training. She was identically impressed with me whether I went for a twenty-minute run or a two-hour run. It was as though she had decided to take the exact opposite approach of her own father, who had been obsessed with the outward appearance of running and so had missed the essential joy that it expressed. It took me a long time to recognize that my mom was slowly and surely teaching me that it was not the run, but the runner that mattered, and that she was helping me build a base of self-belief that would survive any setback.

This, I eventually realized, was what she did for everyone.

My mom had a seemingly unlimited ability to encourage other people in the pursuit of their dreams. It takes only a little reflection to see that in addition to encouraging my running, she encouraged and cheered for all five of her kids as they explored remarkably varied talents and interests. She always expressed amazement at the five of us, as though she had nothing to do with our success, as though she had only been on the sidelines watching and cheering.

I remember a high school cross country meet at which the cold rain began before the start and continued through the afternoon. It wasn’t an important meet, only some regular season dual meet against an over-matched opponent. My mom came to that meet, as she came to all of our home meets, standing for half an hour in the pouring rain to watch me and my friends run. There weren’t many parents that day, but one of the others wondered aloud why on earth they were standing there getting chilled to the bone. My mom told me later how the question had surprised her, and how she had tried to answer by supposing that it was because if running was important to me, then it was important to her.

The last time my mom saw me run was about five years ago at the Amherst 10M Road Race, a USATF-NE Championship race held in the middle of February on a hilly course where I used to do long runs with my high school teammates. At that point, she was already having a lot of trouble walking, but she got a ride with a friend, and they staked out a viewing spot about a quarter mile from the finish. There, they waited patiently in the chilly morning air for the runners to return. Had it been twenty years earlier, I might have been up among the top runners and I wouldn’t have kept her waiting so long in the cold. But I was an old man myself, now, and I was nowhere near the leaders. The first runners came in, then a few more, and then more, and then waves of slower runners plodding to the finish with anonymous relief. When I finally came by, about 15 minutes later, I spotted my mom before she caught sight of me. She was leaning against her car, sweeping her gaze back and forth for any sign of her son. I yelled to her, and just managed to get her attention at the last possible moment before I was past and swallowed up into the general melee of the final quarter mile. As I finished, it struck me that although I knew I would not be satisfied at how slow I had become, I also knew that when we were all home again, my mom — who had waited for an hour to see me for a fraction of a second — would be unconditionally proud of me.

Runs aren’t easy for me anymore. It’s not just that in these days of pandemic it takes more planning to map out a safe route away from other pedestrians; it’s also that everything in my body creaks and complains. It takes me forever to warm up, and by the time I AM finally feeling warmed up, I’m already beginning to tire. Some days, the run goes well, I get in a few decent miles, and I begin to feel hopeful. Other days, the run goes poorly, and I wonder for the hundredth time why I even bother. But no matter what kind of day it is, after every run I think about my mom, about how someone once told her, “don’t run!” and how she defied that voice and ran anyway. I often wonder how much more running she might have enjoyed if she had been born thirty years later, and if she had received any real encouragement.

My mom, more than anyone else, gave me that irreplaceable gift of encouragement.
If I am still running now — or in ten years, or in twenty — it’s because I received that gift from her and am determined not to waste it. As long as I can, I plan to honor that gift and her by running for both of us. 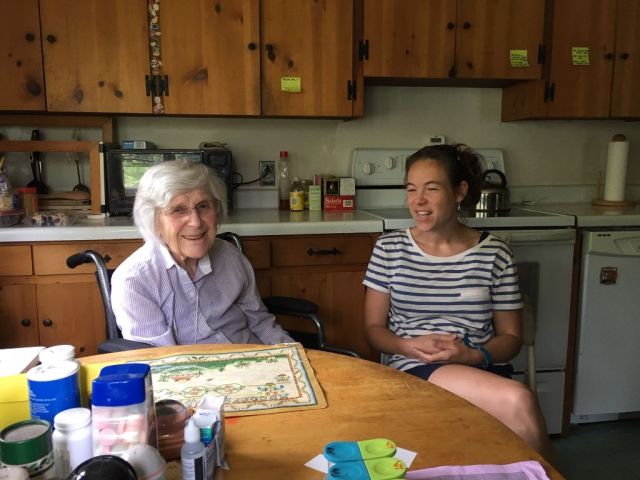 Running and Racing have been important parts of my life for as long as I can remember. I ran Track and Cross Country at Amherst HS, back in the day, and am proud to have been training and competing with the Cambridge Sports Union (CSU) for more than thirty years. If my bones hold out, I hope to continue for another thirty. Sixteen years ago, I began coaching, first as an Asst. Coach at Newton North HS in Newton, MA, and for the past ten years, as Head Track and Cross Country Coach at Concord Academy in Concord, Massachusetts. I've been writing about running for almost as long as I've been running, dating back to high school, when I would write meet summaries for the Amherst Record for about $0.33 per column inch. I've been blogging about running since 2005, and began blogging at "the runner eclectic" in 2014. Until recently I also had a day job, working full-time as a Technical Product Manager for Nuance Communications, based in Burlington, MA. But I am now on what might turn out to be a permanent sabbatical. Thank you for reading my blog, and please consider leaving a comment.
View all posts by Jon Waldron →
This entry was posted in In Memoriam, My Back Pages, Uncategorized and tagged Martha Waldron. Bookmark the permalink.

4 Responses to The Gift