Another few words about Boston 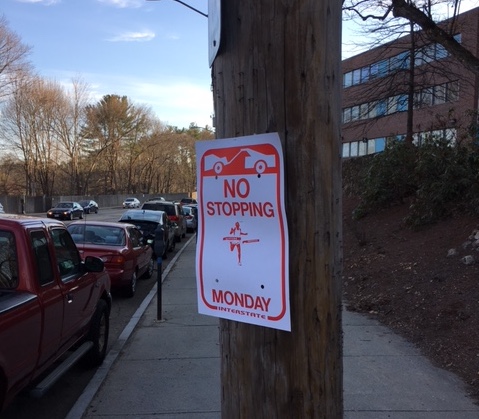 I hadn’t intended to write anything about the Boston Marathon this year. I found it hard to escape the feeling that everything had already been written, and by people much more dedicated and knowledgable than me. Since I had nothing to add, I’d simply take it in, as I usually do, from a spot along the course. If something interesting or unusual happened, well, sure, then I might react to it in a post, but I wasn’t planning anything.

Why not preview the elite race? I would have been coasting on LetsRun research)

Why not reminiscence about my own ups and downs at Boston? I’ve done that already, traumatizing more than one person looking for positive lessons.

Why not describe the literal ups and downs of the roads from Hopkinton to Boston? I’ve written about tangents, potholes, snow along the route.

Maybe if I was running marathons myself these days, I’d find more inspiration or a new angle. But I’m afraid my marathon days are behind me. Now I’m probably more similar to the average Boston spectator than to the runners, because my overwhelming thought about the event is that it’s an awful long way to run. Those people must be nuts!

What changed my mind, oddly enough, was reading Amby Burfoot’s thoughts about the upcoming Boston Marathon documentary, and specifically, seeing a picture that he included of the cards that he hands out to spectators when he runs the race. Here’s a picture of the front and back of the cards: 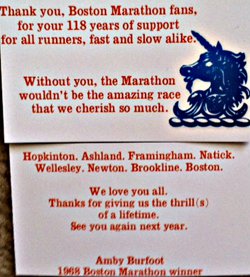 I saw this, and it struck me what an odd, quirky, familiar, and intimate experience it is to run in this race, and also to watch it.

Over the span of thirty-five years that I’ve lived in the suburbs of Boston, I’ve had a lot of experience with Boston. I’ve been a curious and innocent spectator, a bold participant with delusions of elite status, a knowledgable journalist, an (informal) tour guide for friends, an older and perhaps more humble entrant seeking redemption, a teammate handing out bottles and encouragement, a coach, a proud parent, a jaded fan… I’ve been totally into every moment of it, and I’ve been decidedly out of it… “Oh, is something happening in Boston on Monday? Maybe I’ll watch a little bit on TV.” The marathon doesn’t care. The marathon goes on with its unique arrangements and odd traditions, whether I choose to engage or not.

And it is an exceedingly odd event, when you think about it.

What other marathon happens on a Monday? What other road race causes a major league baseball game to start at 11:00 a.m., and no one in the city thinks that’s strange? In what other event would a former winner, 49 years removed from his day of glory, run the race and hand out those funny, homemade, beautiful cards, and in what other event would there be a good chance that most of the 1.5 million potential recipients of the card would recognize the name of that ancient runner?

Boston is unique because it clearly has become (or always was) something much more than a footrace, and yet, it has never quite lost its soul as an uncommonly interesting competition. All the spectacle — the costumes, bandits, stunts, screaming women (and men) at Wellesley, drunken men (and women) at BC — have not managed to drown out the simple proposition that anyone who runs from Hopkinton to Boston on Patriot’s Day is, for that one glorious day, the pride of the office, the school, the family.

Every year I ask the kids on my team if they know anyone running the marathon. They always have an aunt, and uncle, or a friend of the family running, and a surprisingly large number of them will be out there on the course somewhere, waiting with a hand-made sign for that moment when their runner comes by.

Boston Marathon Day reminds me of Thanksgiving. Every family has its traditions; some years, everyone shows up to be part of well-worn rituals, while other years, life’s little challenges make it impossible for the whole clan to congregate as they once did.

And every year, parents take their kids out to watch and to learn. Important lore is passed along; important truths are imparted: The runner with the high number out in front of the pack early is not to be taken seriously. The elite men and women with foreign names and foreign passports are to be respected for their excellence, but an American named Meb Keflezhghi could beat them all in 2014 with courage and wisdom and faith. The race is long and is not always to the swift. There is Heartbreak — alas! — but there is also something beyond Heartbreak, if you can just keep going. It’s always a good idea to have water and orange slices to hand out to those who might need a little help on their journey.

The marathon is a pain. It snarls traffic on a workday. It produces tons of litter and costs a fortune. It’s also one of the best spectator events in the world, free to anyone who cares to pull a lawn chair up to the side of the road in Wellesley or Newton, or stand with the mobs in Brookline and Boston.

No, I have nothing new to say about Boston. Watch it or ignore it, it will go on its merry and peculiar way, so deeply a part of all of us here that, like prodigal sons and daughters, we can stay away for years pretending not to care, and come back to find it’s ready to take us back — no questions asked — with its big heart and open arms.

Running and Racing have been important parts of my life for as long as I can remember. I ran Track and Cross Country at Amherst HS, back in the day, and am proud to have been training and competing with the Cambridge Sports Union (CSU) for more than thirty years. If my bones hold out, I hope to continue for another thirty. Sixteen years ago, I began coaching, first as an Asst. Coach at Newton North HS in Newton, MA, and for the past ten years, as Head Track and Cross Country Coach at Concord Academy in Concord, Massachusetts. I've been writing about running for almost as long as I've been running, dating back to high school, when I would write meet summaries for the Amherst Record for about $0.33 per column inch. I've been blogging about running since 2005, and began blogging at "the runner eclectic" in 2014. Until recently I also had a day job, working full-time as a Technical Product Manager for Nuance Communications, based in Burlington, MA. But I am now on what might turn out to be a permanent sabbatical. Thank you for reading my blog, and please consider leaving a comment.
View all posts by Jon Waldron →
This entry was posted in Marathon and tagged Amby Burfoot, Boston Marathon. Bookmark the permalink.

1 Response to Another few words about Boston