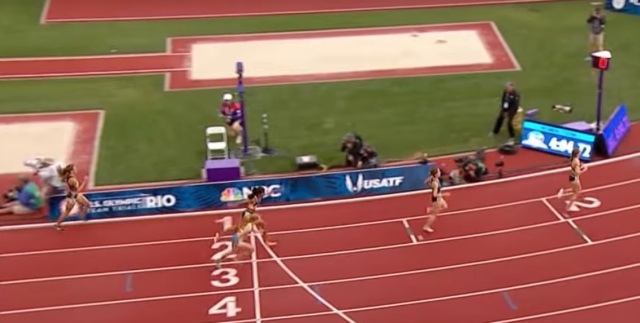 Brenda Martinez edges out Amanda Eccleston for 3rd in the women’s 1500m final.

“I was thinking, no matter what I have to get to the finish line […] Over the last two hurdles I thought, I’m getting over this and I’m going to make this team, even if I have to die for it.” – Byron Robinson

“I just kept telling myself not to give up.” – Brenda Martinez

This morning, before I typed a single word of this post, I spent at least a half an hour reading the news and the message board comments to hear what other people had to say about the Olympic Trials. I’m not sure why I did this. Maybe I was looking for some single idea upon which to build my own response, an angle for a clever post of my own, a theme that would help me condense my thoughts and personal reaction to the riveting events of the night before into some coherent point of view. Maybe I was hoping that reading the words of others would help me process the experience of watching those final ninety minutes of competition.

In that hour and half, in race after race, I watched fields full of deserving athletes — including talented teenagers in their first Trials, former Olympians trying to stay on top, and journeyman professionals who had put the rest of their lives on hold for years to have just this one, perhaps best chance to achieve that lifetime goal of making an Olympic team — separated suddenly into the wheat and the chaff, into the chosen three whose names would appear on the scoreboard followed by five Olympic rings, and the also-rans who would face four years, or a lifetime, of knowing they had been THAT CLOSE and had fallen short.

It gets personal, this business of following track and field. I think that even the most detached fan of the sport identifies with one or more athletes, with their backstories and struggles, and suffers a little bit at every setback. Sitting in our living rooms, or even in the safe stadium seats above the action, we track fans make our predictions and place our bets, but in the end find our own hearts pounding for the men and women, the boys and girls, who have made their way into the arena looking like prisoners being taken to their own executions.

We adopt athletes as our heroes and our villains. We see this one as an embodiment of the perseverance we wish we had in our own lives. We see that one as a cheat, or a bully, or an arrogant S.O.B. who has had all the advantages. We fans project our own hopes, fears, insecurities, and resentments onto the contests that unfold in front of us. Maybe we root for redemption, the way we root for Brenda Martinez to somehow make up for that catastrophic fall in the 800m finals by making the team in the 1500. Or maybe we root for the comfort of the established order, the way we root for Allyson Felix to get one more shot in the 200m. Maybe we cheer the athletes who strike us as being the nicest people, because we desperately want to believe that nice guys don’t finish fourth; or maybe we cold-bloodedly cheer the athlete who we don’t think is particularly nice, but has the best chance to bring us back those precious Olympic medals.

We might scoff when athletes thank God for their victories (as though God had nothing better to do than go through the start list picking his favorites to be rewarded with one of the top three spots), but I think we play the same game ourselves, with our own ideas about who deserves it more. I know I did this, and I’m not ashamed to admit that I was really happy to see Brenda Martinez fall headfirst across the line to edge out Amanda Eccleston for the final qualifying spot in the women’s 1500m. But that heartwarming story doesn’t exist without Eccleston’s heartbreaking near-miss, or the even more heart-breaking finish of Morgan Uceny, who has survived and persevered after not one unlucky fall, but two gut-wrenching stumbles in the Olympics and World Championships.

It was easy to adopt Martinez as a role model because of how she rejected the path of self-pity after the 800m debacle. Probably a lot of us wish we could be like that in our own lives, and respond to life’s disappointments without feeling sorry for ourselves. So perhaps we invest a little bit more in Martinez. But I’m a little skeptical of my own perspective, because I don’t really know any of these athletes, only what I have seen in a very few public moments and a very few news stories. I’m a sucker for the narrative, just like everyone else.

And even when I don’t know anything about any of the competitors, I make up my own stories. I loved watching the final event of the women’s heptathlon, for example, because I was absolutely smitten by the performance of Kendall Williams, who, after two days of competition, ran a two-second PR in the 800 to hang on to 3rd place and get an Olympic spot. In that final event, she made a simple but bold calculation: she would try to run faster than she ever had in her life or die trying, and in an 800, dying is not pretty. Instead of dying, she lived. (By the way, I found it really interesting to hear decathlete Trey Hardee describe how a multi-event athlete looks at such a challenge. He was adamant that the only way is to commit yourself fully to staying with runners faster than you. It’s the Olympic Trials. It’s the only way you’ll ever find out what you’re capable of.)

I felt awfully bad for favorite Johnny Dutch, who nicked the final barrier in the 400 hurdles, slowing him just enough that he was caught and passed and ended up fifth. It was agonizing to see the shock and remorse on his face, but then there was Byron Robinson, the man who finished second, overwhelmed by the sudden realization that he had made the team. I hadn’t known a thing about Robinson before the race, but I instinctively felt drawn to his surprise and joy at finding himself where he had always dreamed of being. 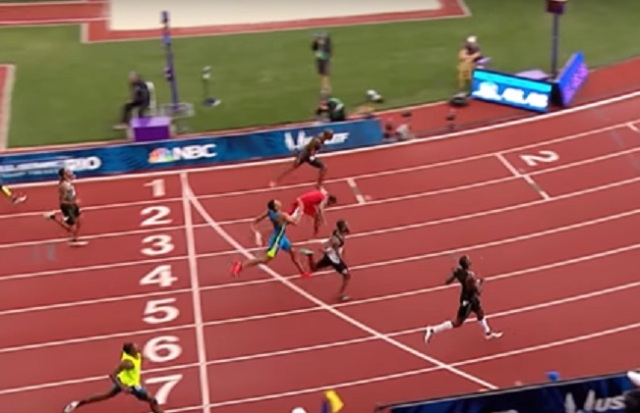 Bu I was struck as I read the message boards, at the shallow, detached tone of most of the posts. That’s to be expected, I suppose. It’s a forum that rewards the more outrageous and cynical opinions with attention. It didn’t matter to me. Even as I read post after post ridiculing this runner, accusing that one of doping, salaciously leering at the female runners, or dismissing them as not being attractive, I found myself  more and more certain about what I wanted to say about the Trials.

There is no other meet that I know of, Olympics and World Championships included, that brings us closer to the emotional reality of trying to succeed as a professional athlete. I guess some people can feign detachment or feel better about themselves by tearing down public figures — fair game, right? — including pro runners, but for me it’s impossible not to realize and be awed at the immense amount of dedication and overcoming personal hardship that goes into even making it to the starting line. And then for what? For a chance to make the team and train even harder for the next meet where you might bomb out in the first round, but in reality for the far greater chance that you’ll have your heart broken into a thousand pieces, and then hear the jeers from the ignorant army of Internet trolls bleating their mockery from the comfort of their anonymous keyboards.

Yeah, for those chances, for those odds. And that’s why the meet matters.

At the risk of sounding corny, I do believe that all of us have to decide over and over in life whether we’re going to care enough to keep pursuing our goals even though that means being vulnerable to criticism and disappointment, or whether we’re going to be cynical and immune. It’s a heck of a lot easier in the short run to be cynical, and I think most of us aren’t strong enough to handle the disappointment of not getting something that we really, really care about. So we lower our expectations and save ourselves the trouble; we run with the crowd and rationalize our lack of commitment with a thousand reasonable arguments. That’s OK. We can’t all be Olympians, or even Olympic wanna-be’s.

Yeah, that’s what we tell ourselves, but the thing is, like the athletes we just watched for ten days, we all make choices every day whether to keep going or give up. And every day that we don’t give up is a victory. It probably doesn’t feel like a victory, any more than fourth or fifth place at the Olympic Trials feels like a victory, but that’s what the trials means, and that’s why the competition matters.

Running and Racing have been important parts of my life for as long as I can remember. I ran Track and Cross Country at Amherst HS, back in the day, and am proud to have been training and competing with the Cambridge Sports Union (CSU) for more than thirty years. If my bones hold out, I hope to continue for another thirty. Sixteen years ago, I began coaching, first as an Asst. Coach at Newton North HS in Newton, MA, and for the past ten years, as Head Track and Cross Country Coach at Concord Academy in Concord, Massachusetts. I've been writing about running for almost as long as I've been running, dating back to high school, when I would write meet summaries for the Amherst Record for about $0.33 per column inch. I've been blogging about running since 2005, and began blogging at "the runner eclectic" in 2014. Until recently I also had a day job, working full-time as a Technical Product Manager for Nuance Communications, based in Burlington, MA. But I am now on what might turn out to be a permanent sabbatical. Thank you for reading my blog, and please consider leaving a comment.
View all posts by Jon Waldron →
This entry was posted in Olympics, Pro Runners and tagged Olympic Trials. Bookmark the permalink.