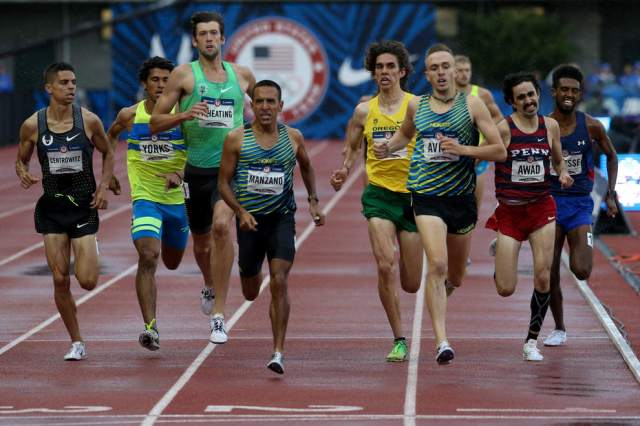 “Was he of this earth? Could it really be this much of a joke to him, running this pace without a care in the world?” – John L. Parker, Once a Runner

Another evening in Eugene, and another half dozen spills and thrills in the middle distance races. Throughout the all-but-superfluous 1500m heats, large tightly-bunched packs of superbly trained milers dawdled through lethargic early laps until it was time to sprint like madmen for one of the auto-qualifying places and the right to advance to the semi-finals. It was like rush hour on Route 128, with the uneven tempo and constant jockeying for position leading to fender benders, or worse.

This is the world of the early rounds, where the main goal is to avoid elimination while expending the least amount of effort. It might seem like a mere formality for the favorites, but the prospect of failure and an ignominious early exit in the heats is always there. Success — that is, qualification into the next round — hardly seems like a cause for celebration, and indeed, the top finishers seem almost grim as they quickly depart the scene.

But for a very small group of runners, running rounds seems not to cause any particular anxiety or stress. It might be an illusion, but it’s as though these runners are operating on an entirely different level, floating confidently above the fray.

I had that thought watching Matt Centrowitz race last night. In the 3rd heat of the men’s 1500, Centrowitz ran in last most of the race, and then casually, and with no apparent strain, rolled out a last lap nearly a second faster than the leaders to move past most of the field and finish 4th. That last lap was remarkable for being unremarkable, and entirely free of panic at any point even as Centro swung wide around the final turn in 7th or 8th place. He simply took the measure of his competitors, and then ran incrementally faster than everyone else in the final 80 meters, floating serenely across the line as he glance to his left to make sure he stayed ahead of several other straining runners.

Robby Andrews, possessor of an almost supernatural kick, looked equally untroubled as he calmly ran a 52 last lap to move from near last to fourth in the 2nd heat. It must be a nice feeling to know that no matter what position you’re in with 400 to go, you’ve got the tools to make up a couple of seconds on the field any time you damn want to.

In the women’s races, the style of dominance was a bit different. The race strategy du jour seemed to be to go to the front and try hold on. Amanda Eccleston followed that strategy successfully in the first heat, and won her race with the fastest time of the night. But she never looked like it was a walk in the park. By contrast, Jenny Simpson won the third heat without ever seeming troubled by the thought that anyone would be foolish enough to challenge her.

In the last race of the night, Emma Coburn won the steeplechase final, and while I wouldn’t call it casual, it was striking how little doubt she or anyone else had that she would win. She stayed near the front of the race through the early laps, began to pull away with 800m to go, and was never challenged after that, even though a fierce battle for the final spots was taking place behind her.

I’ve long felt that the most impressive thing about really good athletes is not how fast they run, or how many times they win, but how easy they make it seem. It’s always exciting to see a race where everyone’s working really hard, thrashing themselves to reach the line a few hundredths of a second sooner, grimacing in pain, and all that. But it’s a different experience entirely to see someone dispatch a talented field of rivals with the haughtiness of extreme competence. Only a very few athletes ever achieve that level of awe-inspiring dominance on the world level. One thinks of Bolt, Bekele, Rudisha in 2012.., who else?

Maybe, as I said, it’s an illusion. Maybe it only seems like a lark, and the reality is that there’s a supreme effort taking place below the surface. But even if that’s true, the temporary appearance of invincibility still strikes awe and fear into the hearts of mortals, and prompts us to ask with Quenton Cassidy, are these champions of this earth?

Running and Racing have been important parts of my life for as long as I can remember. I ran Track and Cross Country at Amherst HS, back in the day, and am proud to have been training and competing with the Cambridge Sports Union (CSU) for more than thirty years. If my bones hold out, I hope to continue for another thirty. Sixteen years ago, I began coaching, first as an Asst. Coach at Newton North HS in Newton, MA, and for the past ten years, as Head Track and Cross Country Coach at Concord Academy in Concord, Massachusetts. I've been writing about running for almost as long as I've been running, dating back to high school, when I would write meet summaries for the Amherst Record for about $0.33 per column inch. I've been blogging about running since 2005, and began blogging at "the runner eclectic" in 2014. Until recently I also had a day job, working full-time as a Technical Product Manager for Nuance Communications, based in Burlington, MA. But I am now on what might turn out to be a permanent sabbatical. Thank you for reading my blog, and please consider leaving a comment.
View all posts by Jon Waldron →
This entry was posted in Pro Runners, Racing, Uncategorized and tagged Emma Coburn, Matt Centrowitz, Olympic Trials, Robby Andrews. Bookmark the permalink.