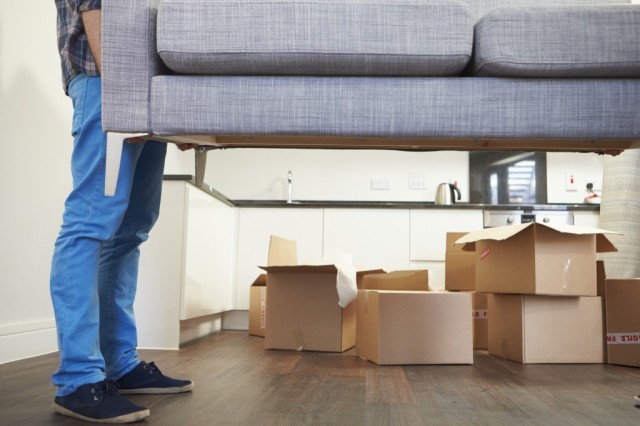 On Saturday I helped some friends move from their small apartment in Watertown, Mass. to a much more spacious apartment in Acton. Although the old apartment, located on the first floor of a two-story house near Watertown Square, appeared compact from the outside, it had the astonishing ability to bring forth multiple truckloads of stuff. In fact, even before Saturday, several sizable loads of boxes had been extracted, and after Saturday there would still be lots left to transport, but that hardly seemed possible given how much tonnage we moved on Saturday afternoon. The effect of bringing bulky items out of the house was a little bit like liberating an endless series of clowns from a Volkswagen, only in this case it was pieces of Ikea furniture, not clowns.

And yet, I would describe it as a joyful experience. There’s something gratifying about being part of someone’s relocation. It means being actively present at a pivotal point in their life, encouraging and supporting them as they step boldly into their future. It’s intimate and public at the same time, like a wedding, but without the flowers and fancy clothes. But most of all, it’s one of those moments when the private experience overlaps the collective effort, and that can be emotionally rich and satisfying. I suppose you could say it’s not called ‘moving’ for nothing.

And even though I am no spring chicken, as a reasonably fit guy I felt that I had a valuable role to play in the whole affair. It’s true that I don’t look much like a mover with my slight frame and skinny arms, but my legs are strong and I have the endurance to go up and down stairs all day, if needed. In fact, runners are extremely useful people to have on hand for transporting the medium-weight items in an apartment from residence to truck to new residence. We don’t need to catch our breath after every flight of stairs, and once in motion we tend to remain in motion, trotting tirelessly back and forth like Energizer Bunnies ferrying our bunny-weight loads to and fro.

But pleasant as it is to contemplate the good that one does by applying running fitness to the enterprise of helping out friends on the move, the activity itself is like kryptonite for runners. It deadens the legs, strains the back, and throws all of the finely-balanced running mechanics into disarray. In short, heavy-duty moving work and running do not mix well.

Ask any runner and they will tell you (with visible shuddering) stories of how some of their worst injuries followed days of maneuvering couches and refrigerators around corners, lifting and carrying boxes up and down multiple flights of stairs, and loading bulky objects into U-Hauls. I know in my own case, one of the most annoying injuries I ever sustained was the direct result of an especially long and active day of helping my niece move roughly two miles from one part of Somerville to another. My hip flexors were shot, at least they were after I ignored what had been only a vague discomfort and attempted to do a workout the next day.

You might wonder why a runner would overdo the moving thing, if it inflicts such damage. Ah, but that is the devil of the thing: being part of a crew of people moving stuff is similar in many ways to participating in a race, workout, or long run. Once you get started, there’s an obsessiveness to the effort, and a goal that you want to achieve. Not only that, there’s something about lifting and carrying that triggers (in me, anyway) a kind of competitive instinct, where I want to move stuff faster the everyone else. In a way, I guess, it’s a chance to show off your fitness. And as the hours pass and the sun sinks lower in the sky, there’s an urgency about finishing the task. Others suggest taking a break, but that would be like walking in the middle of a long run. Who does that? So you pick up the pace, lug a few more cartons, and try to convince yourself and others that you’ve got plenty of energy left.

This is stupid, no doubt, but I can’t help myself. I’m programmed to think about the task in a particular way, and so moving becomes a hard, hard workout — using muscles in ways for which I haven’t trained.

Keeping all this in mind, I was very happy to wake up Sunday morning and not feel crippled, and very careful to keep my afternoon run short and slow. So far, nothing seems to have been damaged too much, knock on wood. But I hope that it will be many months if not years before I have to take one end of a bureau — and with it, my running health — into my hands.

Running and Racing have been important parts of my life for as long as I can remember. I ran Track and Cross Country at Amherst HS, back in the day, and am proud to have been training and competing with the Cambridge Sports Union (CSU) for more than thirty years. If my bones hold out, I hope to continue for another thirty. Sixteen years ago, I began coaching, first as an Asst. Coach at Newton North HS in Newton, MA, and for the past ten years, as Head Track and Cross Country Coach at Concord Academy in Concord, Massachusetts. I've been writing about running for almost as long as I've been running, dating back to high school, when I would write meet summaries for the Amherst Record for about $0.33 per column inch. I've been blogging about running since 2005, and began blogging at "the runner eclectic" in 2014. Until recently I also had a day job, working full-time as a Technical Product Manager for Nuance Communications, based in Burlington, MA. But I am now on what might turn out to be a permanent sabbatical. Thank you for reading my blog, and please consider leaving a comment.
View all posts by Jon Waldron →
This entry was posted in Injuries & Health, Uncategorized and tagged moving. Bookmark the permalink.