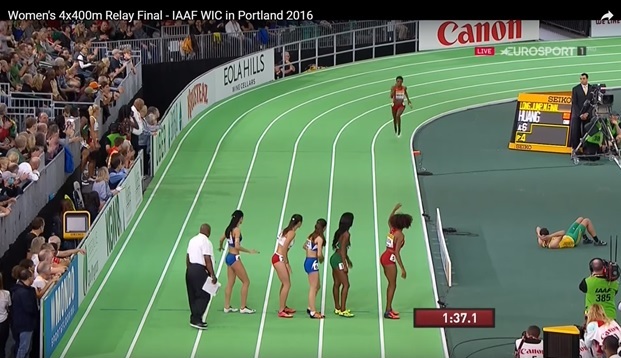 Whether you think “Team USA” is shorthand for overbearing and jingoistic national pride, or find yourself cheering on every American athlete with unquestioning patriotic fervor, the news from Oregon has likely intensified your feeling. That’s because no country has ever dominated an IAAF Championship Meet like the U.S. just dominated the Indoor World Championships, hosted over the last four days on the Emerald Oval at the Portland, Oregon, Convention Center.

The U.S. won an unheard of 13 gold medals, exactly half the number available in the 26 contested events, and added 6 silver and 4 bronze for good measure. The second most successful country was Ethiopia with two golds and five total medals. No other country had more than one gold. The U.S. sprinted better than sprinting powerhouse Jamaica, ran the middle distances as well as Ethiopia and better than Kenya, and won both relays by wide margins. The field events? The U.S. had medal winners in 7 of the 10 contested events, including 5 golds (men’s and women’s LJ, women’s PV, women’s SP, and women’s HJ). The multis? Ashton Eaton won gold, and Curtis Beach came within a couple of seconds of a bronze, in the heptathlon. Even when there were no medals to be had, the Americans always seemed to be near the podium. I counted four-fourth place finishes (Barbara Nwaba in the pentathlon, Robby Andrews in the 1500, Jared Eaton in the 60m hurdles, and Keturah Orji in the women’s TJ), and a couple of fifth-place finishes. The Americans were everywhere.

So what was going on in Oregon?

Whatever the reason, the U.S. was massively better than the rest of the world. It remains to be seen whether that will translate to success at the Olympic Games in Rio this summer.

I see that I just wrote “…Indoor track is big in the U.S.,” but I need to qualify this. Huge numbers of U.S. high school and collegiate athletes participate in indoor track every winter. But participation doesn’t equal awareness. I found myself grateful (grateful!) for the NBC coverage of Worlds, when I realized that at least they were covering it, unlike my hometown newspaper the Boston Globe, which was not.

Each morning after I had stayed up late following the action on the IAAF web site, I’d check the Globe to see whether they would report on the American victories. It became a bit of a game to note what the Globe WOULD find significant, while they steadfastly ignored the first IAAF World Championship meet to be held in the United States, and the dominant performance of the national team. I found extensive coverage of the major sports, of course, pages of info about college and high school basketball and hockey, and much fine print covering minor league sports, foreign soccer scores, obscure NFL transactions, and other minutiae. I read that a particular pitcher took a day off at Spring training, that some football player I’d never heard of was released by his team, that an assistant coach had been promoted from one lowly job to another. All vital stuff, no doubt, but still it seemed strange that in four days, not one word appeared in the Globe about the track meet taking place in Portland.

Well, I’m in no mood to complain. I was happily surprised at what a fun meet it was. I don’t care that I’m in the minority as a fan of the field events and the multis, and if the rest of the sporting public remains oblivious, well maybe that’s not such a bad thing. After all, one of the pleasures of following a meet is being open to interesting developments that emerge out of the chaos and obscurity — Curtis Beach desperately trying to use his freakish (for a decathlete) middle-distance ability to make up a hundred points in the final event of the heptathlon and move into the medals. I love watching stuff like that.

In the end, I guess I was a “homer,” delighted to see the Americans doing so well. At the very end of the meet, watching the 4 x 400 relays on TV, my non-track-loving son wandered into the living room, and I confidently predicted chaos, collisions, controversy, and an American win. Sure enough, in the women’s race, Jamaica’s first runner was wiped out in a collision and the U.S. went on to win by a straightaway. In the men’s race, more fun as Belgium’s third runner had the baton knocked out of his hand just after the second exchange. Meanwhile, the U.S. runner was 10 meters in front of the field, running free and unmolested at the front. As had been true all week, the Americans seemed to have it all their own way.

Running and Racing have been important parts of my life for as long as I can remember. I ran Track and Cross Country at Amherst HS, back in the day, and am proud to have been training and competing with the Cambridge Sports Union (CSU) for more than thirty years. If my bones hold out, I hope to continue for another thirty. Sixteen years ago, I began coaching, first as an Asst. Coach at Newton North HS in Newton, MA, and for the past ten years, as Head Track and Cross Country Coach at Concord Academy in Concord, Massachusetts. I've been writing about running for almost as long as I've been running, dating back to high school, when I would write meet summaries for the Amherst Record for about $0.33 per column inch. I've been blogging about running since 2005, and began blogging at "the runner eclectic" in 2014. Until recently I also had a day job, working full-time as a Technical Product Manager for Nuance Communications, based in Burlington, MA. But I am now on what might turn out to be a permanent sabbatical. Thank you for reading my blog, and please consider leaving a comment.
View all posts by Jon Waldron →
This entry was posted in Indoor Track, Pro Runners, World Championships and tagged IAAF World Championships, Team USA. Bookmark the permalink.