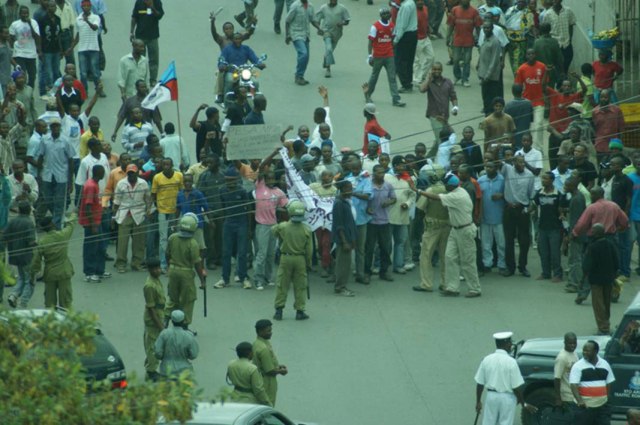 Our last full day in Arusha began uneventfully. There were no predawn wake-up calls, no sleeping bags to roll up, no tents to take down, and no maps to consult. For the first time in the new year we were not about to be packed into the Land Cruiser for ten hours of driving. Instead, we had plenty of time for breakfast at the hotel, and then all day for final errands in town before our departure the following afternoon. In addition to finding small gifts for people back home, our objectives for the day included finding a place in the city that might be able to print out some of the pictures we had taken over a week earlier at Oju’s family’s house, so that we could present the pictures as a thank-you gift for their hospitality. Ann’s brother Peter also was on a mission to purchase some Tanzanite (a mineral found in Northern Tanzania that is much prized for it’s vivid blue-violet colors). With this mixed agenda, we set off at around nine in the morning to walk into town.

As we arrived at the clocktower in downtown Arusha, we got our first indication that it would not be a normal day for us or for the city. As we waited to cross a street, we saw several large trucks come rumbling through the square. But these were not the typical diesel trucks that clogged the roads day and night. These trucks had open platforms behind the cab, with metal railings. In the back of each one there were perhaps 15-20 armed men wearing white uniforms and dark berets. Were they soldiers? Policemen? Either way, it was an intimidating sight. We thought maybe it was a parade for some national holiday, or perhaps a military training exercise. In a country we didn’t know well, it might even have been an everyday occurrence, but with no context, we weren’t sure. Of course we asked Joni, but she could offer no insight. So we simply noted it, and continued on our errands.

It was the kind of day when everything took longer than expected. Eventually, we did find a place that could print pictures, but it took a while to figure out how to transfer them from our cameras to their equipment. Peter did manage to locate a Tanzanite dealer and agree on a purchase. After a few hours that included stopping at a number of other places, we finally found ourselves at the large market/department store at the other side of town, perhaps a mile from the city center. This was the same store where we had purchased all of the water and other sundries for our expedition a week and a half earlier. Feeling a bit footsore and not looking forward to a long walk back into town, we decided to splurge on a taxi back into town, where we would have lunch at a place where Joni swore they served something resembling Western-style pizza.

As we drove back into downtown, traffic seemed especially heavy, and we were making very slow progress. Suddenly, we heard what sounded like a series of small explosions.

The next few moments were a blur. In preparing to write this, I asked Ann and Joni what they remembered, and we all recalled those moments slightly differently. What I remember is that the taxi had just made it through an intersection, when from a side street there came a wave of people sprinting towards the square. This wasn’t like a road race, where hundreds or thousands of runners move in the same direction in a well-organized column; this was fluid and chaotic, like a torrent rushing and overflowing the banks of a stream. The crowd quickly engulfed the square where we had been only moments before, and then flowed down the street in the direction from which we had come. Meanwhile, our driver took us in the opposite direction and within a couple of blocks, we found ourselves driving down a perfectly quiet road, as though nothing had happened.

We were surprised and shaken by this incident, but eventually, decided that there was nothing to do but carry on. The taxi dropped us off at the restaurant, we had our lunch, and then we split up to do a few more errands. I remember that Ann and I stopped at an open-air market selling the usual arts and crafts to tourists like us. This was another chance to practice my remedial language skills (if not my negotiation skills), and I ended up buying a few more gifts for folks back home, while managing not to buy anything from the guy who kept pestering me by calling out “Rafiki! Rafiki!” (“Rafiki,” the name of the wise mandrill in The Lion King, is the Swahili word for “friend.”)

About three in the afternoon, we finally set out for the walk back to “The Outpost,” but it was a strange walk. While we headed away from downtown, we passed group after group of young men walking in the opposite direction towards the city center. None of them paid us any mind, but there was something ominous about it all the same.

Back at the hotel, we began piecing together what had happened from talking with the manager at the front desk, and from trying to decipher reports being broadcast on a TV in the lobby. We didn’t have the full picture then, and we’d hear additional details from Rob the next morning, but this is approximately what had happened:

A couple of months earlier, there had been an election in Arusha, and a candidate from the party in power had apparently defeated the challenger from the opposition “Chadema” party. There had been allegations from Chadema leaders that there had been irregularities in the vote. The issue had simmered for a while, and apparently Chadema supporters had planned a big rally at the soccer field in Arusha for that day, January 5th. The day before, the government had cancelled the permit for the rally, but a number of people showed up anyway. The government had sent in police to disperse the crowd. The police had used tear gas (the explosions we had heard), which had sent the crowd running.

Later in the afternoon and evening, after we had returned to the hotel, there was more civil unrest in the city. We would find out the next day that rioters had damaged police trucks and buildings. At some point, two of the protesters were shot and killed.

We knew very little of this while it was happening. I still remember how strange it was to know that something momentous was taking place, but to have no idea what it was or why it mattered, or who was involved. Having been immersed in Tanzanian culture for the last two weeks, it was a frightening reminder that we were, after all, strangers here. Perhaps Joni, who had lived in Tanzania for two separate six-month periods and who could understand at least some of the excited news reports being broadcast on the local TV station, felt differently.

I think the best way to seek understanding of a foreign place is to explore it through the things about which you’re passionate. I think that’s why my run with Oju and my study/practice of Swahili were so important to me. For Ann, the final morning that we were in Arusha gave her a chance to satisfy her professional curiosity and personal interest in recycling. She had asked for, and Rob had acquiesced in giving her a tour of two recycling facilities in Arusha. So while the rest of us slept in or wrote in our journals, Ann and Rob got up early and headed off to two sites where local workers sorted and processed metals, plastics, glass, and other stuff to extract some value from what was thrown away in the city.

The people doing the recycling were thrilled to see Ann, and one woman was especially interested in accompanying her back to America. 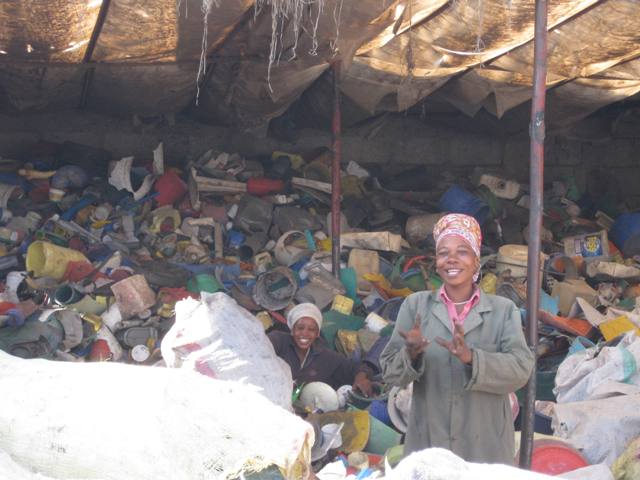 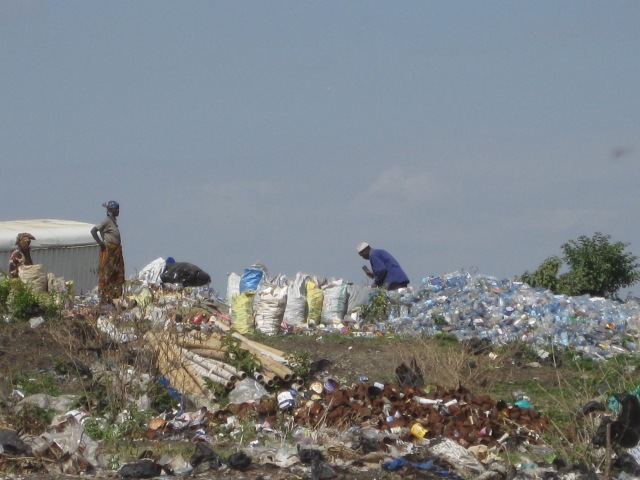 Running and Racing have been important parts of my life for as long as I can remember. I ran Track and Cross Country at Amherst HS, back in the day, and am proud to have been training and competing with the Cambridge Sports Union (CSU) for more than thirty years. If my bones hold out, I hope to continue for another thirty. Sixteen years ago, I began coaching, first as an Asst. Coach at Newton North HS in Newton, MA, and for the past ten years, as Head Track and Cross Country Coach at Concord Academy in Concord, Massachusetts. I've been writing about running for almost as long as I've been running, dating back to high school, when I would write meet summaries for the Amherst Record for about $0.33 per column inch. I've been blogging about running since 2005, and began blogging at "the runner eclectic" in 2014. Until recently I also had a day job, working full-time as a Technical Product Manager for Nuance Communications, based in Burlington, MA. But I am now on what might turn out to be a permanent sabbatical. Thank you for reading my blog, and please consider leaving a comment.
View all posts by Jon Waldron →
This entry was posted in Tanzania and tagged Arusha, Chadema, Recycling. Bookmark the permalink.