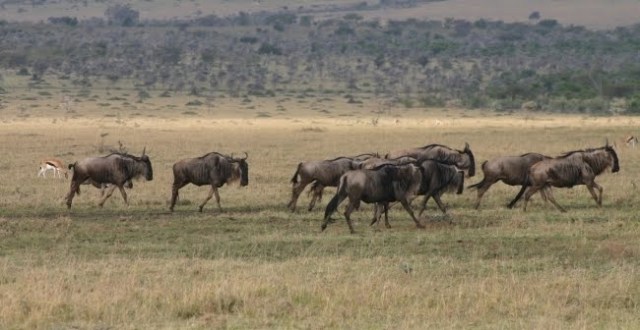 On the last day of 2010, after my final run of the year at the Dik Dik campground, I joined my family for an improvised New Year’s Eve feast prepared by Henry and assisted by Rob, who had squirreled away two bottles of wine among our basic provisions. There was an enclosed pavilion in the middle of the campground, and it was here, sitting at long metal tables fancied up with a simple paper tablecloth, that we dined and toasted the coming year. After our feast, and in spite of an unusually festive atmosphere in the camp, we made no attempt to stay up until midnight. Instead we retired early and fell asleep easily in spite of loud celebrations from a group of German campers nearby, who continued to laugh and sing their rollicking songs long into the night.

Waking up to the new year, we were, for once, not in a hurry to leave the camp site. With another full day of driving and game-watching ahead of us,  we took our time packing up the Land Cruiser, and didn’t get underway until almost 10:00. The plan called for us to work our way South, ending up at a place called Lake Nduto, where we would stay in another tented camp.

I’ve already mentioned that our itinerary was a little unusual in that we had entered the Park from the North, rather than taking the more usual route that enters the park near Ngorongoro crater in the South. Thus, our first view of the Serengeti two evenings earlier had been of gently rolling hills and low scrub forests. As we migrated South, however, the landscape opened up into broader, flatter plains.

The name “Serengeti” derives from a Maasai word that is usually translated to mean “endless plains.” As we drove further South, the full justice of the name began to dawn on us. No photograph or description can capture the scale of those plains, so vast that they seem capable of swallowing up entire massive herds of zebra and wildebeest in their silence. I can recall the sense of awe I felt then, and yet, there was something soporific about this part of the journey, and there were times that we drove for hours without seeing any change in the landscape.

Four of the roughly four million zebras that make their home in the Serengeti.

Here and there, the uniformity was broken by large outcroppings of granite called kopjes (an Afrikaans word meaning ‘small head’) rising up out of the landscape like ships of stone sailing through the vast ocean of grass. In the Serengeti, kopjes provide a distinctly different habitat that supports numerous birds and animals. For this reason, kopjes are a popular destination for the Safari vehicles. At one particularly magnificent kopje we were one of about a dozen Land Rovers parked to watch a leopard with her two cubs sunning herself on a high shelf of rock.

Aside from the kopjes, the plains are home to hundreds of thousands of herbivores, huge herds of wildebeest and zebra, as well as smaller bands of Thomson gazelles and other migrants who feed on the short nutritious grass covering the land. These animals are part of the great East African migration, a seasonal movement of game over a 1200-mile route in search of water and nutrition.

At this point in our trip, we had become prone to viewing the animals as characters in an ongoing drama, with each species representing various human qualities. Naturally, this led to picking favorites and taking sides, as we became spectators to their everyday struggle for existence.

It was, for example, easy to root against the hyenas, who we saw as gangs of thugs always slouching around plotting some new atrocity. Rob tried to put their behavior in context for us, but our prejudice was strong. So, too, it was easy to root for the elephants, especially the calm and imposing adults surrounded by happy extended families, seemingly untroubled by our presence or the presence of predators.

I admit that at the beginning of the trip, I had little interest in or respect for the wildebeest, or bearded gnu. ‘Silly looking,’ I thought, and probably not too bright. But then I saw them running, single file in long dusty lines and I changed my mind. The wildebeest impressed me as the true endurance athletes of the Serengeti, running for days at a time with a steady distance-runner’s gait, guided by the mysterious and crucial ability to find water in this dry land.

As for the lions, well, we all had different opinions about the lords of the Serengeti. Thanks to the skill of our guide, we had many opportunities to see lions “in action.” Most of the time, this meant seeing them sleep. Like all cats, they did a LOT of sleeping, at least while the sun was up. At Ngorongoro Crater a few days later, we would have our most impressive and bracing encounter with lions when three of them ambled slowly out of the grass and came straight toward our truck. It turned out that they only wanted to lie down in the shade of the row of Land Cruiser that had stopped by the side of the road.

On this day, we saw a lion couple late in the afternoon near Lake Nduto. When we first drove up, both lions were lying lazily on the ground, ignoring us, the paparazzi and gawkers, and apparently doing nothing.

After a few minutes, the male rolled over, hauled himself to his feet, circled the female once and then mounted her with what seemed like a particularly business-like attitude. This sequence took about 30 seconds total, and did not appear to impress the female very much. In any case, both lions were soon snoozing again. Rob explained that this was typical and that it would go on all day, with the male waking up every 15 minutes, initiating copulation, and then going back to sleep.

My son — who, by the way, had been growing a reddish, lion-like beard on the trip — remarked that he had found a new role model. The rest of us just rolled our eyes.

After a full day of wildlife viewing, we were ready to rest. We drove through a dry wilderness around Lake Ndutu, a maze of scrub forest with dried-up watering holes and dust everywhere. We arrived at the Lake Ndutu tented camp around 5 p.m. and were grateful to get out of the Land Cruiser and smell the familiar charcoal smell of cooking fires. We dumped our bags in the tents, and the others went to get drinks.

I had decided to run — to start the year off with a run before intentionally breaking my streak, so I changed into shorts and running shoes and began my usual routine of circling the perimeter of the camp. It was very dusty, and the charcoal smoke burned my throat, but I was happy to be moving after a long day of sitting in the vehicle. It was the 372nd day in a row that I had managed to run at least 3 miles and would, according to my plan, be the final run of my streak. It felt good. I also felt like I wouldn’t mind a day off.

Running at Lake Ndutu on new year’s Day, 2011– the final day of the streak.

When I was done running, I prepared to shower. The large, apartment-like tents at Lake Nduto were constructed with an ingenious contraption for hoisting a bucket of hot water up on a pole and then connecting it via a PVC pipe to a shower head that sprayed water down into a small shower stall within the tent. “Preparing to shower” meant telling the camp personnel in charge of heating up water, to bring a bucket to the tent and raise it up into position. Not for the first time, I felt a little uncomfortable to be the recipient of such lavish personal service.

Running and Racing have been important parts of my life for as long as I can remember. I ran Track and Cross Country at Amherst HS, back in the day, and am proud to have been training and competing with the Cambridge Sports Union (CSU) for more than thirty years. If my bones hold out, I hope to continue for another thirty. Sixteen years ago, I began coaching, first as an Asst. Coach at Newton North HS in Newton, MA, and for the past ten years, as Head Track and Cross Country Coach at Concord Academy in Concord, Massachusetts. I've been writing about running for almost as long as I've been running, dating back to high school, when I would write meet summaries for the Amherst Record for about $0.33 per column inch. I've been blogging about running since 2005, and began blogging at "the runner eclectic" in 2014. Until recently I also had a day job, working full-time as a Technical Product Manager for Nuance Communications, based in Burlington, MA. But I am now on what might turn out to be a permanent sabbatical. Thank you for reading my blog, and please consider leaving a comment.
View all posts by Jon Waldron →
This entry was posted in Tanzania and tagged Kopjes, Lake Nduto, Lions, Tanzania. Bookmark the permalink.