Tanzania – Part 9: Hippos, Elephants, and Eyes in the Dark 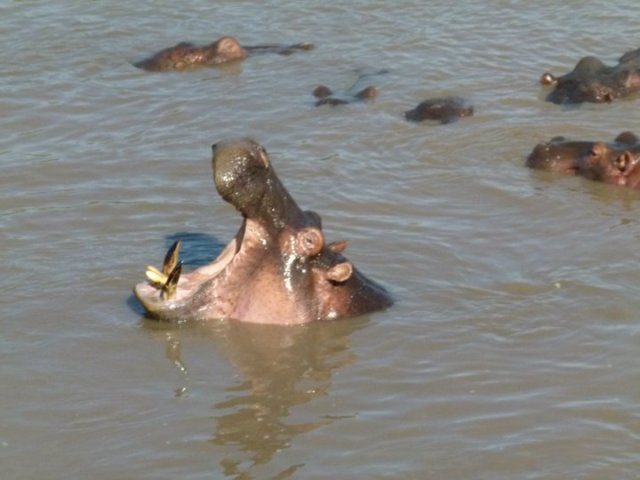 Running Log, 12/31/10 — 24 minutes in and around Dik Dik Campground
(Completing the year-long project of running every calendar day in 2010)

On the morning of December 31st 2010 I awoke from a heavy sleep and uneasy dreams to find myself safe inside a luxury tent. The pounding in my head from the previous evening’s entertainment had faded, and a sense of proportion had returned. It was still early and, for the moment, Mbuzi Mawe was quiet and peaceful as the sun came up on another perfect day in the Serengeti.

Rob had described our agenda for the day as a “full-day game drive” through the central Serengeti area known as Seronera. Up until now, we had been able to think of ourselves as intrepid travelers on a unique journey, traversing nearly impassable roads through Northern Tanzania, a solitary car driving through an empty landscape. But that impression didn’t survive the day, as we began to realize that our vehicle was merely one of a hundred nearly identical Land Cruisers careening around the network of dirt roads that infiltrated this popular area. Furthermore, we were all out there with basically the same objective: see as many animals as we could before the sun went down.

We had a pleasant breakfast of cereal, eggs, fruit, and coffee, but tried not to tarry unnecessarily as Rob kept reminding us that we wanted to get an early start. After breakfast we gathered our bags and hauled them down to the parking area so that Rob and Peter could load up the Land Cruiser. It was not yet 9:00 when we left the Mbuzi Mawe in search of wildlife.

After 15-20 minutes we made our first stop at a bluff overlooking a wide and relatively deep pool that was fed by one of many shallow streams that ran through the plain. I don’t recall the actual name of this spot, but it was known universally as “the hippo pool,” because it was filled even at this hour with submerged and partially submerged hippopotami seeking refuge from the sun and the heat of the day. It’s hard to capture through photographs the odd, understated grandeur of thirty to forty hippos of all sizes packed together in such a small body of muddy water, huge animate bowling balls in what amounted to little more than a bathtub.

As we watched with a mixture of awe and amusement, Rob explained that hippos are known to be ill-tempered and extremely dangerous when disturbed. Indeed, they are the second deadliest animal in Africa, responsible for more human deaths than any mammal besides man. It was hard to believe that these massive vegetarians who seemed willing to sleep all day in the pool, shifting positions occasionally with loud and comical grunts, would feel remorseless in trampling farmers to death when roaming the land at night. I could have watched them for hours. 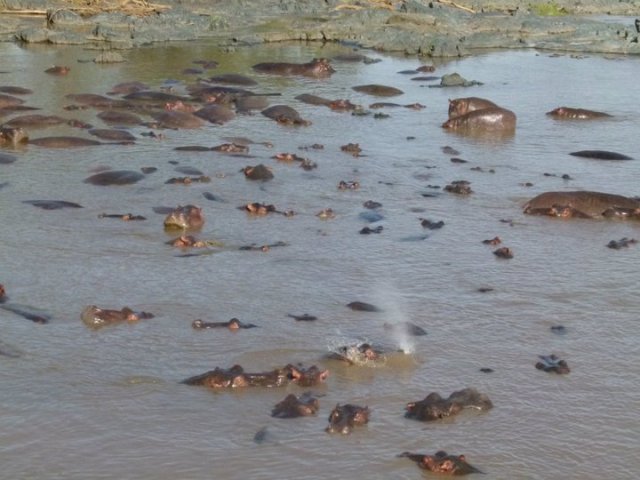 Hippo pool.
After leaving the hippo pool, we seemed to take a series of random turns — at least that’s how it felt to me. Sometimes it seemed that Rob had a definite destination in mind, but sometimes it seemed we were just circling aimlessly, waiting for something to happen, for some animal to make an appearance. From time to time we would pull up next to another Land Cruiser coming from where we were heading, and Peter or Rob would exchange news with the driver. There was an easy collegiality among the community of Safari guides. If one spotted a lion or leopard, soon dozens of other vehicles would descend on the spot, hoping to share in the spoils of the sighting.

We did, in fact, see some big cats that morning. A leopard with cubs, a jaguar in a tree, but my favorite animals from our first full day were the elephants. While driving on our aimless route, we came across a large herd of perhaps 100-120 elephants. We parked by the side of the road and watched as they made their deliberate way across the grasslands, some of them passing within a few dozen yards fo our vehicle. We must have spent an hour or more watching this procession. Among the herd were babies and adolescents, and they put on a show for us, wallowing and playing in mudholes near the road as though they hadn’t a care in the world.

Unlike watching hippos soak, watching elephants play in mud was a distinctly happy experience. Of all the animals we saw, the elephants (and perhaps the baboons) were the only ones who seemed free from the constant anxiety of having to hunt or avoid being hunted. I remember also feeling grateful that they were so good-natured, because when the larger elephants could have knocked over the Land Cruiser with little effort. 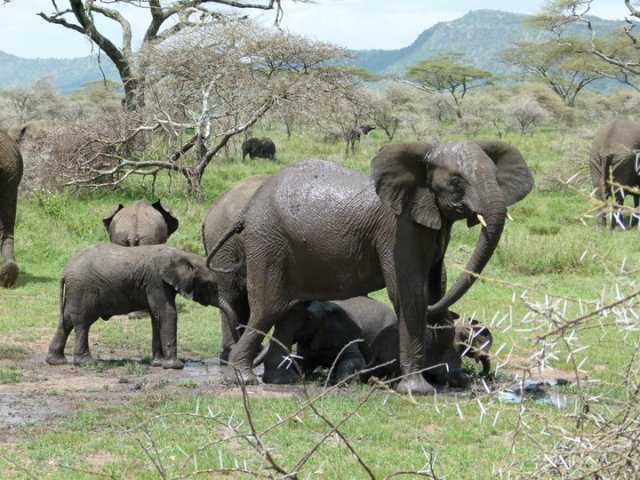 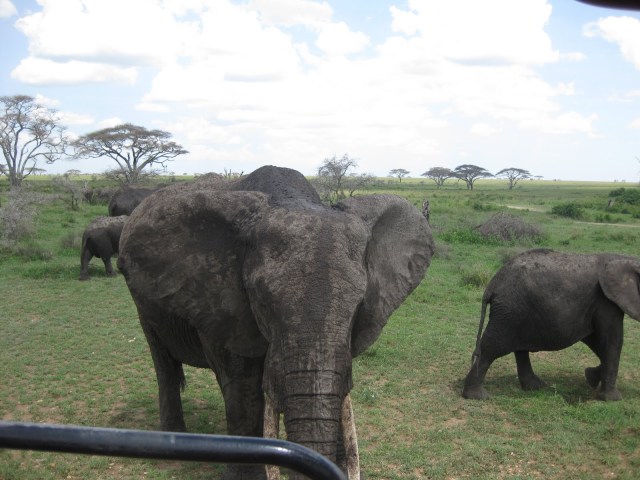 We come in peace.
It was late in the afternoon when we finally drove into the parking area at the Dik Dik campground. It must have been past six o-clock already, as the precious daylight was slipping away quickly. Although I had been able to forget the fact during our day of Safari, I was now keenly aware that I had, perhaps 35 minutes of twilight left to complete my goal of running every day in a calendar year. This was it. The last day of the year, and all other challenges met. Now it was just one more run in a place totally unsuitable for running.

I had packed my running shorts and running shoes in my backpack for easy access, so while the others unloaded their bags, I was off immediately to change, and a few minutes later was ready to go. The layout of the campground would make this one of the more challenging runs. There were tents everywhere, and to have a running route at all I needed to make my way from the parking area along the edge of the campground where the open area ended and the bush began, past the latrines and then up an access road that led to a second open area that was also full of tents and people. With a little creativity, I figured out how to make this into a loop, of sorts, rather than a back-and-forth, and I set out to get in my requisite 20 minutes.

The first “loop” took about four minutes. As I passed the Land Cruiser, Rob looked on with amusement and maybe even a little pride. I imagined him explaining my behavior to the other guides. “You see that mzungu running? He’s OUR mzungu. He exercises every day, even on safari!” I wondered what the other campers made of the sight of me gliding past their tents, forward and back, over and over. Surely there were other runners there. Maybe they were a little envious.

After the first loop, Joni decided that she wanted to strecth her legs, too, so she fell in step beside me and we ran one circuit of the campground together. She ran in flip flops and civilian clothes, and it was great. 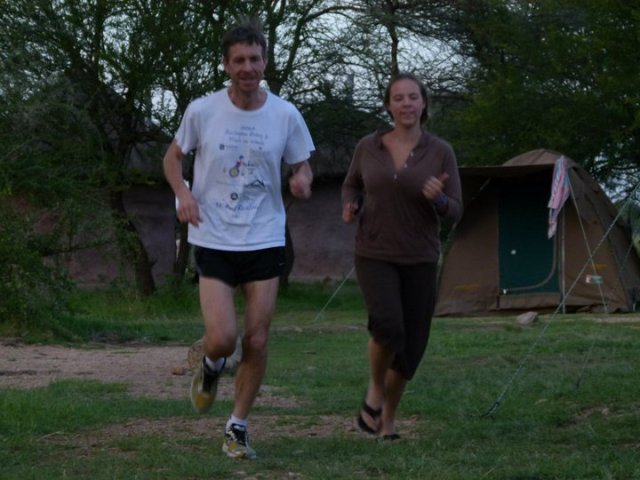 Running with Joni in the last ours of the last day of 2010.

As with all of my short, repetitive, campground runs, it took forever to run the first 10 minutes, and then the next 10 went by quickly and easily. As I passed the 20-minute mark and realized that I had brought my year-long running adventure to a successful conclusion, a very happy, peaceful feeling settled over me. I celebrated with one final loop in the gathering dusk, speeding up as much as I could without terrorizing the other campers. I savored the moment. It had been a long twelve months.

A final note about the Dik Dik campground where we spent New Year’s Eve: Back in 2007 when Joni was traveling in Tanzania with her friend Liz Gleason, they stayed at this same campground. After lights out, they fell asleep but awoke in the middle of the night to a low growling that came from something that was passing by their tent. It was the mutterings of lions walking slowly through the campground in search of whatever it is lions want at that hour. Joni and Liz lay in their tents frozen by fear. Eventually, after what seemed like a very long time, the lions moved on.

Joni wisely chose not to share this story with us until she was safely back in the United States. Still, it has become part of our family history — we refer to it as the night Joni and Liz met the lions — and we all had it in the back of our mind as we bedded down for the night in the exact same spot.

Thus, I admit, I was a little apprehensive and edgy as night fell. Returning from the latrine with a flashlight just before turning in for the evening, I met a couple standing on the edge of the campground looking out into the bush. “You can see eyes,” they said. Sure enough, when I pointed my flashlight out into the darkness, I could see the unmistakable gleam of yellow eyes reflecting the light back at me, staring in at the campground from perhaps 50-60 yards away. I realized we were a very small island in the very large ocean of the central Serengeti.

I didn’t mention this to Ann until the next morning. I wanted to make sure that at least one of us slept well that night.

Running and Racing have been important parts of my life for as long as I can remember. I ran Track and Cross Country at Amherst HS, back in the day, and am proud to have been training and competing with the Cambridge Sports Union (CSU) for more than thirty years. If my bones hold out, I hope to continue for another thirty. Sixteen years ago, I began coaching, first as an Asst. Coach at Newton North HS in Newton, MA, and for the past ten years, as Head Track and Cross Country Coach at Concord Academy in Concord, Massachusetts. I've been writing about running for almost as long as I've been running, dating back to high school, when I would write meet summaries for the Amherst Record for about $0.33 per column inch. I've been blogging about running since 2005, and began blogging at "the runner eclectic" in 2014. Until recently I also had a day job, working full-time as a Technical Product Manager for Nuance Communications, based in Burlington, MA. But I am now on what might turn out to be a permanent sabbatical. Thank you for reading my blog, and please consider leaving a comment.
View all posts by Jon Waldron →
This entry was posted in Tanzania and tagged Mbuzi Mawe, Serengeti, Seronera. Bookmark the permalink.