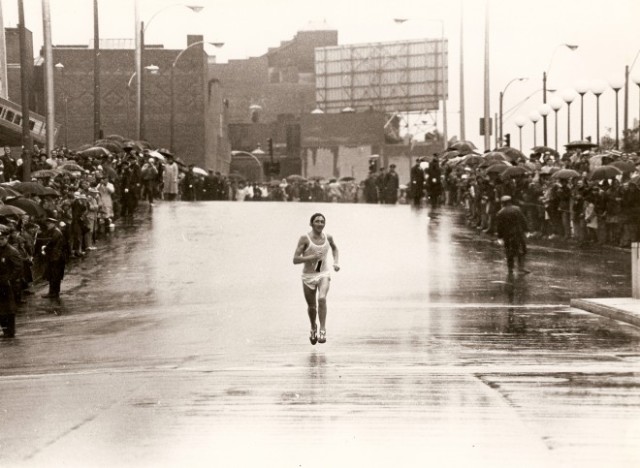 Ron Hill is one of the most accomplished runners living, and I, for one, wouldn’t think any less of him if he takes the day off.

It is a most remarkable and curious thing that the 76-year-old Hill, who won major marathons, set world records, and invented the most comfortable running pants the world has ever seen, might be best known as the bloke who hasn’t missed a day of running in 50 years. On December 20th, he logged a run of at least a mile for the 18,261st straight day (assuming I counted the leap years properly). He began his current streak in December 1964, and five decades and 160,000 miles later, he’s still hanging in there. I actually wrote about his streak several years ago when he hit 150,000 miles. Now the milestones keep coming, and really, what more is there to write?

He’s already shown that he is willing to run with broken bones, on crutches, and with any number of other afflictions that might make the rest of us pause before heading out the door. He’s answered all the possible questions about his sanity and judgement by basically ignoring those questions, outlasting them, you might say. When someone questions the wisdom of a practice, there’s nothing like living to a healthy old age to silence the doubters.

But the question that arises in my mind is what now? Do you bring the streak to an end with a planned gesture, a big send off, a la The Colbert Report? Or do you just keep logging those daily runs until one day it slips your mind? And then, do you sheepishly call up the local news and tell them it’s over, or do you never mention it, until the reporters come around for the 60th year in a row, and only then do you disappoint them. “Streak? What are you on about? That ended YEARS ago.”

On the other hand, why would he want to stop? The man clearly enjoys running. At least I hope he does. Somehow the thought that he might have been been keeping the streak alive even though it had become tedious for him would be profoundly disappointing. I like to think that what’s kept him going all these years is as simple as thinking that a day with a run is better than a day without, no matter what. If instead all of this consistency has been out of a sense of obligation, then really what’s the point?

Ron Hill can do what he wants, of course. If he feels like running tomorrow and the next day and the next, he’s welcome. But if I were in his shoes, I’d think about skipping my run on December 31st, and then starting a new streak in January 1st. I’d want to see whether I could recapture that little flicker of excitement at realizing that I’d run for a week without a day off, and then two weeks. Out with the old streak, in with the new, as it were.

Or maybe I’d look outside and say ‘to Hell with it,’ and go for a run anyway.

Running and Racing have been important parts of my life for as long as I can remember. I ran Track and Cross Country at Amherst HS, back in the day, and am proud to have been training and competing with the Cambridge Sports Union (CSU) for more than thirty years. If my bones hold out, I hope to continue for another thirty. Sixteen years ago, I began coaching, first as an Asst. Coach at Newton North HS in Newton, MA, and for the past ten years, as Head Track and Cross Country Coach at Concord Academy in Concord, Massachusetts. I've been writing about running for almost as long as I've been running, dating back to high school, when I would write meet summaries for the Amherst Record for about $0.33 per column inch. I've been blogging about running since 2005, and began blogging at "the runner eclectic" in 2014. Until recently I also had a day job, working full-time as a Technical Product Manager for Nuance Communications, based in Burlington, MA. But I am now on what might turn out to be a permanent sabbatical. Thank you for reading my blog, and please consider leaving a comment.
View all posts by Jon Waldron →
This entry was posted in Records & Statistics. Bookmark the permalink.

2 Responses to Ron Hill — 50 and Counting