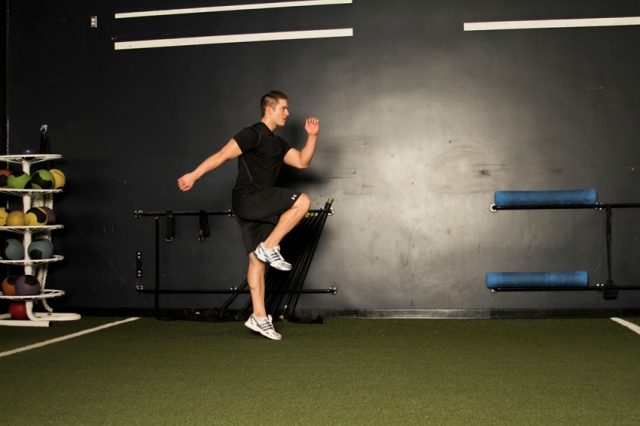 I was home sick Thursday night, and that was a shame because it meant I was missing our regular Thursday night indoor track workout. Instead of hammering out  400s, 600s, or 1000s, I was mouldering away at home, imagining myself getting slower with every sad, half-hearted sip of chamomile tea.

Skipping the track workout might or might not have been a good idea, but skipping itself was definitely on my mind. I had just been reading a curious essay, In Defense of Skipping, published on Slate.com. The article opens:

“Skipping is the one mode of bipedal transportation mysteriously—and unjustly—maligned as taboo. When in a hurry, we’re taught to dash with poise. When we have a free moment, we tend to meander. When we’re feeling jubilant—well, you can grin, but don’t let your joy show in your gait.”

The article goes to on to note all the health benefits of skipping, but also points out that skipping has a relatively high metabolic cost. Unless you happen to be on the moon or some other locale with lower gravity than earth, in which case skipping seems to be a perfectly reasonable form of transportation. But fair point, skipping is really tiring relative to walking or even running, and that’s likely why you don’t see adults skipping around town. It’s childish to indulge in an activity that represents such an extravagant expenditure of energy.

The article does not mention that skipping is one of the absolutely fundamental exercises used by athletes, and especially sprinters and jumpers, to prepare for and train the powerful toe-off from the ground that is so essential for explosive speed and force application. Even for distance runners, skipping can be highly beneficial. On Thursday nights, our warmup and cool-down routines involve skipping. It is a motion that works as a gentle transition from easy jogging to higher intensity running, or one that serves as a form drill to work on posture and foot flexion, as well as an activity that can serve as a demanding plyometric exercise (“skipping for height”, “skipping for distance”). The point is, there are tremendous potential training benefits to skipping.

At the beginning of every H.S. track season, there will be a moment when I ask everyone to skip, and I’ll usually add “like when you were a little kid.” It’s really interesting that skipping — such a demanding and coordinated motion — is such a staple of childhood. Is this evidence that we’re all sprinters and jumpers when we’re young, and then we grow out of our natural athleticism?

The article notes that after age 4-5, skipping becomes less common: “once children master running […] skipping wanes. They discover pretty quickly they can run at the same speed as skipping, and they’re a lot less tired while doing it.”

And that, the article suggests, is why it’s so odd to see an adult skipping, unless of course it’s an adult athlete, purposefully choosing to skip exactly because it’s more demanding.

Running and Racing have been important parts of my life for as long as I can remember. I ran Track and Cross Country at Amherst HS, back in the day, and am proud to have been training and competing with the Cambridge Sports Union (CSU) for more than thirty years. If my bones hold out, I hope to continue for another thirty. Sixteen years ago, I began coaching, first as an Asst. Coach at Newton North HS in Newton, MA, and for the past ten years, as Head Track and Cross Country Coach at Concord Academy in Concord, Massachusetts. I've been writing about running for almost as long as I've been running, dating back to high school, when I would write meet summaries for the Amherst Record for about $0.33 per column inch. I've been blogging about running since 2005, and began blogging at "the runner eclectic" in 2014. Until recently I also had a day job, working full-time as a Technical Product Manager for Nuance Communications, based in Burlington, MA. But I am now on what might turn out to be a permanent sabbatical. Thank you for reading my blog, and please consider leaving a comment.
View all posts by Jon Waldron →
This entry was posted in Training. Bookmark the permalink.