Belated Gratitude for the US Olympic Marathon Trials

Molly Seidel and Aliphine Tuliamuk in the final miles of the U.S. Olympic Marathon Trials in Atlanta, February 29, 2020.

Six weeks ago – Saturday, February 29th, 2020 –the finest marathoners in the United States gathered in Atlanta to race for a berth on the U.S. Olympic team. In retrospect, it seems remarkable that the race took place at all. Had we been more alert, we might have understood that holding a marathon (two, actually, including the mass participation race the following day) was ill-advised. It was only days later that we all began to realize that neither Athletics nor anything else would proceed normally in 2020. But on that Saturday morning, I don’t remember having any such concern; all I can remember from that day is the excitement and the appreciation I had for all the athletes who had trained for years to be there, and who were ready to give the race their best shot.

It was that same weekend that the Tokyo Marathon went forward. That is, the elite race went forward without the participation of the roughly 38,000 entrants in the non-elite field. Atlanta might easily have made the same decision. But either way, that weekend now looks like the sharp dividing line between the world we used to know and the one where assembling large crowds is considered madness.

Looking back on that day now, from the perspective of a country and a world disrupted by pandemic, the Olympic Trials seems surreal. Watching it again, it’s hard not to cringe at the sight of athletes packed in tightly at the start, spectators standing shoulder to shoulder along the route, and exhausted runners embracing at the finish. But another part of me wants very much to forget all that and to go back to a time when those same scenes brought pleasure and the knowledge that the races were a celebration of what I love best about running.

What a race it was! Whether watching NBC’s live coverage of the leaders or tracking the runners who never appeared on camera, we were treated to superb races memorable for their record fields, late-race battles, and stunning upsets. One could hardly ask for more from an event, and I remember thinking that the actual Olympic Marathon would never live up to the thrilling drama of the Trials.

In the immediate aftermath of the races, I sampled some of the message board chatter, including breezy commentary about the favorites who had “gone home devastated.” Those comments seemed especially empty to me. I simply felt no need or inclination to rank the performances or to criticize – from the safety of my mediocrity — those who had competed and had fallen short of their own hopes on this particular day. I had, it seemed, ceased to be a fan with a fan’s obsession about places and times; or at least I had lost my ability to view the results objectively. Instead, I just kept thinking about how every runner in the race had contributed to creating something unbelievably special.

It wasn’t that I didn’t care who won; I loved seeing runners on the podium who had been overlooked or disregarded. Riley? Taliamuk? Seidel? In what dream do those runners make the Olympic team? And yet, there they were, clutching their American flags at the finish, unlikely but fitting representatives for Tokyo. The other three were inspiring in other ways. Rupp was enormously impressive, defending his 2016 victory without ever looking troubled. Kipyego, who held off Des Linden for third, looked as competent as she ever had on the track. And then there was the seemingly ageless Abdirahman, making his fifth U.S. Olympic team at age 42. It was crazy that for the second straight Olympic Games one of America’s top three marathoners would be over 40 years old.

But as surprising and inspiring as those races were, what I really loved about the Olympic Trials was the unprecedented depth. These trials had the largest field ever. As I perused the results, trying to reconstruct the races for each of the runners I knew or had followed, I felt enormous pride and appreciation. I knew that some of those runners had run wonderful races, although they never showed up on camera and would never be interviewed for their stories.

I also knew that many runners had fallen short of their own high expectations. No marathon is easy – not preparing for it and not executing on the day. A thousand little things can go wrong. And even if there is no external reason, subtle errors in pacing can lead to disastrous consequences late in the race. I pored through the splits of many runners, and those splits told me how hard it had been for those who gambled with the early pace and lost.

I didn’t see these runners as failures. Again, I didn’t feel like a fan, but like a member of an extended team where triumphs and disappointments are shared, and we know that no matter how much we analyze after the fact, the reason that some runners have amazing days and others struggle is always a bit of a mystery. As the great Australian distance runner Ron Clarke is supposed to have said, the only real failure is not taking part.

No one expected that the Olympic Trials would be one of the last races, national or local, that we’d see for a long time. Since the first week of March, all we’ve heard are cancellations and postponements. The Olympics are now postponed to 2021.The Boston Marathon might happen in September, although that looks increasingly doubtful. Spring Track and Field has been wiped out. We’ll all be a lot older when things return to normal, and some opportunities will be gone forever.

There have been a few discussions about whether to re-run the Trials next year. I’m in favor of letting the results stand and leaving our Olympic team intact. At the same time, a lot will change in 18 months for the runners and for the world. Nothing will make the build-up to 2021 a perfect replacement for 2020.

It turns out that the Olympic Trials was it: one last expression of all that we loved about distance running before we were forced to become even more solitary than we already were. Though it probably was a bad idea, I can’t help feeling grateful that the races took place. They’ve always held a special place in my heart. They’ve always managed to weave together the worlds of the professionals and the talented amateurs, the runners with six-figure shoe contracts, and the neighbors who get up at 5:30 every morning to log mileage before heading off to a full-time job. If the Olympics are about being anointed as an immortal, the Olympic Trials are about being one of the hundreds of dreamers who have no realistic chance to make the team but run with courage and determination anyway. The Trials are for the long-shots, the no-shots, and the runners whose miracle and honor is making it to the start at all.

In these strange and anxious times, I find my thoughts turning again and again to those races in Atlanta. If there had to be one final race, one final parade of trials and triumph to send us off into our uncertain, self-imposed quarantine, I’m glad it was that one. 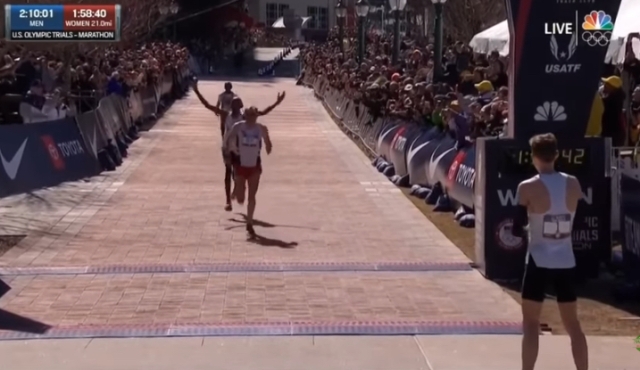 Running and Racing have been important parts of my life for as long as I can remember. I ran Track and Cross Country at Amherst HS, back in the day, and am proud to have been training and competing with the Cambridge Sports Union (CSU) for more than thirty years. If my bones hold out, I hope to continue for another thirty. Sixteen years ago, I began coaching, first as an Asst. Coach at Newton North HS in Newton, MA, and for the past ten years, as Head Track and Cross Country Coach at Concord Academy in Concord, Massachusetts. I've been writing about running for almost as long as I've been running, dating back to high school, when I would write meet summaries for the Amherst Record for about $0.33 per column inch. I've been blogging about running since 2005, and began blogging at "the runner eclectic" in 2014. Until recently I also had a day job, working full-time as a Technical Product Manager for Nuance Communications, based in Burlington, MA. But I am now on what might turn out to be a permanent sabbatical. Thank you for reading my blog, and please consider leaving a comment.
View all posts by Jon Waldron →
This entry was posted in Marathon, Olympics, Pro Runners and tagged Olympic Marathon Trials, Olympic Trials. Bookmark the permalink.

1 Response to Belated Gratitude for the US Olympic Marathon Trials