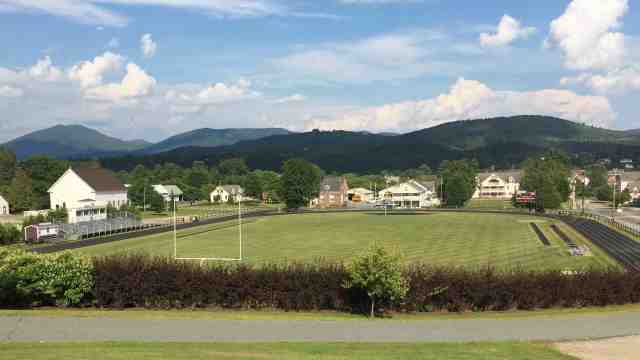 Everything about Jack Harris is solid. Although his close-cropped hair is mostly gray now, his body is still unusually strongly built — especially for a distance runner. As for his face, his perpetually alert expression and steely blue eyes suggest that he has seen a thing or two in his fifty-plus years, and that he is prepared for almost anything, including bears, bad guys, and other rural hazards that might turn up to trouble the good people of Lyndonville. Jack Harris is the police chief here.  He is also the track and cross country coach at the Lyndon Institute in town, and a staff coach at the Northeast Kingdom Running Camp, which comes up to use Lyndon State College for two weeks every summer. 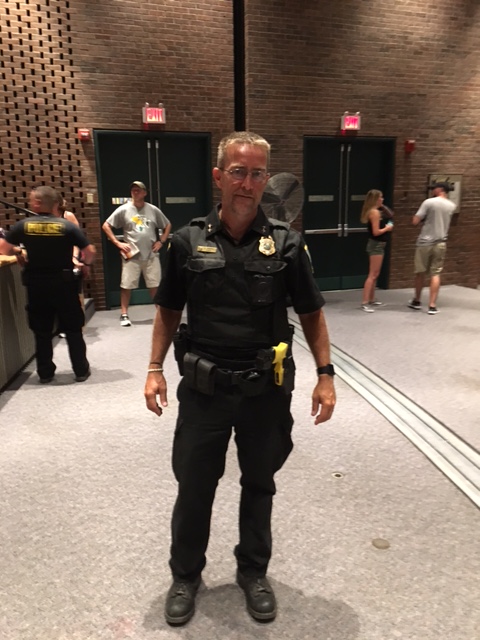 Two summers ago, I met Jack when I came up to NKRC for the first time, and “auditioned” for a staff coach position. Although I’ve never had any interest in camps, and had no idea what I was supposed to do, I instantly felt at home among the many other coaches, junior staff, and high school runners who trekked up to Lyndonville, many hours from their schools in New Jersey, New York, Connecticut, and Massachusetts. It turned out I already had connections to many of the coaches, and every conversation ended with a  discovery of something we had in common.

On one particularly idyllic afternoon at camp, I asked Jack to tell me about the outdoor track where his high school athletes train and compete. I always saw the track as I drove through town, coming down from or going up to the Lyndon State campus, and I always wondered about it. I had worried that he would think I was being facetious when I told him about my project to write about the unusual or noteworthy outdoor tracks that I encountered in my travels, but he had responded with enthusiasm and a wealth of information and stories.

The track still seems new, although as I write this in 2017, it has already seen fourteen spring seasons of use. The black all-weather surface was done as part of an overall that was completed in 2003. The new facility was dedicated in that year as the Bob Heath Track, honoring a long-time coach at the Institute. The new track replaced a dirt track that (Jack told me) had been surveyed prior to being replaced and found to rise 2-3 feet from its East end to its West end. That meant that for many years, athletes who felt like they were running uphill to the finish line were not wrong. On that old track back in the 1970s, a local girl named Judi St. Hilaire had set school records for the 100 meters and 200 meters that, despite being run mostly uphill and on dirt, still stand. After her glory days as a sprinter at the Lyndon Institute, St. Hilaire went on to become one of the world’s best distance runners in the 1980s, and capped her fine career by finishing 8th in the 10,000m final at the 1992 Barcelona Olympics.

It’s very strange to think that an Olympic athlete began her track career in this tiny town, and it reminds me of Arthur Lydiard’s observation that there are potential champions in every small village, they only need the opportunity and encouragement to succeed.

The new track is in a beautiful spot, with the main building of the Lyndon Institute overlooking the track from a small hill to the West, and a gorgeous view of mountains across the valley to the East. Right next to the track, the town cemetery is visible through thick yew hedges behind the stands along the home straight. 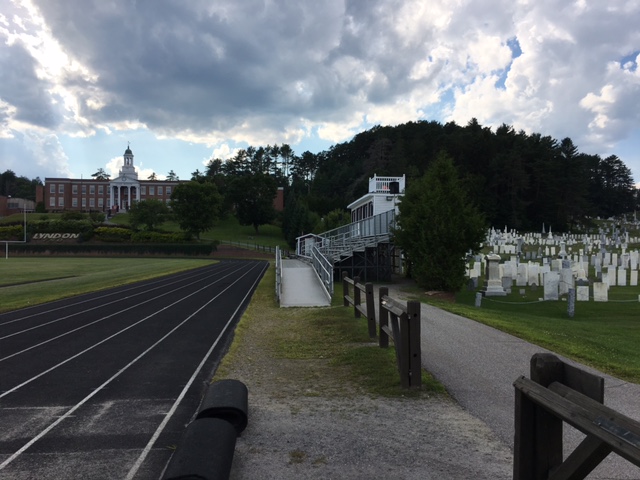 The geometry of the track is unusual, if not altogether unique. To accommodate the space it has to work with between the Institute, the cemetery, and roads on two other sides, the track has unusually wide curves that measure 120 meters long in Lane 1, meaning the straights are only 80 meters long. Jack tells me, although I have yet to verify the information, that this is the widest “standard” track layout. I ought to have tried running on the track, but being at running camp means running twice a day with campers, and I have yet to sneak out to do a workout or even a set of strides on those short straightaways. 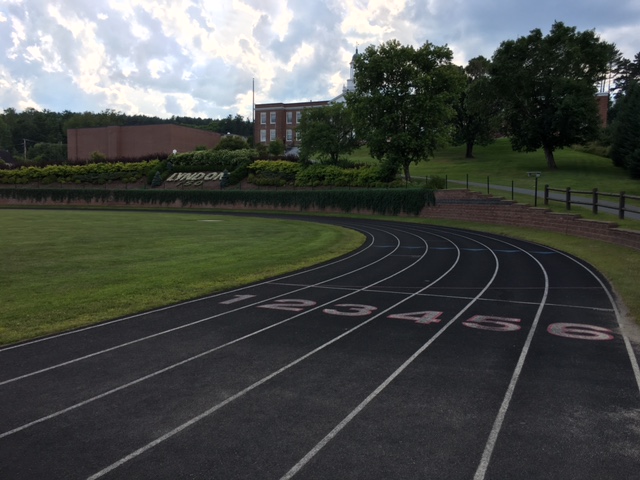 Being in Northern Vermont, the track is not used much before April. It’s usually covered by snow until then, and sometimes until much later. I asked Jack about the challenge of training outdoors in a cold climate, and he told me that the Lyndon Institute track team isn’t allowed to take shovels to the track so many early season workouts involve running intervals through snow or slop. Also, the first home meet for the LI Vikings isn’t scheduled until May, only a couple of weeks before the Vermont H.S. State meet.

The rest of the facility is intelligently laid out, with two shot put circles on opposite sides of the infield, with grass sectors facing inward. The circles have sector lines marked within the circle,  design which leads me imagine using them for obscure medieval rituals. 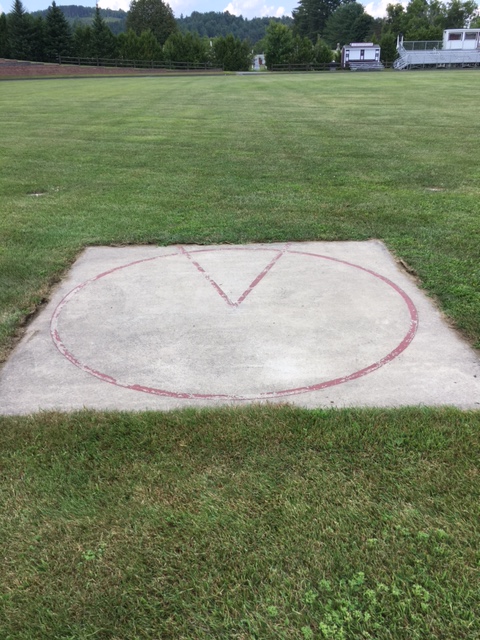 There are two jump runways, a high jump apron, and a pad for pole vault mats. According to Jack, the team also uses the infield for discus and the javelin, although I see no discus circle or cage on my visit, and can’t imagine that the throwers practice at the same time as everyone else.

On the “rest day” between the first and second week of camp, I was driving past the track on my way to get lunch in town with another coach, and we saw someone running really fast. I remarked that it looked like sub-25-second 200 pace.

Of course, we had to stop the car and watch. And then I became very curious about who was out on a Saturday afternoon, in a light summer drizzle, training so hard. I parked the car and got out, and walked over to the track. As the runner walked back towards us, and before he had time to start his next rep, I asked him about his workout. It turned out he was a decathlete, currently competing in college, and he, too had gone to the Lyndon Institute, where he had been State Champion in the pole vault, among other accomplishments.

It was strange to me that this track in a quiet corner of Vermont seemed able to produce champions every time I looked.

Running and Racing have been important parts of my life for as long as I can remember. I ran Track and Cross Country at Amherst HS, back in the day, and am proud to have been training and competing with the Cambridge Sports Union (CSU) for more than thirty years. If my bones hold out, I hope to continue for another thirty. Sixteen years ago, I began coaching, first as an Asst. Coach at Newton North HS in Newton, MA, and for the past ten years, as Head Track and Cross Country Coach at Concord Academy in Concord, Massachusetts. I've been writing about running for almost as long as I've been running, dating back to high school, when I would write meet summaries for the Amherst Record for about $0.33 per column inch. I've been blogging about running since 2005, and began blogging at "the runner eclectic" in 2014. Until recently I also had a day job, working full-time as a Technical Product Manager for Nuance Communications, based in Burlington, MA. But I am now on what might turn out to be a permanent sabbatical. Thank you for reading my blog, and please consider leaving a comment.
View all posts by Jon Waldron →
This entry was posted in Field Guide to Tracks, Uncategorized and tagged Judi St. Hillaire, Lyndon Institute, Lyndonville, Track dimensions. Bookmark the permalink.