Summer Schedule: Who knew retirement would be so busy? I’m going to try a new schedule of posting every Monday, perhaps more often for special occasions like the World Championships or for multi-part stories like the most recent one. Feel free to throw praise or money my way to try to guilt me into posting more often. 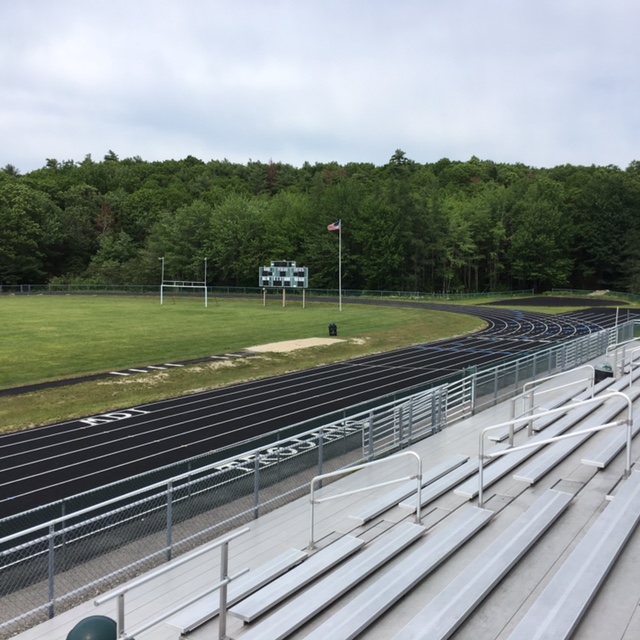 The MDI H.S. Track: Home of the MDI Trojans

On a typical summer day on Maine’s Mt. Desert Island, the parking areas near Eagle Lake fill early, and by mid-morning, an overflow of hundreds of vehicles line the sandy shoulders of Route 233, a two-lane highway that connects downtown Bar Harbor to the East with Somes Sound — a natural fjord that divides the island into two large but unequal lobes — to the West.

Millions of visitor come to Mt. Desert Island every year to experience the beauty of Acadia National Park, and Eagle Lake is one of the more popular access points to the many miles of dirt carriage roads that loop through the interior of the park. Anyone wanting to hike, bike, run, or ride in horse-drawn carriages through Acadia finds their way to the carriage roads.

Approximately two miles West of the Eagle Lake parking lot is the entrance to MDI High School. For the locals, the high school is a center of activity and civic life for much of the year, but by late June, it’s pretty quiet. A few cars are parked in the teacher lots. There are a handful of maintenance vehicles in the large lot in back of the school. On this Tuesday afternoon, there is exactly one car occupying a space within shouting distance of the tennis courts, and beyond that, the MDI High School track. That car is mine.

My family and I have a long relationship with MDI. Over 80 years ago, my father’s father had a summer cottage built on the Western side of the island, and would bring his family — my father and his siblings — to spend a good part of every summer there. The island was my father’s second home, or maybe his true home, and it was natural that he brought his family up every summer, as his father had done.

About twenty years ago, my sister, Karen, moved to Bar Harbor, and became a “local,” one of a few thousand year-round residents of a town that absorbs a summer population of almost 30,000, which doesn’t include the more casual tourists who stay there for a few days or weeks.  Although I’m not a local, I’m not quite a tourist either. And so maybe it’s not so strange that I would feel comfortable making an annual pilgrimage to the MDI High School track for at least one workout. I have been doing this for at least ten years, and I have yet to encounter another runner on the track. Although it doesn’t show up in the lists of Acadia’s natural wonders, the track in summer offers the kind of solitude that I crave. 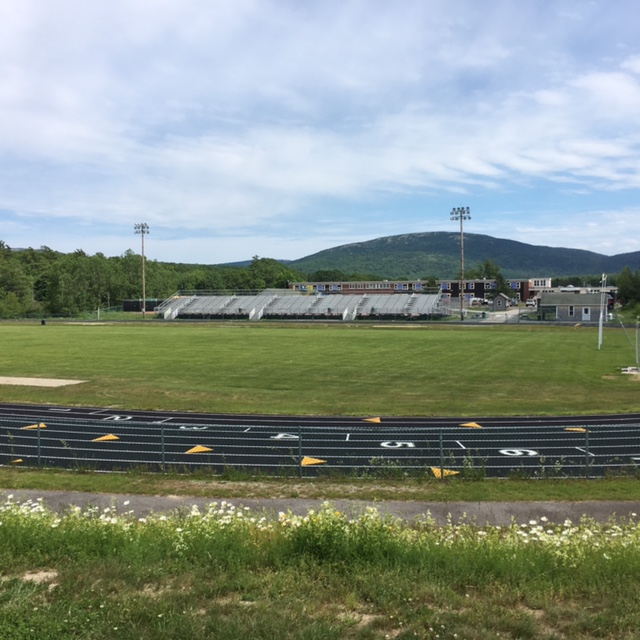 Wildflowers in the foreground, and what I believe is Sargent Mountain in the background — another quiet summer afternoon at the MDI H.S. track.

The track itself is unusual in several respects. To begin with, it is a full eight-lane track that seems to have been designed to handle large, invitational meets. In addition to the eight lanes, which is already a bit unusual for a small high school, the track facility includes four horizontal jump pits, as well as a separate runway and concrete pad for the pole vault. (Curiously, when I visited, the pole vault standards were still out, although the mats were not, giving that area a ghostly feel.) 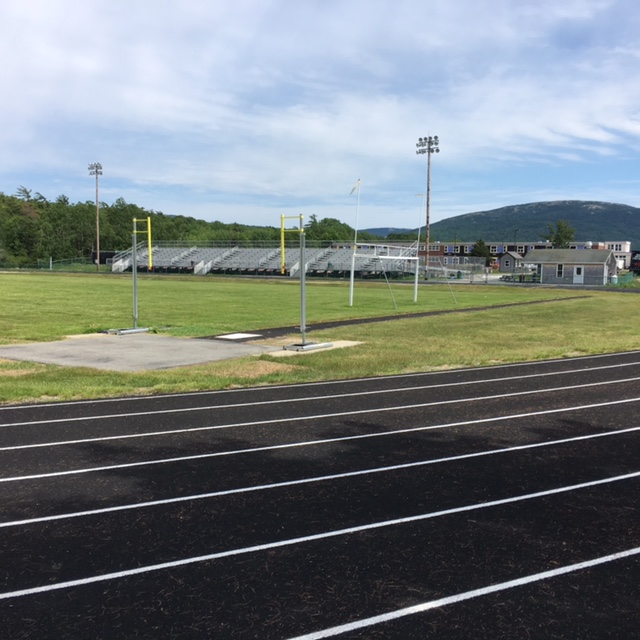 The track also has unusual dimensions. Instead of the IAAF standard geometry, or the common “equal quadrant” design, the MDI H.S. track was constructed with freakishly long and broad curves. An IAAF standard track has straights of 84.39 meters, and a curve that measures 115.611 meters along the measure line of Lane 1. By comparison, the MDI track has straights only slightly more than 80 meters, and a curve that measures approximately 118 meters in Lane 1. Others might have a different experience, but while hammering out 400m repeats, I begin to feel lost and abandoned on those curves.

There are other curiosities here:

On the home straight, as clear as day there are start lines for 50m and 55m dashes, races that are not (outdoors) at the high school level. I speculate that this has something to do with use of the track for middle school, or even elementary school track meets. Whatever the reason, the presence of these lines is absolutely unique in my experience. 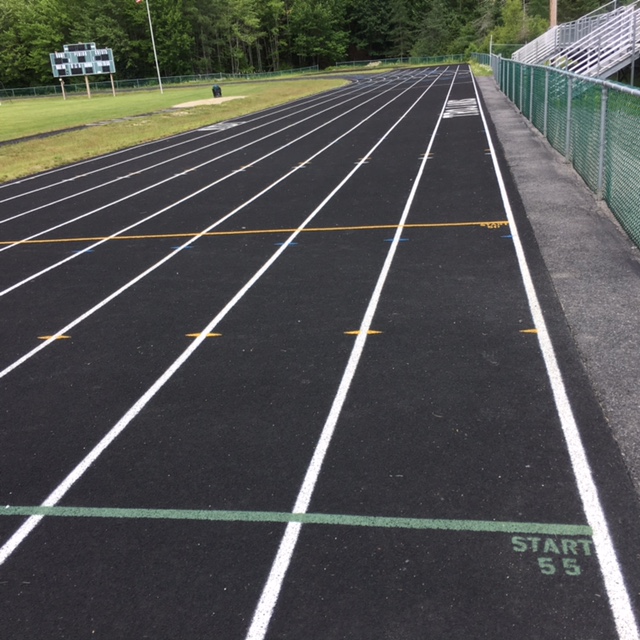 Another curiosity for what one might assume to be a provincial facility, without new-fangled technology, is the presence at the finish line of the white board used with fully automated timing (FAT) systems. To my eye, this provides further evidence that those who preside over this track have promoted it as a central facility suitable for hosting league or Maine State Championships. 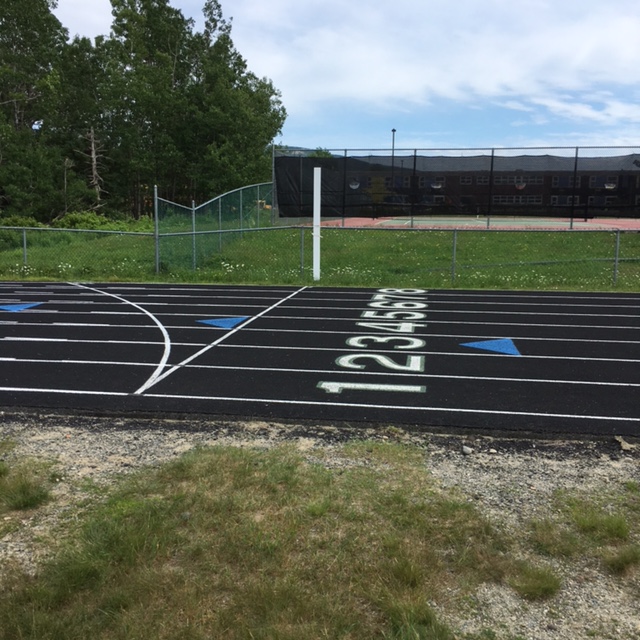 On a future visit, I’ll have to track down the coach or Athletic Director at the high school to hear the history of this track. Surely on late spring days it is a hive of activity, and perhaps on weekends the parking lot is full of buses bringing teams from all over the State. The life of a track is defined by its community of users: those who toil on it each afternoon of the spring season, those guests who attend the parties it throws, and those who visit infrequently, like me, who want the familiar experience of working out even in the midst of an otherwise lazy vacation.

Running and Racing have been important parts of my life for as long as I can remember. I ran Track and Cross Country at Amherst HS, back in the day, and am proud to have been training and competing with the Cambridge Sports Union (CSU) for more than thirty years. If my bones hold out, I hope to continue for another thirty. Sixteen years ago, I began coaching, first as an Asst. Coach at Newton North HS in Newton, MA, and for the past ten years, as Head Track and Cross Country Coach at Concord Academy in Concord, Massachusetts. I've been writing about running for almost as long as I've been running, dating back to high school, when I would write meet summaries for the Amherst Record for about $0.33 per column inch. I've been blogging about running since 2005, and began blogging at "the runner eclectic" in 2014. Until recently I also had a day job, working full-time as a Technical Product Manager for Nuance Communications, based in Burlington, MA. But I am now on what might turn out to be a permanent sabbatical. Thank you for reading my blog, and please consider leaving a comment.
View all posts by Jon Waldron →
This entry was posted in Field Guide to Tracks and tagged Acadia, MDI, Mt. Desert Island. Bookmark the permalink.