Ah, Kyoto, city of temples and trains, ancient capital city and elegant modern metropolis, surrounded on three sides by mountains and monks; home to three million strangers and Samaritan to one stressed-out American traveler; destination of my first train journey in Japan, beating heart of all my travels from which I departed and to which I returned again and again before taking my final leave.

One day I wandered your streets without a clear plan and ended up in a great wooden temple where they provide bags for you to carry your shoes after you’ve removed them and the world’s dust.

One day I gazed up into the vault of your central train station, filled with awe, a pilgrim among the throng, pushing and crowding the floor of a great cathedral.

One day I rode a bicycle miles along your canals and ate exotic sweets near the campus of your great University.

One day I boarded a fast train from your clean, meticulously marked platforms, watching it arrive within seconds of its appointed time.

One day – towards by the end of my stay – I realized I could find my way to the Otsu train in my sleep, and felt a sudden desire to ride the trains long into the night.

One night I drank beer and sake in a Japanese chain restaurant with Tyler’s family and their friends, and rode the subway late on a Sunday night and felt safer than if I had been strolling the streets of Newton.

But have I fallen under your spell without really knowing you at all? Does every tourist fall for you like this after a few days, finding in your thousand-year-old calm some consolation for being so far from home? Are you like the fascinating woman I met at a party once and with whom I talked for barely five minutes, knowing at the end of that time only that I didn’t want it to be the last time?

Up until now, I’ve been writing this journal more or less chronologically, and I’ll return to my conventional narrative in a moment. But I think it’s worth trying to step outside the day-by-day chronicle once of twice to think about what places and interaction made a lasting impression, and why. I didn’t see that much of Japan in my short time there, but I saw enough of Kyoto to imagine myself living there. That’s a crazy thought, but I think it’s not crazy that in grappling with the strangeness of other places, we try to imagine ourselves being part of them, which is another way of saying that we try to imagine ourselves stepping outside the familiar confines of our current lives.

A friend tells me that unpacking a suitcase is a matter of a few minutes, but unpacking the experience of travel takes a lot longer. With that in thought in mind, let me resume my journal, but with a promise to revisit certain places at a later time to understand what it was about them — or me – that made such a strong impression.

I returned from Hiroshima on Monday night, February 27th. On Tuesday, Tyler as he moved out of the AirBnB and moved into the room provided for him at the Biwako hotel, which served as race headquarters. The room instantly made me insanely jealous. It was on the 10th floor with a gorgeous view of the Lake, and it was easily twice, if not three times the size of the cramped – I’m sorry, cozy – apartment we had been sharing.

But it was a good day. I got a run in, and was able to hang out in Tyler’s hotel room and get a lot of writing done. (Oddly, from this day to the end of our stay, the two of us fell into a pattern of using the other’s accommodations. Tyler would head over to the AirBnB to cook his specific and familiar meals, and I would head over to his hotel room for the opportunity to sit down at a desk. So for the several days we were frequently going back and forth between our two “homes.”)

On Wednesday, I went into Kyoto for the one really organized sight-seeing activity of my entire trip. I had signed up for a Cycling Tour, based on a recommendation I had seen on TripAdvisor.com prior to leaving for Japan. Wednesday turned out to be an ideal day, with bright sun and cool temperatures that were ideal for a light two-wheeled travel. I would follow a guide and a small group around various sites, and then, when the tour concluded at 12:30, make my way to the town of Yamashina where I would meet two friends of Tyler’s family who lived there. They had generously agreed to drive the marathon course with us so we could see exactly what was in store for Sunday. After meeting them in Yamashina, we’d drive together into Otsu to pick up Tyler.

I met the leader of the Cycling tour and the rest of the group at Kyoto Station at 8:45. In my group besides our tour guide, Yumi, were an American couple, a British couple, and another Japanese woman. Our itinerary would take us past a number of sites on East side of the city. The best thing about the tour was that, for the first time since arriving, I didn’t have to spend any mental energy thinking about where I was going and how to get there, and had only to follow someone else’s directions.

Yumi, our Kyoto guide, showing us the way

We began the tour by heading East from Kyoto station until we reached the Kamo River. We then cycled North along the river for 2-3 miles, stopping at various points for pictures and for our guide to point out some an interesting building or site of cultural significance: a traditional wedding hall; a school for Geisha; the Gion District, famous for its traditional tea houses and Kansai-style private clubs. After a while, we left the river and headed East once more, stopping at the Heian Shrine, which (I read later on Wikipedia) was built to commemorate the city’s 1100th anniversary. Yumi provided us with what seemed to me suspiciously simple explanations of Shinto religious beliefs, taught us the proper way to ask favors of the gods, and invited us to take lots of pictures, including a picture of what she said was the largest gate in Japan.

One of the buildings at Heian shrine 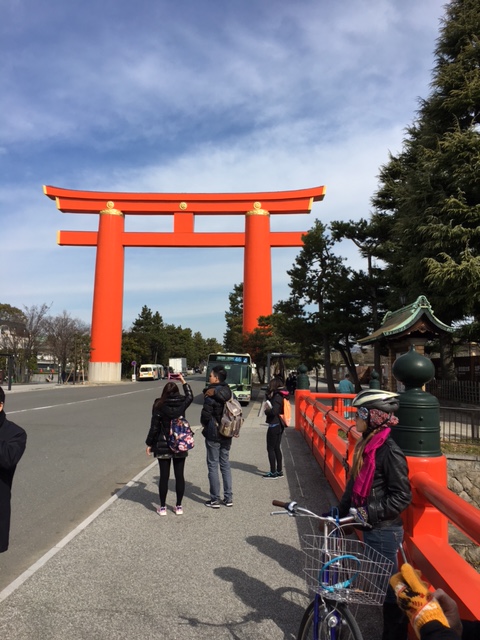 After the Shinto shrine, and prayers for what we wanted in this life, we cycled further East and uphill to the Nanzen-ji Buddhist temple, where – according to Yumi – we could contemplate the afterlife. I was more interested in contemplating the aqueduct that had been built to bring water from Lake Biwa, ten kilometers away, to the city, which lay spread out below us to the West.

I did enjoy this place, though, and found it very peaceful. Yumi said there were a thousand temples in Kyoto, Nanzen-ji being one of the most famous.

Our last excursion took us along the “Philosopher’s Path,” a lovely and intimate two kilometers that wound through small neighborhoods and passed near three more temples before ending near Kyoto University. Although it was too early for cherry blossoms, it was easy to imagine what a magical and peaceful place it would in a few weeks when all the cherry trees were in bloom.

We ate sweet pastries at a shop near the University, and then cycled home, or rather back to Kyoto Station, where I was just in time to catch the train to Yamashina.

It had been a good morning, and I was ready for a different kind of tour, as I waited for Tyler’s friends to pick me up and drive me to the marathon course.

Running and Racing have been important parts of my life for as long as I can remember. I ran Track and Cross Country at Amherst HS, back in the day, and am proud to have been training and competing with the Cambridge Sports Union (CSU) for more than thirty years. If my bones hold out, I hope to continue for another thirty. Sixteen years ago, I began coaching, first as an Asst. Coach at Newton North HS in Newton, MA, and for the past ten years, as Head Track and Cross Country Coach at Concord Academy in Concord, Massachusetts. I've been writing about running for almost as long as I've been running, dating back to high school, when I would write meet summaries for the Amherst Record for about $0.33 per column inch. I've been blogging about running since 2005, and began blogging at "the runner eclectic" in 2014. Until recently I also had a day job, working full-time as a Technical Product Manager for Nuance Communications, based in Burlington, MA. But I am now on what might turn out to be a permanent sabbatical. Thank you for reading my blog, and please consider leaving a comment.
View all posts by Jon Waldron →
This entry was posted in Japan, Uncategorized and tagged Japan, Kyoto. Bookmark the permalink.