The morning sun shines in Otsu.
(The sign says: “In case of emergency, break through here and you can evacuate next door.”)

Friday, February 24 – finally, the sun came up bright and much more cheerful in Otsu.

From the balcony of our apartment, we could see mountains rising above the crazy quilt of rooftops below. I was hungry – I hadn’t eaten much over the last few days, and I had already eaten the only snacks I had brought with me. The previous afternoon, I had eaten some of Tyler’s stash of carbohydrates that he was saving for his carbo-loading the following week, but he had gently reminded me that I would need to find my own calories. He did let me “borrow” a banana, though. I also had some coffee, although there was no sugar in the apartment, so it didn’t do much to sate my appetite. With one thing and another, it was about 10 a.m. before I managed to get my running stuff on and get out the door with a plan to head down to the Lake and along the shore for a few miles.

With all that had happened the previous week – leaving my job, taking to my bed with illness, and then traveling for 30 hours, I hadn’t run a step in over a week, and it felt like it. It was less than half a mile to the lakefront from the apartment, but I struggled right away with heavy legs and an ache in my lungs that might have been illness or might have been the normal way lungs feel when you haven’t used them properly for so long. “Remember this, and never make fun of non-runners again,” I thought to myself.

Thankfully, there were plenty of sights to distract me along the lakefront. There was a large riverboat, the “Michigan,” docked at a pier and ready for excursions. It was a strange sight here, as it would have looked completely at home chugging down the Mississippi River on its way to New Orleans. There was the ten-story Biwako Hotel, which I knew was the host hotel for the Marathon, there were fallow gardens and amphitheaters along the broad brick promenade the stretched away to the South.

But most impressive of all was the Lake itself. At 63 kilometers long and 23 miles across at its widest point, Lake Biwa is the largest freshwater lake in Japan, and it is a spectacular sight. The Lake is surrounded by mountains, many of them snow-capped despite the relatively mild climate of this part of Japan. Otsu (“big harbor,” in Japanese) is located at the Southwest corner of the lake, and hosts boat races and other events during warmer months of the year.

The Marathon course would start at Ojiyama stadium, a few miles away. The first 600m would be on the track and then, after briefly heading North, the course would turn South onto a highway that followed the lake shore until the 15Km mark before crossing a bridge and heading North for another 6Km on the other side to the turnaround. The second half of the race would be the first half in reverse, including a final 600m on the track.

I finished up my run, arriving back at the apartment, where I spent a fair amount of time trying to figure out how to take a shower. The arrangement of toilet, sink, shower, and bath, was significantly different than an American bathroom. For one thing, the toilet is not in the same room as the sink/shower/bath. I believe this is true in most Japanese homes, although I noted later than Japanese hotels catering to Western visitors have no issue co-locating toilet and bath in the same general area. The second thing I noticed is that even this tiny, tiny apartment had a bathtub, although it was very narrow and deep. It took me a few moments to realize that the “room” that contained the tub had its own drain, and that it was for showering, leaving the bathtub for bathing only.

After my shower, Tyler and I set off to find a store where we could buy a few things for the apartment, including another mattress, and food. I hadn’t had much for breakfast, and I was really starting to miss food. (It occurred to me at some point, that maybe one of the reasons that I’m not a good traveler is that I too often ignore the need for food until it’s the only thing I’m thinking about. It’s hard to be delighted by a new place on an empty stomach. But I digress.)

Perhaps it would be interesting to describe Japanese department stores, or speculate on why it seems to be impossible to buy a loaf of bread with crusts in Japan (what happens to all those crusts?), but I fear it would become tedious. So let me summarize the rest of the afternoon by saying that we found a good, cheap mattress for my bed, found food that would keep me alive for a couple more days, took a taxi with our purchases back from the store (I gave the address in Japanese.. and the driver actually took us fairly close to where we wanted to go!), and struggled again to stay up until 9 p.m. I wasn’t nearly at 100% yet, but I had solved some practical problems.

The next day was even nicer than the one before. And I felt a little better, too, although still not 100%. Sleeping on a better mattress had helped, and breakfast helped, too. With these things taken care of, the project for the morning was to visit Ojiyama stadium, where the Marathon would begin and end a week from Sunday.

It was about 2K to the stadium, and we found an open entrance and went right in and beheld a gorgeous eight-lane track. In every corner of the track, groups of athletes were practicing their events. Distance runners were running long intervals. Sprinters were doing accelerations. Hurdlers were doing drills. Javelin throwers were throwing javelins. It was hard to tell, but it was either multiple track clubs, or a single track club that spanned a wide range of ages from grade-school age kids to high school or possibly even college. It was a familiar chaos, and immediately made me long for my own track team back in Concord.

Tyler was planning  few 500s, just for some turnover work in advance of his final tuneup workout the next day. He also wanted me to find out whether the track would be open on Sunday, because ideally, he’d do that workout — a 10K run starting at marathon pace and ending considerably faster — on the track.

I asked the first person who looked knowledgeable whether the track was open on Sunday. He didn’t know, but accompanied me all the way to an office in the bowels of the stadium where I repeated my question to a very official looking man sitting behind a glass window. He listened, and then crossed his arms in front of him in an “X” and said (I think) “Tsukaenai!” — “(You) can’t use it.” Even if I wan’t sure of the word, I understood the meaning just fine. I went back to give Tyler the news.

By this time he was about ready to run his 500s, so I did what coaches do and prepared to read him splits. Around me, there were other coaches and assistants yelling out splits in Japanese. I suddenly had a moment of perspective, realizing that to everyone around us, Tyler and I were the foreign athlete and coach, conferring in our foreign language, as though we were hiding something. We might as well have been speaking Swahili. 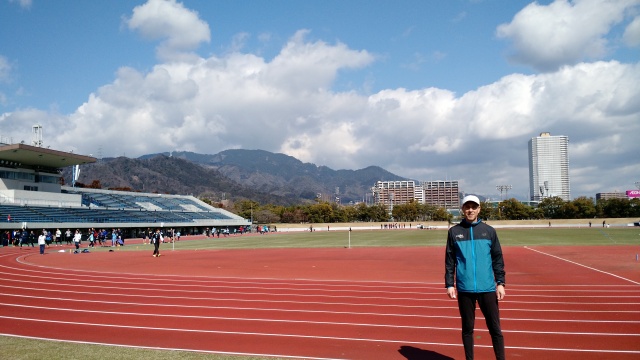 The next day, Sunday morning, we returned to the vicinity of the stadium and discovered that the reason we couldn’t use the track was that the field was being used for a series of soccer matches. Fair enough. Tyler had scouted some other options, and in the end settled for a 730m loop around a large sandlot where baseball teams played. The first half of this loop actually was part of a larger 1K measured loop, so it had highly accurate 200m and 400m splits. Why didn’t he run the entire 1K loop 10 times? The latter half of the 1K had a section on bricks, and ever since the Doha 50K, Tyler has avoided bricks like they were kryptonite. He would rather do his tempo run by completing 14 laps of the 730m loop, 10.22K, with me providing splits every lap.

It was a beautiful morning, and it was very pleasant standing there, watching baseball players nearby, watching parents play with their kids in a playground about few dozen yards away. Every 2:20 I would give Tyler his splits, but that didn’t take much work.

Apparently Tyler was enjoying himself, too. He ran the first ~5K at his target marathon pace, and then immediately sped up. By the end he was flying, shirt off in the warm sun, and happy to be running fast on tapered legs. When it was all over, we reviewed the splits, noting that this was the fastest (and one of the easiest) of his “one-week-out” workouts — that is, workouts done one week from a big race. It was certainly a good sign, and boosted his confidence quite a bit. And the best thing — not a shred of jet lag.

We jogged back to the apartment well satisfied with the morning. Tyler was done with the hard work for the day, but I had other plans.

The previous day, I  had taken possession of my precious Japan Rail Pass. The JR Pass would allow me to ride most of the national trains almost anywhere in the country. Having finally started feeling at home in Otsu, and still suffering from jet lag, I was going to travel again, this time to Hiroshima, 330 kilometers away to the Southwest.

After a quick shower, I packed my backpack, said good-bye to Tyler, and gave a wistful look at my comfy mattress, then headed out the door, heading for the train station.

Running and Racing have been important parts of my life for as long as I can remember. I ran Track and Cross Country at Amherst HS, back in the day, and am proud to have been training and competing with the Cambridge Sports Union (CSU) for more than thirty years. If my bones hold out, I hope to continue for another thirty. Sixteen years ago, I began coaching, first as an Asst. Coach at Newton North HS in Newton, MA, and for the past ten years, as Head Track and Cross Country Coach at Concord Academy in Concord, Massachusetts. I've been writing about running for almost as long as I've been running, dating back to high school, when I would write meet summaries for the Amherst Record for about $0.33 per column inch. I've been blogging about running since 2005, and began blogging at "the runner eclectic" in 2014. Until recently I also had a day job, working full-time as a Technical Product Manager for Nuance Communications, based in Burlington, MA. But I am now on what might turn out to be a permanent sabbatical. Thank you for reading my blog, and please consider leaving a comment.
View all posts by Jon Waldron →
This entry was posted in Japan, Uncategorized. Bookmark the permalink.