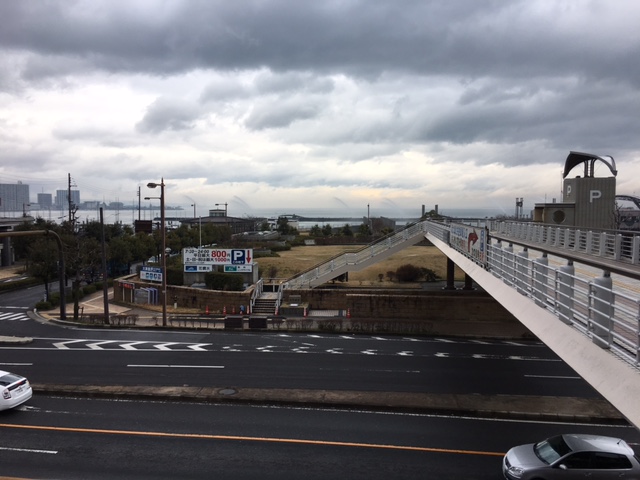 Water spouts at the harbor welcome me to Otsu, on the shore of Lake Biwa.

Tyler tells me that we first started talking about Japan back in June 2016.

The original idea was for him to enter the Tokyo Marathon in late February. Thinking about his goals and schedule constraints for 2017 (and considering the generous travel allowance from his sponsor, Hoka), Tokyo seemed like a good option on all fronts.

However, it turns out that it’s very difficult for a non-Japanese runner to enter Tokyo without a world-class marathon time (i.e., sub-2:08). So, in the fall, when he needed to nail down his winter/spring racing schedule, he made a tweak to the plan and decided to run a different race in Japan, the Lake Biwa Mainichi Marathon on March 5, a mere week after Tokyo.

There was some talk about whether I might go, too, but with work and school, the possibility seemed remote. That situation changed when I decided to leave my job. What had seemed far-fetched suddenly seemed doable, and a rare chance to travel to a place I had never thought to see.

I haven’t seen many of Tyler’s races as a pro. I didn’t go to Doha either time he ran there, and I didn’t go to Houston or Hudson Mohawk or CIF or Burlington… But there was something different to me about the chance to accompany him on his trip to Japan. For one thing, it would be a chance to use the small amount of Japanese I had acquired years ago when studying the language with colleagues at Interleaf. For another thing, he was paying for the ticket (with miles he had acquired from traveling to other races).

The whole plan appeared to be perfect. I would leave my job, travel to Japan, and return just in time to begin coaching the spring Track season. I wouldn’t miss a beat. With some trepidation – the kind that always accompanies momentous decisions – in early January, I told Tyler to help me find a flight.

Alas, not quite perfect, as it turned out.

For one thing, my school had published the wrong start dates for track, and when they corrected their error, it became clear that the first week of the season would find me in Osaka. Oh well, I thought to myself, we can start a week late and not be too badly off.

The second shoe to drop was on Saturday when newly liberated from my work, I promptly caught a nasty virus. By Saturday afternoon, I noticed my head didn’t feel right and my throat was sore and scratchy. After nine hours of fitful sleep, I woke up feeling feverish. I took my temperature and it was over 101 F and climbing. I went back to bed and slept for another two hours, got up to make tea (which I kept forgetting to drink), took a nap on the couch, woke up for a second time and took my temperature again (101.7). The rest of the day and ensuing night I was either asleep or in a zombie state.

If there is a silver lining to falling seriously ill a few days before a long journey – perhaps the longest journey of one’s life – it might be the way that an illness slows down physical and mental activity to a crawl, affording ample opportunity to think.

Unfortunately, the only thing I could think about was how I was scheduled to board a flight in two days that would take me halfway around the world. In my fevered state, It seemed very hard to imagine it would really happen.

I left Boston on Tuesday morning, 2/21, and arrived in Osaka late Wednesday night. I fully intend to post updates about that trip and what I’ve seen and felt since, but my energy is still really low, so I beg a little indulgence.

Running and Racing have been important parts of my life for as long as I can remember. I ran Track and Cross Country at Amherst HS, back in the day, and am proud to have been training and competing with the Cambridge Sports Union (CSU) for more than thirty years. If my bones hold out, I hope to continue for another thirty. Sixteen years ago, I began coaching, first as an Asst. Coach at Newton North HS in Newton, MA, and for the past ten years, as Head Track and Cross Country Coach at Concord Academy in Concord, Massachusetts. I've been writing about running for almost as long as I've been running, dating back to high school, when I would write meet summaries for the Amherst Record for about $0.33 per column inch. I've been blogging about running since 2005, and began blogging at "the runner eclectic" in 2014. Until recently I also had a day job, working full-time as a Technical Product Manager for Nuance Communications, based in Burlington, MA. But I am now on what might turn out to be a permanent sabbatical. Thank you for reading my blog, and please consider leaving a comment.
View all posts by Jon Waldron →
This entry was posted in Japan, Uncategorized. Bookmark the permalink.