Not A Christmas Carol 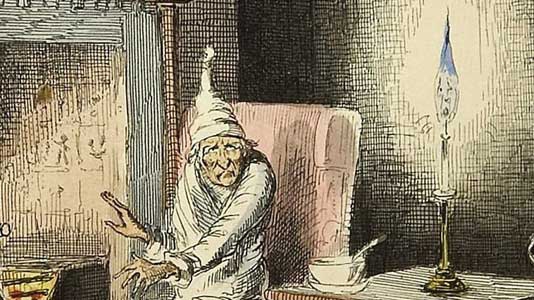 It was Christmas Eve, and the Ghost of Christmas Past glanced at the last name on his list and thought to himself, “This will be easy as figgy pudding.”

It had been a good night so far. He had already played his part in the soon-to-be-realized spiritual redemption of two business moguls, a corrupt politician, and the publisher of a tabloid newspaper… now he had just one more soul to save… a regular guy, according to his notes, living in a small place in the suburbs. It just went to show, he thought, that it wasn’t always the bigwigs who lost the Christmas spirit and needed to be shown the error of their ways.

As the clock struck, the G. of C. P. appeared out of thin air to the surprised mortal, whom we shall call Kevinezer Scrooge, and announced his intention to conjure visions of happier Decembers, before avarice and ambition had hardened Kevinezer’s heart against Christmas and those less fortunate than him.

In a trice, the Ghost and Kevinezer seemed to be floating in the air, and then a scene appeared below them, of a family celebrating Christmas Eve together.

“Hey, is that my family?” said Kevinezer. And so it was, but everyone was incredibly stressed out dealing with the unrealistic expectations of preparing for the day to come. Food had to be prepared. Presents had to be wrapped. Tensions were high. In the living room, there was a somberness that comes only with the knowledge that the Patriots have clinched another AFC East title.

“Hmmm, I think we should try another vision,” said the ghost.

Another scene appeared. An office party. People were loud and drunk. Many of them were wearing Santa Claus hats, but bore little resemblance to that old elf. The D.J was playing one cheesy Christmas “classic” after another. Kevinezer saw his younger self chatting with a beautiful young woman. “It’s Mariani!”he cried excitedly. At that moment, the two of them saw the younger Kevinezer lean forward towards his date to make sure he would be heard over the din, and said, “Let’s get out of here,” and the two of them left.

“You see how you made a fateful decision that you regret to this day? said the Ghost.

“What are you talking about, that was the best decision I ever made. That party was lame. Mariani and I had a great time, and it didn’t involve listening to ‘Jingle Bell Rock,’ which isn’t even a rock song, by the way.”

Now the spirit seemed confused. “But didn’t you turn your back on Christmas and give up your friends, and colleagues, and the only woman who ever truly loved you?”

“Are you kidding? My ‘colleagues,’ as you call them, were shallow jerks. And I didn’t see a whole lot of peace on earth and good will towards men at that party, did you? Nah, I was happy to leave, and I was the luckiest guy in the room because Mariani decided to leave with me.”

“I’m actually getting kind of bummed out,” said the Ghost. “I think we need to head back now.”

“Yeah, sorry about that,” said Kevinezer. “But hey, thanks anyway,” and he made a mental note to put ‘Great Expectations’ on his reading list.

Some time later, Kevinezer was greeted by another visitor. “I am the Ghost of Christmas Present,” announced a new voice, and a tall, ghostly figure shimmered and shone in the darkness.

“Oh, hi,” said Kevinezer. “So how does this work… are you going to show me the poor and destitute and people less fortunate… Bob Cratchit and Tiny Tim and all?”

“Ok, well just so you know, I donate to Doctors Without Borders, Partners in Health, Oxfam, and the American Red Cross. Plus, I don’t make the schedules at my work, and if it were up to me, we’d all have four-day work weeks anyway. And,” he added after a pause,”I voted for Clinton.

The ghost stared at him hard for a moment, and then continued:

“Just look at the damn vision!” and in an instant, Kevinezer beheld about a dozen people sitting around a table, including a couple he knew, various in-laws, and some younger children. The table was piled with more food than the people could possibly eat, and that didn’t include the several pies waiting on the sideboard. A vigorous argument was underway, apparently because someone had made a dumb political remark. Some of the kids were playing with their mashed potatoes.

‘Jingle Bell Rock’ was playing on bluetooth speakers in the kitchen.

“Why do people get so mad at each other during holidays,” Kevinezer asked. “It’s so dumb,” but the Ghost didn’t say a word. He just scowled, and then waved his hands. Another vision appeared.

It was snowing, and the wind was howling. Two poor and downtrodden figures could be seen trudging through the drifts, making their way slowly up the road.

“Behold those less fortunate than –”

But before he could finish, Kevinezer had jumped up and shouted happily, “It’s Terry and Patrick! They decided to do their long run on Christmas after all!”

The Ghost slapped his hand to his luminous forehead and disappeared.

The Ghost of Christmas Yet to Come was a piece of work. His face was hidden by the hood of his black cape, and he held a scythe in his skeletal right arm.

He didn’t say a word, but gestured with a bony figure for Kevinezer to look at the vision that was taking shape before them.

A churchyard. A small knot of mourners dressed in black. A black gash in the ground for the grace. A coffin. A gnashing of teeth and a wail–

“Excuse me,” interrupted Kevinezer. “I don’t care what else happens to me, but Mariani knows I don’t want a funeral at a church. And the coffin must be for someone else. I’ve arranged to be cremated.”

The Ghost looked at Kevinezer, or tried to — it was difficult for him to see from under the folds of the hood, which was beginning to feel a little over-the-top.

“I mean, if my friends want to have a memorial service, that’s up to them, but it won’t be in a church,” he continued. After a moment he added, “Maybe at Bertucci’s…”

The Ghost stamped his feet and struck his scythe on the ground with impatience. He gestured again, and the again the scene changed before them. A woman was weeping… it was Neely Spence Gracey! And then another woman joined her, also weeping… it was Kara Goucher! One by one, other elite distance runners appeared, all of them mourning the loss of their social media friend.

“Wow this is great. Thanks, spirit!” said Kevinezer under his breath, “But if Mariani finds out about this, she’s going to KILL me.”

The grim spectre, the Ghost of Christmas Yet to Come, made an angry gurgling sound and attempted to break the scythe over his knee. When it failed to break, he flung it away and buried his head in his hands before vanishing into the early morning mists.

“This has been the best Christmas ever,” said Kevinezer, as he updated his Facebook status with a link to Steve Martin’s “Atheists Don’t Have No Songs“.

Running and Racing have been important parts of my life for as long as I can remember. I ran Track and Cross Country at Amherst HS, back in the day, and am proud to have been training and competing with the Cambridge Sports Union (CSU) for more than thirty years. If my bones hold out, I hope to continue for another thirty. Sixteen years ago, I began coaching, first as an Asst. Coach at Newton North HS in Newton, MA, and for the past ten years, as Head Track and Cross Country Coach at Concord Academy in Concord, Massachusetts. I've been writing about running for almost as long as I've been running, dating back to high school, when I would write meet summaries for the Amherst Record for about $0.33 per column inch. I've been blogging about running since 2005, and began blogging at "the runner eclectic" in 2014. Until recently I also had a day job, working full-time as a Technical Product Manager for Nuance Communications, based in Burlington, MA. But I am now on what might turn out to be a permanent sabbatical. Thank you for reading my blog, and please consider leaving a comment.
View all posts by Jon Waldron →
This entry was posted in Attempts at Humor. Bookmark the permalink.

1 Response to Not A Christmas Carol