Track and Field thrives with only a few fans 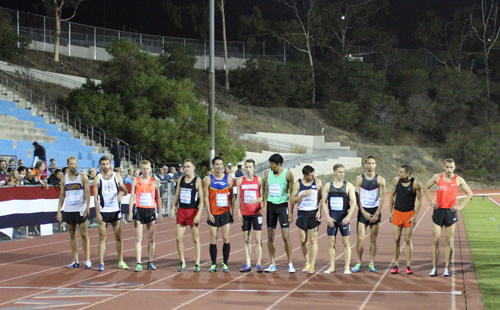 I always swore that I wouldn’t write a blog post about the sad state of Track and Field, or — even worse — attempt to formulate a prescription for how to revive it. First of all, what do I know? And second, I’m suspicious of the premise.

I don’t mean Track and Field in the United States is perfectly healthy. It’s not hard to find controversy, whether it’s related to actual or suspected PED use, political issues roiling the national organization, unpopular business practices by certain shoe companies, or athletes losing sponsorship. And that’s just the professional level. A different set of concerns plagues collegiate Track and Field, for example, Universities shutting down their programs and/or cutting their scholarships. And then there is the reality that Track and Field is just not that popular as a spectator sport, at least compared with any other major sport in this country.

So the sport’s in trouble, right?

Well, maybe, but then how should we think about the unprecedented amount of activity happening in Track and Field right now, and the immense amount of coverage and information available online?

At the college level, individual program might be threatened, but the overall level of competition seems as high as ever. The NCAA Division I Championships took place over four days last week, and produced at least one performance for the ages, when Texas A&M freshman Donavan Brazier won the 800 in a mind-blowing 1:43.55, breaking a 50-year-old collegiate record and recording the third-fastest time in the world this year. Brazier is only 19. Mississippi State’s Brandon McBride was second in 1:44.50, a time that would have won every previous NCAA 800m final, but left him almost a second behind the unreal performance of Brazier.

At the pro level, there have been high performance meets around the country almost every weekend over the last few weeks, including several in the Boston area. A week and a half ago, Concord hosted the Adrian Martinez classic, with races for youth, high school, first-timers, masters, and pro runners. In that meet, Concord-Carlisle senior Tom Ratcliffe ran a 4:01.50 mile to become the fastest MA high school runner of all time. On Saturday, the final Battle Road Track Club high performance meet took place at Bentley College. The meets annually attract runners from pros to high schoolers looking for fast times. Like the Martinez Classic, there is absolutely no charge to watch the meet, and spectators can see national class talent up close with little hassle. And then, this coming weekend, there will be another big event when the Adidas Boost meet comes to town. In addition to the traditional meet, there will be a “street meet” on Charles Street next to Boston Common.

Of course, all the pro action is leading to the Olympic Trials and the Olympic Games in Rio later in the summer, a quadrennial showcase for Track.

Checking the USATF-NE outdoor track schedule, the summer is absolutely full of more opportunities to run track. There are numerous all-comers meets, youth meets, masters meets, and a few more competitive meets like the New England Open and Masters championships.

There is more track and field than ever, and more of it is being streamed live on the Web, so if you can’t make it to a meet, there’s a decent chance you can watch it from the comfort of your laptop.

And yet, the odd thing is that with all of this track and field, there really aren’t a lot of fans watching. Most adults simply don’t follow the sport at all, even if they like sports, generally. My son is a good example of this. He’s following the NBA championships, the Stanley Cup playoffs, the Major League baseball season, the Copa America, but he probably couldn’t name a single current American track and field athlete. And he lives in the same house as me!

The very fact that high performance track meets are often free and yet sparsely attended suggests that the appetite for watching track and field is limited to a few diehards. There always seems to a discussion about how to address this, and the introduction of the spectacle of street meets is one response to this challenge. But in spite of these efforts, the audience remains stubbornly small.

Another symptom is that there seems to be no demand for better TV coverage. I know I should be thankful when Track gets on TV at all, but unfortunately, coverage is dumbed-down and selective, and announcers are often under-informed about who is running what, and don’t do a great job of covering any event that strays from the pre-ordained storyline.

All of these things point to a paradox. Track is wildly popular and at the same time a fringe sport. There are millions of kids who participate, but they don’t become fans when they grow up. Few people know anything about the history of the sport. When informed that he had broken Jim Ryun’s half-century old record, Donavan Brazier admitted that he had no idea who Jim Ryun was.

But you know what? Maybe that’s ok. Maybe we’ve been thinking about this all wrong. The rise of modern professional sports has brought tons of money to players, owners, etc., and perhaps Track and Field has not fully shared in this windfall. Pro Track and Field athletes don’t make a lot of money, because they don’t command the same attention and don’t drive the same TV viewership. But maybe that has allowed the sport to flourish in obscurity, relatively speaking, and has inspired more creative approaches — mini-meets, street meets, distance festivals, beer miles, etc. There’s something about Track and Field that reminds me of minor league baseball. There might not be a lot of fans, but there are a lot of creative approaches to keeping the few fans happy and entertained.

Running and Racing have been important parts of my life for as long as I can remember. I ran Track and Cross Country at Amherst HS, back in the day, and am proud to have been training and competing with the Cambridge Sports Union (CSU) for more than thirty years. If my bones hold out, I hope to continue for another thirty. Sixteen years ago, I began coaching, first as an Asst. Coach at Newton North HS in Newton, MA, and for the past ten years, as Head Track and Cross Country Coach at Concord Academy in Concord, Massachusetts. I've been writing about running for almost as long as I've been running, dating back to high school, when I would write meet summaries for the Amherst Record for about $0.33 per column inch. I've been blogging about running since 2005, and began blogging at "the runner eclectic" in 2014. Until recently I also had a day job, working full-time as a Technical Product Manager for Nuance Communications, based in Burlington, MA. But I am now on what might turn out to be a permanent sabbatical. Thank you for reading my blog, and please consider leaving a comment.
View all posts by Jon Waldron →
This entry was posted in Track, Uncategorized. Bookmark the permalink.