Tanzania – Part 12: The Rim of the Crater 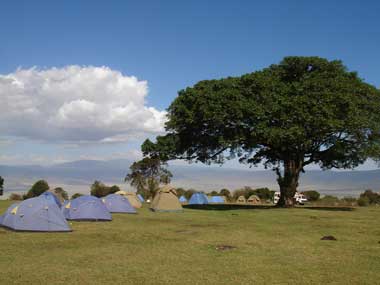 Simba campground on the rim of Ngorongoro Crater.

It was already three in the afternoon when we began the two-hour drive to the Ngorongoro highlands. Leaving Oldupai, the road was flat, and the terrain was dry and barren. But soon we began climbing, and as we gained altitude, the landscape became green and almost lush with low vegetation. As the land came back to life, we began to see numerous Maasai settlements in the hills. Rob explained that when the Serengeti National Park was created, it was designated a wildlife protected area and the nomadic Maasai were not allowed to maintain villages within its boundaries. Many had resettled in the Ngorongoro Conservation area, and dozens of large Maasai settlements were visible from the road as it continued to rise up into the highlands.

Although the afternoon sun was bright, it was getting colder. Early in the planning stages of our trip we had been told to bring warm clothes for the two nights we would spend camping on the rim of Ngorongoro Crater. Simba campground, overlooking Ngorongoro was nearly 2300 meters (7500 feet) above sea level, and temperatures at night typically fell to 5-10 degrees Celsius.

When we arrived at the campground, we were awestruck by the view of Ngorongoro Crater from above. Ngorongoro is an immense volcanic caldera measuring 22km across and 600 meters deep. It has been estimated that the mountain that erupted to create the crater was 5000-6000 meters tall and rivaled Kilimanjaro. Within the crater is a population of 25,000 large mammals, including what is thought to be the densest population of predators in Africa. It was overlooking this wonder that we now found ourselves, as we set up our tents on a large roughly circular expanse of grass, not far from an ancient tree that seemed to watch over the area. The effect was magical.

There were other things about this campsite that were different than what we had experienced so far. For one thing, we had an armed guard here patrolling the perimeter of the campground with what looked (to my untrained eyes) like an AK-47. Rob explained that the guard was necessary to protect against incursions of water buffalo and bush pigs. As we disembarked from the Land Cruiser, he also pointed out a young elephant hanging out in the sparse bush about 100 yards away from the camp. It seemed that this elephant was fairly well known to the guards, and hung around the campground where it could easily find water. I made a mental note that it would be a bad idea to meet either the elephant or a bush pig on a midnight trip to the bathroom.

I also noticed that the campground was ringed by a red dirt road and grass path that was perhaps 500 meters long. One could hardly imagine a more congenial arrangement for running high altitude intervals. Joni even suggested that we run, but I felt it was important to stick to my plan to break my streak so that it would no longer be the first and last thing I thought about every day.

As it grew dark, we played cards in the common dining building while Henry prepared another incredible dinner. Our meal was especially satisfying that night, since we were hungrier than usual after our improvised lunch. It was also very lively at the campground, with perhaps a hundred fellow campers from all over the world. I happened to be sitting next to a Japanese woman and a Tanzanian man who were conversing in basic Japanese. It was a perfect multi-lingual eavesdropping opportunity for me, as I knew a bit more Japanese than the man, and the woman spoke very slowly and explained everything twice.

Heading to our tents after dinner, the sky shone with stars, and the black outline of the single sheltering tree stood out against the deep blue of the heavens.

I fell asleep easily that night.

Sometime after midnight, I woke again to the sound of an animal snuffling up against the side of the tent. My heart froze. Was it a bush pig? Something worse? I lay there trying to be as quiet and uninteresting as possible, my mind racing with images of a big ugly brute rooting around our tent, ripping a hole in the canvas.

This went on for several minutes. I seem to remember the snuffling sound stopped for a while, then sounded again a little ways off. What was it seeking?

The next morning, I woke up before the sun. Peter was also up, and took some spectacular photos of sunrise over the crater. As for the midnight intruder, there was no sign of any damage to tent or camper. That might have been the end of the story, but it turned out that other members of my family had been up and had heard the animal. I know this because at breakfast Joni asked, “did you hear the Zebra last night?” Apparently my fierce bush pig had actually been a meek and harmless ruminant. 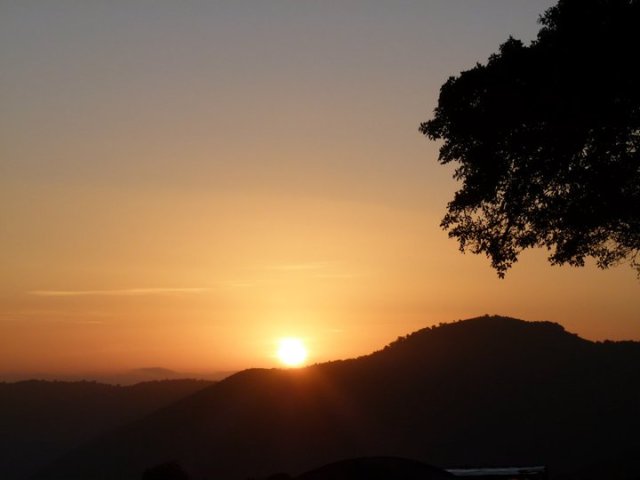 Running and Racing have been important parts of my life for as long as I can remember. I ran Track and Cross Country at Amherst HS, back in the day, and am proud to have been training and competing with the Cambridge Sports Union (CSU) for more than thirty years. If my bones hold out, I hope to continue for another thirty. Sixteen years ago, I began coaching, first as an Asst. Coach at Newton North HS in Newton, MA, and for the past ten years, as Head Track and Cross Country Coach at Concord Academy in Concord, Massachusetts. I've been writing about running for almost as long as I've been running, dating back to high school, when I would write meet summaries for the Amherst Record for about $0.33 per column inch. I've been blogging about running since 2005, and began blogging at "the runner eclectic" in 2014. Until recently I also had a day job, working full-time as a Technical Product Manager for Nuance Communications, based in Burlington, MA. But I am now on what might turn out to be a permanent sabbatical. Thank you for reading my blog, and please consider leaving a comment.
View all posts by Jon Waldron →
This entry was posted in Tanzania and tagged Ngorongoro, Simba Campground. Bookmark the permalink.