Last Friday, October 30th, was my son Loren’s 29th birthday. He was born just a few minutes before midnight, which meant that he just missed being born on Halloween. It’s true that by arriving on the 30th, he avoided having to share his birth anniversary with a major secular holiday dedicated to candy and costumes. But he did appropriate a day that had already had a special place in my memory. For it was three years earlier — October 30th, 1983 — that I ran my first marathon.

The Bostonfest Marathon was organized by John McGrath, the publisher of a relatively new magazine called Boston Running News (now New England Runner), and the idea was to stage a Fall Marathon entirely within the city of Boston. The hope was that Bostonfest would become an annual event, a local alternative to the increasingly popular big fall marathons in New York and Chicago, and the smaller, more local Ocean State Marathon. Although the race was highly competitive and successful, McGrath’s dream of a permanent fixture in the fall race calendar never materialized. There would be only one edition of Bostonfest, as traffic and logistical issues made staging another one prohibitively complex and expensive.

To stay within the city limits, the Bostonfest course was designed as two out-and-back sections. The race began at Boston Common, with the first five miles or so along Storrow Drive and Soldier’s Field Road Westbound and a U-Turn at the traffic intersection near the Eliot Bridge. Runners then headed back Eastbound all the way to Kenmore Square where they exited from Storrow Drive via the overpass over Commonwealth Avenue, and thence to the Fenway. The second out-and-back section followed the Fenway, Riverway, Jamaica Way, and ultimately the VFW Parkway all the way into West Roxbury before turning and heading back towards downtown. The return section wasn’t identical to the outbound section. The course cut back to Commonwealth Avenue via Brookline Street rather than following the Fenway, and the final mile was along Commonwealth Avenue, and then around the Public Garden to finish by the Common.

In those days, the qualifying time for the BAA Marathon was 2:50 for open men, so running under 2:50 was my only goal. But truly, I had no idea what I was doing. I had only been running seriously for a year or so, and although I had had some good results at shorter distances, the marathon was a complete mystery to me. I was fairly confident I could run for 26 miles — I had completed a 24-mile run a few weeks earlier, but racing it was another matter.

The day of the race was quite cold. I don’t remember what temperature it was at the start, but records for the day indicate that the average temperature for the morning hours was in the mid-40’s, so it was likely in the high 30’s when we lined up on Charles Street, a field of about 2000 strong.

The cool, dry conditions seemed to encourage a fast pace from the start. In those days, the depth of local race fields was remarkable, and the Bostonfest race was no exception. Almost from the gun, there was a sizable pack of runners running at Olympic Trials qualifying pace, while brothers Mark and Dean Kimball were off the front, building a lead that would grow to almost two minutes. As for me, I wasn’t thinking too much about splits, and was a little shocked and worried to be under 30 minutes at the 5-mile mark near the first turnaround on Soldier’s Field Road.

Ann, who was over six month’s pregnant with Joni, and my sister, Karen, were waiting for me on the overpass at around 9 miles, and would wait for me again at the finish. I remember them cheering me as I passed, and feeling really good and under control. The pace that had worried me at 5 miles now seemed quite comfortable, and I began to enjoy myself. I wasn’t really competing against anyone, and I still was thinking that my main goal was to finish in what I considered a merely OK time. I don’t remember doing any math in my head to calculate how much I could slow down and still run sub-2:50. Slowing down wasn’t really on my mind, just continuing to run these comfortable miles.

Meanwhile, at the front of the race, there was a classic drama emerging. Mark Kimball, in his first attempt at the marathon distance, went through the half-marathon in a reckless 1:06:16, having by this time dropped his brother and built a lead of almost two minutes on the rest of the field. While Kimball enjoyed his lead, Maine native and then Needham resident Andy Palmer had broken up the chase pack with a strong move after halfway (1:08:00). As the early flat miles gave way to rolling hills, Kimball began to slow. But because the course had so many broad, sweeping turns, it was hard for Kimball or the photographers on the press truck to judge whether Palmer was closing, and if so, at what rate. At this point, I want to quote the race recap from the January 1984 issue of Boston Running News:

“While waiting for the leader to emerge from the turnaround at the bottom of the course, the expected became reality. Instead of Dean Kimball in second place, it was a fast-closing Palmer. The next few miles, with those long, gradual rises, would determine the outcome. These not-so-subtle hills, occurring between miles 18 and 20, can have a devastating effect on a first-time marathoner.

And they did. For, beginning with mile 18 and continuing past 20, Mark Kimball continued to fall off the pace, running closer to six minutes per mile than five. The winding of the course around the innumerable curves hid the action that was taking place behind the faltering Kimball. Palmer couldn’t see his target, but he must have sensed he was close.

Alas, at 21.5 miles, it happened. Palmer passed Kimball in what looked like a baton exchange in a relay, Mark practically stopping on the spot, while Palmer strode confidently onward.”

Of course, I knew nothing of this, as I continued to run steadily and competently a couple of miles back. I found that the course suited me, and for the most part, I was able to maintain my pace. It was a little tough to climb the long hill by the Arboretum around 20-21 miles, but when I reached the top and could see the city skyline, I felt like I had a lot of running left in me.

In fact, being a novice, I didn’t realize how fickle that sense of well-being could be over the last few miles of such a long race. I had underestimated the need to drink fluids during the race and was pretty dehydrated. At about 24 miles, I went through a very rough patch, but after slowing down a bit, I managed to get through it, and continued making reasonably steady, if fragile, progress towards the finish at Boston Common.

One of the interesting footnotes to the race was that a team of researchers had undertaken to collect various pieces of physiological data from participants. For example, I had been weighed before the race and would be weighed afterwards. That’s how I know that I lost 7 pounds over those 26.2 miles, finishing at 136 That’s also how I know that it was a cold day. The medical report would note that 20% of the finishers who presented at the medical tent were treated for hypothermia.

As for me, I hung on to run 2:36:00, finishing just behind a kid from MIT named Jim Garcia and 42 seconds ahead of a brave Mark Kimball, who refused to drop out after crashing and burning at 21 miles. I have no memory of passing Kimball or of anything else about that last mile. Oddly, I was so brain-fogged at the end, that I remember the clock reading 2:35:26, and for days, I was convinced there must have been some sort of timing malfunction, and that I had been mistaken for someone else. I finally accepted the fact that it was my brain that was malfunctioning, rather than the clock. But whatever the time, it was a great result. in fact, it was enough to make me think that I was a marathoner, and would run much faster the next time I tried the distance and knew what I was doing. Alas, my next experience with the marathon would not be a pleasant one.

I finished 44th in that race. Imagine: 2:36:00 in a local marathon and 44th. In fact, I wouldn’t have been able to tell you my place without looking it up in the January 2004 issue of Boston Running News. It was hard not to be nostalgic. We were all so young, the race was young, the magazine was young.

No one remembers the Bostonfest Marathon anymore. I tried Googling it, and the results were paltry. The details are buried in old issues of magazines that probably should have been recycled years ago. These days, if anyone remembers marathons from the fall of 1983, they remember that great race between Rod Dixon and Geoff Smith that ended with Dixon exultant, arms to the sky, and Smith sprawled on the wet pavement in Central Park. Bostonfest remains a minor footnote.

But I remember Bostonfest. I was 25. I was a novice marathoner, one of many that day, but it had gone well, and the future seemed bright.

The next few months, with parenting, a new job, a move to a new town, seemed challenging but not frightening. Like the Bostonfest course with its innumerable curves, the immediate future presented a series of twists and turns, making it difficult to see my target clearly, or to sense what was coming up from behind. 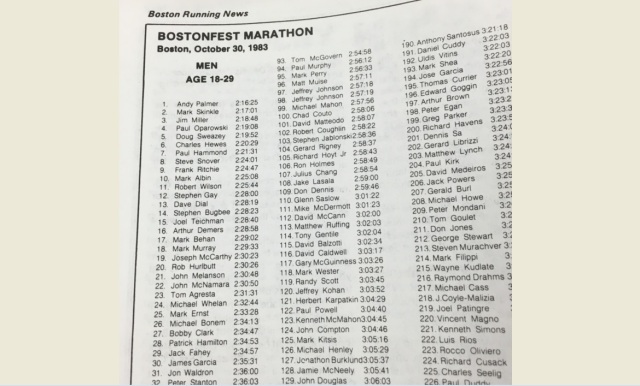 Running and Racing have been important parts of my life for as long as I can remember. I ran Track and Cross Country at Amherst HS, back in the day, and am proud to have been training and competing with the Cambridge Sports Union (CSU) for more than thirty years. If my bones hold out, I hope to continue for another thirty. Sixteen years ago, I began coaching, first as an Asst. Coach at Newton North HS in Newton, MA, and for the past ten years, as Head Track and Cross Country Coach at Concord Academy in Concord, Massachusetts. I've been writing about running for almost as long as I've been running, dating back to high school, when I would write meet summaries for the Amherst Record for about $0.33 per column inch. I've been blogging about running since 2005, and began blogging at "the runner eclectic" in 2014. Until recently I also had a day job, working full-time as a Technical Product Manager for Nuance Communications, based in Burlington, MA. But I am now on what might turn out to be a permanent sabbatical. Thank you for reading my blog, and please consider leaving a comment.
View all posts by Jon Waldron →
This entry was posted in Marathon, My Back Pages, Race Reports and tagged Boston Running News, Bostonfest. Bookmark the permalink.

42 Responses to The 1983 Bostonfest Marathon