For the Love of the Sport 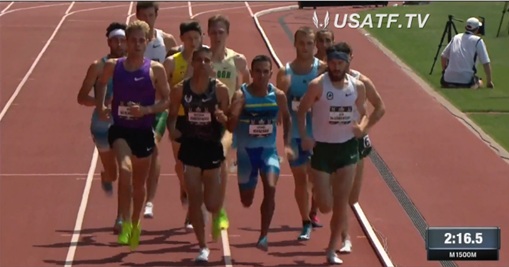 “2014 was kind of a statement win for you. You were unsponsored then, and that was pretty difficult. What has been the big motivational factor out here for you [this year]?”

“You know just the love of the sport… The crowds, the people, the fans. I mean they’re the ones who motivate me… I get messages that say, ‘thanks, you’re one of the smallest guys out there but you’re still kicking butt; you motivate me.’ Those are the messages […] that keep me going.” – Leo Manzano, who made his fourth World Championship team in the 1500 on Saturday.

In the course of four days, the 2015 U.S. Track and Field Championships seemed to transform itself from a merely entertaining circus to a surprisingly dramatic meet. While some races went true to form with favorites dominating the action, others served up stunning surprises and occasional heartbreak.

If there was a recurrent theme to the meet, it was that making the U.S. team is very hard, even for favorites and world leaders. Untimely falls, hurdle mishaps, lost shoes, tactical misjudgments, or just having a bad day humbled many of the biggest names at the meet. Among the surprising results:

On Saturday, Francena McCorory, the fastest woman in the world over 400m this year, was relegated to fourth behind Allyson Felix, Natasha Hastings, and Phyllis Francis. McCorory might still make it to Beijing if Felix decides to run only the 200m, but it was a humbling reminder that being best in the world means little compared to a bad day in the finals of the qualifying meet.

On Sunday, Ajee Wilson, odds-on favorite to win a very deep women’s 800m, lost a shoe during the race, and almost didn’t make the team. Maggie Vessey, another one of the favorites, fell on the second lap ending her chances. Alysia Montano, who in 2014 famously finished a half-minute behind everyone else while competing late into her pregnancy, somehow managed to get to the front and stay there, holding off Brenda Martinez to win her sixth US Championship.

In the men’s 800, Duane Solomon had promised to take the field into the twilight zone by running a world record pace through 600m. That strategy didn’t work out very well, as he ended up running out of gas with 100m to go and jogged/walked the homestretch. Meanwhile, Nick Symmonds, who had been content to go out in last place as Solomon strung out the field, moved up into fifth with 200 to go, and then had the most left at the end, coming from behind to win his sixth championship over Erik Sowinski and Cas Loxsom. For Symmonds, it was a great win after a less than impressive season so far, and puts him back in the discussion for a spot in the finals at Worlds.

In the men’s 5000, Galen Rupp almost missed the boat, finishing only third behind Ryan Hill and Ben True, while the ageless wonder Bernard Lagat had a rare bad day and finished only 10th. It was especially poignant to hear Lagat break down in tears in front of the cameras and realize that his long career as an open athlete might finally be nearing its end.

In other mishaps, Georgeanne Moline looked poised for s strong stretch run in the 400m hurdles when she hit the 8th hurdle and, like that, was out of contention. In the women’s steeplechase, Leah O’Connor slipped on the barrier heading into the final water jump and it cost her any chance at grabbing the third spot. In the men’s steeple, Stanley Kebenei was in a similar position with 250m to go challenging Dan Huling and Donn Cabral for a place on the team when he fell trying to clear a hurdle.

All of this makes Leo Manzano’s record of excellence that much more impressive. On Saturday, Manzano finished third in a dramatically close finish in the 1500m (video), his incredible tenth straight top-three finish at USATF Nationals.

At 5’5″, Manzano is often the smallest man on the track, and he always looks like he is running all out when others are just loping along. But over the past decade, he’s been strong when it counts, compiling a record of consistent excellence that has seen him make four World Championship teams and two U.S. Olympic teams. His ability to rise to the occasion also earned him an Olympic silver medal at the London Olympics in 2012.

It’s fitting to praise Manzano, as well as others like Lagat, Felix, Rupp (yes, Rupp), Montano, Symmonds, David Oliver, Shalane Flanagan, Amy Acuff (second in the HJ a month shy of her 40th birthday!), and others who have come back again and again over the past decade or more, sometimes winning easily, and sometimes struggling. As is always the case at these championships, new faces appeared at the top of the podium in many events, a reminder of how hard it is to stay on top with so much talent coming up from below.

Through all the fog of recent controversy, the love of the sport peeked out from behind the clouds in Eugene.

Running and Racing have been important parts of my life for as long as I can remember. I ran Track and Cross Country at Amherst HS, back in the day, and am proud to have been training and competing with the Cambridge Sports Union (CSU) for more than thirty years. If my bones hold out, I hope to continue for another thirty. Sixteen years ago, I began coaching, first as an Asst. Coach at Newton North HS in Newton, MA, and for the past ten years, as Head Track and Cross Country Coach at Concord Academy in Concord, Massachusetts. I've been writing about running for almost as long as I've been running, dating back to high school, when I would write meet summaries for the Amherst Record for about $0.33 per column inch. I've been blogging about running since 2005, and began blogging at "the runner eclectic" in 2014. Until recently I also had a day job, working full-time as a Technical Product Manager for Nuance Communications, based in Burlington, MA. But I am now on what might turn out to be a permanent sabbatical. Thank you for reading my blog, and please consider leaving a comment.
View all posts by Jon Waldron →
This entry was posted in Pro Runners and tagged Leo Manzano, USATF Championships. Bookmark the permalink.