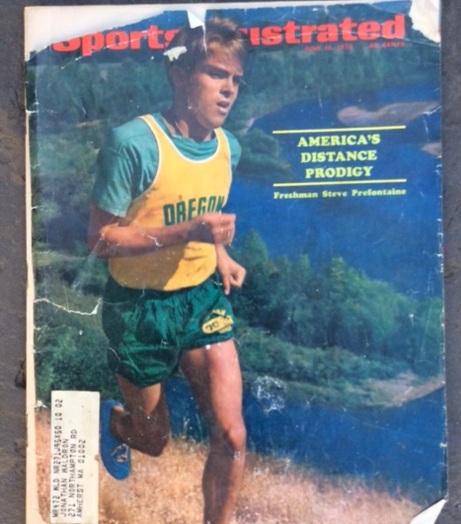 It’s been forty years to the day since Steve Prefontaine, America’s most charismatic distance runner, died in a car crash along Skyline Boulevard in Eugene, Oregon.

There have been and will be countless remembrances of Pre, including many thoughtful works on what he meant and still means to American Track and Field. There will be many who point to his showman’s flair for transforming distance races into rock concerts, or “works of art,” as he called them. Others will describe his brashness and self-confidence and his larger-than-life personality. Still others will talk about his willingness to hold nothing back, his relentless approach to races.

It has been 45 years since Sports Illustrated put the 19-year-old Oregon freshman on its cover, calling him “America’s Distance Prodigy.” Kids whose parents hadn’t been born when that cover appeared, today learn to revere Pre as someone who embodied a “pure guts” approach to racing. His willingness to put everything into races, to take the lead and push the pace from the early stages if need be, endeared him to his Oregon and U.S. fans. His untimely death at the peak of his athletic abilities robbed the world of a great athlete, but it also transformed the man into a myth. The books and movies that followed have only added to that mythic stature.

One thing that I think sometimes gets lost when people talk about Prefontaine and his gutsy running style, is just how good he was.

I was a twelve-year-old boy when I got that issue of SI, and I still remember the excitement that I experienced reading about Prefontaine’s times, and the confident predictions that he was on the road to becoming the best runner in the world. Of course, all the rest of it was cool, too: how he had started running as an under-sized freshman in Coos Bay; how he had made varsity, then become one of the best runners in the state, then the best high school runner in the country;  how he had chosen Oregon, after finally receiving a letter from the great Bill Bowerman.

But one reason for the article appearing that particular week was that the 19-year-old Prefontaine, who normally ran the 3-Mile, had just run a 3:57.4 mile to place third in an Oregon “intra-squad” meet featuring current and former U of O runners. (The article also reveals that he had recently improved his times in the 100y, 220y, and 440y to 10.7, 23.2, and 49, respectivley. The kid was fast!!)

One of the things that seems remarkable to me about Prefontaine is how he never seemed to regress, only get stronger. He won often, and among Americans, was virtually unbeatable at distances over a mile. Then there are the records. At the time of his death, Prefontaine held the American records for 2000m, 3000m, 2-Mile, 3-Mile, 5000m, 6-Mile, and 10,000m. His times don’t seem that impressive today, but they were fairly close to the world records back in 1974.

I don’t really remember how I took the news that he had died. I don’t remember how I heard about it, or when. What I do remember is the feeling that we would never get to see his full potential. It seemed so obvious that he was still improving, and would soon fulfill Bowerman’s prediction that he would some day be the best in the world.

I’ve kept the article all these years, and every so often I re-read it. The confidence is there, as well as a surprising sense of perspective:

“I don’t want to be like Jim Ryun. No doubt he’ll come back, and when he does he’ll again be the greatest, but I don’t want to go through what he did, all that tremendous pressure when he was so young. It came so quickly. World records at 19. I don’t want that. Later, yes. And when it comes, I’ll learn to live with it, but it won’t be my first love.”

Don’t you love that? When the world records came, he would learn to live with it.It’s too bad we never got to see those records.

Pre was gutsy, all right, and charismatic, and all the rest. But we wouldn’t be talking about him if hadn’t been so good.

Running and Racing have been important parts of my life for as long as I can remember. I ran Track and Cross Country at Amherst HS, back in the day, and am proud to have been training and competing with the Cambridge Sports Union (CSU) for more than thirty years. If my bones hold out, I hope to continue for another thirty. Sixteen years ago, I began coaching, first as an Asst. Coach at Newton North HS in Newton, MA, and for the past ten years, as Head Track and Cross Country Coach at Concord Academy in Concord, Massachusetts. I've been writing about running for almost as long as I've been running, dating back to high school, when I would write meet summaries for the Amherst Record for about $0.33 per column inch. I've been blogging about running since 2005, and began blogging at "the runner eclectic" in 2014. Until recently I also had a day job, working full-time as a Technical Product Manager for Nuance Communications, based in Burlington, MA. But I am now on what might turn out to be a permanent sabbatical. Thank you for reading my blog, and please consider leaving a comment.
View all posts by Jon Waldron →
This entry was posted in Pro Runners. Bookmark the permalink.