The Man Who Ran Fast 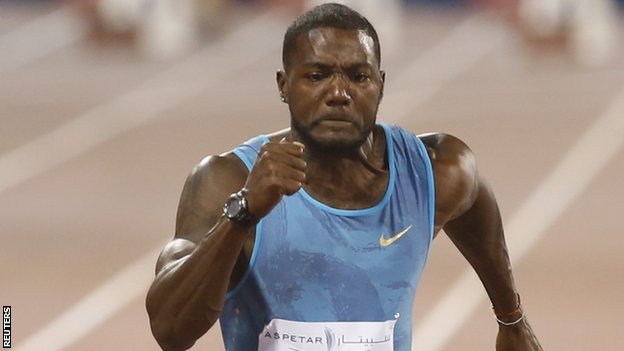 After spending the weekend in the company of high school athletes, I’ve had to take a couple of days to catch up with news from the professional track world. In particular, I’ve been reading various takes on the news that Justin Gatlin ran a world-leading time of 9.74 in the 100m at the Doha Diamond league meet. To put it mildly, that time is a problem.

The problematic aspect of the performance is covered in detail by Sean Ingle in The Guardian (Justin Gatlin gets faster with age but trust fails to keep pace), and in Ross Tucker’s Science of Sport blog (The Gatlin Dilemma). There’s not much I can add to what they’ve already written.

In brief, the problem is that Gatlin’s performance, a lifetime personal best at age 33, is an extreme outlier among world-class sprinters. It is extremely unusual for a sprinter to set PRs at that age. Because it is so unusual, the performance begs for an explanation, and the one that seems most plausible to many is that Gatlin is either doping now, or is still benefiting from doping done earlier in his career.

(Gatlin has twice been implicated for PEDs. The first time, he was banned for amphetamine use, but successfully fought the ban when he was able to show that his positive test was the result of taking prescribed medication to treat ADHD disorder. The second time, he was banned for four years, from 2006 to 2010, after testing positive for high levels of testosterone, the result, he claimed, of receiving a massage with a a testosterone-laced cream).

As Tucker points out, Gatlin has “three strikes” against him: he is a former doper, he competes in a historically doped event, and he is running faster than ever before at an age when almost every other sprinter is retired or in decline.

But what makes this so interesting is that there is almost no way for Gatlin to overcome the skepticism about his performances unless he runs more slowly. As long as he continues to run fast, he can’t dispel the suspicion that his fast times aren’t the result of illicit means. If he runs slower times, then people might find it easier to trust him.

In the mean time, Gatlin is going to face questions everywhere he goes, presumably leading up to the World Championships later this year. If he continues to excel, he’ll face even greater criticism. He’s like the boy who cried wolf, only we should call him the man who ran fast: he asked us to trust him when he ran fast back in 2004 when he won the gold medal in the 100m, but when he failed a second drug test, he lost that trust. Now he’s back to running faster than ever, but the track world doesn’t want to be fooled again.

It’s entirely plausible that later this summer he’ll win the gold medal in Beijing, but the wolves in the stadium and the media will eat him up anyway.