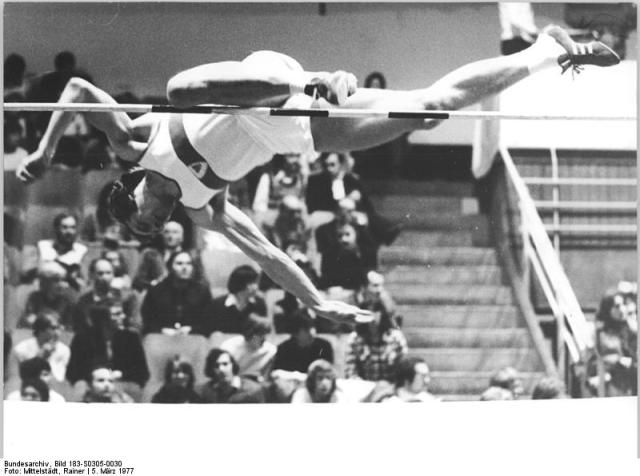 The older I get, the more I relish opportunities to tell stories about my illustrious high school high jump career, even though I suspect I’m becoming that old codger with too many miles on the legs and too many stale stories from back in the day.

“Did I ever tell you I was a high jumper in high school?”
“Yeah, and it was interesting the first two dozen times.”

But now that I’m coaching high school jumpers, there’s always a fresh supply of kids who have never even heard of the “Western Roll” and who think that human beings have always been clearing bars backwards. Yesterday, I had the chance to set them straight.

I had spent most of practice working with the high jumpers, and after all the drills and exercises, the run-throughs, the practice jumps, the taking and reviewing of video, things were finally winding down. One kid asked a benign question about why jumpers didn’t go head first over the bar, which led to a discussion of different techniques, and I mentioned that before there were massive foam rubber landing mats, jumpers used to straddle the bar. And then, even though I knew it was risky to ask my ancient muscles to remember how to do something I hadn’t done in many years, I couldn’t resist demonstrating. I jogged up to the practice bar – FROM THE WRONG SIDE — and smoothly cleared the height, which was probably around four feet.

That’s a total lie. My first attempt was ugly, and I hit the bar going up and coming down. But that one jump rebooted all my old memories, and my second attempt felt completely natural and I cleared the bar with ease. I mean, it was only four feet, but it was amazing to me that the muscle memory was still there. Anyway, after that jump I had a perfect opportunity to share my personal history with the high jump.

Actually, my illustrious jumping career began long before high school. Although I have no memory of becoming aware of high jumping as a sport, I suppose I must have seen it on TV during a segment of Wide World of Sports or in grainy black-and-white coverage of the Olympics. It looked like fun, and it wasn’t long before I had set up a primitive high jumping pit in my back yard using sawhorses for standards, a pipe for a crossbar, and bales of hay for a landing area. As I think about it now, it was an odd chance that we had bales of hay lying around. I have a vague recollection that those bales of hay were there because one summer our family had come close to boarding an actual horse in our backyard. We never did get a horse — I was very young and I don’t know what happened — but we did have fencing installed all around the edge of our property, and we acquired quite a few bales of hay. But I digress…

When I first started flinging myself over that makeshift bar into that rough and gradually rotting hay, there was no thought of going over the bar backwards. In 1968, Dick Fosbury began doing exactly that, and his success at the new technique would revolutionize the sport. But if I was even aware of the Fosbury Flop when I started my own backyard Olympics, my instincts for self-preservation prevented me experimenting with such an unorthodox and dangerous method.

By the time I was in high school, it had become obvious to me and my coaches that my talents lay in distance running, and my potential as a jumper was sadly limited. But in high school, there’s always room for someone who can pick up an occasional third place in a dual meet, so I was allowed to continue jumping. I would typically jump 5-2 or sometimes 5-4, but that was about it. I had no chance against good jumpers, but I would score against weak teams.

The other thing about high jumping in those days is that fiberglass bars were not common, and many schools used rigid aluminum bars instead. These were shaped with three sides, one of which lay flat on the standards. I remember it really hurt to land on a bar like that. I also remember that they had a tendency to become permanently bent so that they no longer represented a uniform height relative to the ground. This led to the high point (no pun intended) of my jumping career, a dual meet at a distance school that was using a bar deformed in such a way that it was several inches lower than the standards at precisely the point where I usually knocked the bar off. With this assistance, I managed to clear a height that was called 5-7, but was probably in reality no higher than 5-4. I have shamelessly claimed to be a 5-7 jumper ever since.

In my senior year, Perry Moss joined the track team. Perry was not a close friend, but we knew each other from basketball. I also played basketball as a kid, despite a profound lack of skill. Anyway, Perry was athletic is all the ways I was not, and had a great vertical leap. On the first day he tried high jumping he cleared 5-10, and in his first meet, he easily cleared 6 feet — all while flawlessly executing the new flop technique. I don’t remember how high he jumped that season, but he never really pursued track or took it very seriously. Later, he would become a very successful college basketball player, and even had a short stint in the NBA.

I haven’t thought about Perry Moss for years, but the moment he launched himself into the air, his lithe and powerful body tracing a majestic trajectory up and up and over the bar before dropping triumphantly to the soft cushions below, my illustrious career as a high jumper was over.

Running and Racing have been important parts of my life for as long as I can remember. I ran Track and Cross Country at Amherst HS, back in the day, and am proud to have been training and competing with the Cambridge Sports Union (CSU) for more than thirty years. If my bones hold out, I hope to continue for another thirty. Sixteen years ago, I began coaching, first as an Asst. Coach at Newton North HS in Newton, MA, and for the past ten years, as Head Track and Cross Country Coach at Concord Academy in Concord, Massachusetts. I've been writing about running for almost as long as I've been running, dating back to high school, when I would write meet summaries for the Amherst Record for about $0.33 per column inch. I've been blogging about running since 2005, and began blogging at "the runner eclectic" in 2014. Until recently I also had a day job, working full-time as a Technical Product Manager for Nuance Communications, based in Burlington, MA. But I am now on what might turn out to be a permanent sabbatical. Thank you for reading my blog, and please consider leaving a comment.
View all posts by Jon Waldron →
This entry was posted in My Back Pages and tagged high jump, perry moss, straddle technique, western roll. Bookmark the permalink.