It’s Not (Always) About the Workouts 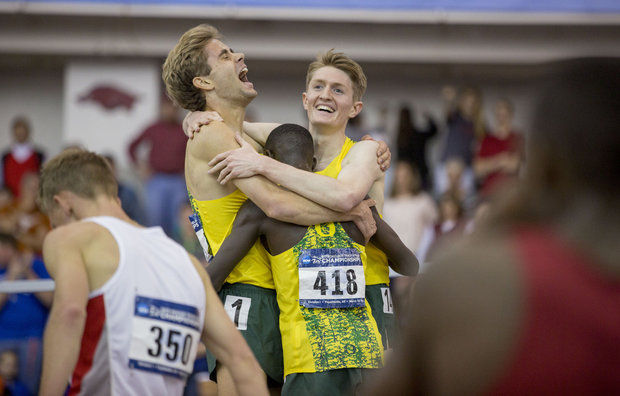 As reported by Ken Goe in The Oregonian, Salazar called the performance of Powell’s runners at last month’s NCAA Indoor championships “unprecedented” and said he wants to see what they’re doing for workouts. Oregon’s Erik Jenkins won the 3,000 and 5,000 meters, Edward Cheserek won the mile and was second in the 3,000, while anchoring Oregon’s winning distance medley team. Oregon had three runners score in the mile, swept the top three places in the 3000, and went 1-3-7 in the 5,000. “I’ve never seen anything like that indoors,” Salazar said. “They were on fire. You want to talk batting averages? Andy Powell is batting a thousand.”

No I don’t want to talk batting averages. And even if I did, what does that even mean, “he’s batting a thousand?” A batting average of a thousand would imply perfection, and three runners going 1-3-7 is very impressive, but it’s not perfection. What would you say if they went 1-3-6, or 1-2-5 — that he was batting twelve hundred? If anything, it would probably make more sense to talk about slugging percentage (winning is like a home run, second is like a triple. etc., or even on-base percentage (making it to the finals). But why the hell are we talking about baseball? This is track and field, dammit.

OK, now that I’ve gotten that out of my system, the above news item caught my attention because it was both familiar and refreshing to hear that even a coach of Salazar’s stature wanted to peek into the training logs of the Oregon distance runners to see what the heck they’re doing to achieve such dominance at the NCAA level. The history of distance running offers countless examples of athletes and coaches getting good results, and the rest of the world beating a path to their door to learn and apply the training innovations thought to be responsible. One thinks of Nurmi and his precise interval workouts, Zatopek and his insanely massive sets of 400s and 200s, Lydiard and his emphasis on extensive base training, and on and on. A few years ago I had never heard of “special blocks,” now it seems that everyone has heard of them and even non-elites are incorporating them into their training.

I associate special blocks, which involve a high volume of fast running in two or more sessions in a single training day, with Italian coach Renato Canova. I’ll be the first one to admit I don’t fully understand the theory, and when I see the details of the workouts, I can’t distinguish the essential elements from the arbitrary flourishes. Moreover, I don’t think I’m alone in having a surface-level familiarity with these workouts, but little practical and general understanding about how to incorporate them into a training plan. I would not trust myself to write out a special block workout. I’d just be copying from someone’s training log.

So let’s imagine that Salazar gets his wish and he sits down with Andy Powell to peruse the training logs of Cheserek, Jenkins, Geoghegan, Gregorek, and the rest of the Oregon distance crew. He notices that every Wednesday, the team does a morning tempo run, an afternoon interval session followed by a short session of Olympic lifts, and then goes out for a team dinner at Beppe & Gianni’s Italian Trattoria on E. 19th Ave. What part of that day is responsible for the Ducks taking the top three places in the 3000m at NCAA D1’s last month?

Well of course, you can’t look at one day in isolation, right? You look at the larger context, the progression of mileage, strength, intensity, and race-specific work over time, and you start noticing that Cheserek does so many miles, but Gregorek does less, and Geoghegan does the most of anyone. (I have no idea, I’m just imagining looking at all those training logs and trying to find a pattern.) Maybe Jenkins has permission to sleep in on Sunday mornings and do his regeneration run later in the day. Is that relevant?

It would be foolish of me to deny that training innovation is real. Whether inspired by intuition or scientific experiment, coaches and athletes do occasionally discover better ways to train. I have a feeling that most such innovations are, essentially, discoveries about training load and recovery — in other words, how long and how hard an athlete can train over some time period without breaking down and with enough time for physiological adaptation to take place.

But at the same time, every athlete is different, and I can’t imagine taking one athlete’s workout and blindly giving it to another athlete without significant alterations to take into account the individual factors that determine that fine line between too much and just enough. Returning to Canova, there’s no doubt that we’re all trying to look at the workouts he gives his athletes to discover the secret ingredient, the training innovation that will turn also-rans into world-beaters.

But before we do that, we might want to ponder what Canova himself wrote about his “system,” commenting on the training of Arne Gabius, who ran 2:09:32 at last fall’s Frankfurt marathon to become the first German to run sub-2:10 in 24 years (I’ve preserved Canova’s own capitalization):

“When I read the interpretation of my training philosophy, analyzing the programmes my athlete REALLY carried out, I smile. The most important point of my training philosophy is the INDIVIDUALIZATION. I never prepare training plans longer than 2 weeks. This because a coach is like a tailor who has to make a good cloth, and for doing this the first step is to MEASURE the client, analyzing his body. Following this idea, the first step is TO ANALYZE THE ATHLETE : his morphology, his specific attitude, his career, his mentality, his motivation, his running technique, his previous adaptation. Only after this first step I provide for making a plan OF TWO WEEKS, because every plan has to produce some variation in the body and in the mind of the athlete, AND I HAVE TO BUILD THE NEXT PLAN STARTING FROM THE REAL SITUATION at the moment.

So I say, good luck to Salazar and everyone else who looks at Oregon’s training logs for new tricks. As John L. Parker famously put it, everyone wants to know The Secret. That’s fine, but maybe the training logs aren’t the best place to look.

Running and Racing have been important parts of my life for as long as I can remember. I ran Track and Cross Country at Amherst HS, back in the day, and am proud to have been training and competing with the Cambridge Sports Union (CSU) for more than thirty years. If my bones hold out, I hope to continue for another thirty. Sixteen years ago, I began coaching, first as an Asst. Coach at Newton North HS in Newton, MA, and for the past ten years, as Head Track and Cross Country Coach at Concord Academy in Concord, Massachusetts. I've been writing about running for almost as long as I've been running, dating back to high school, when I would write meet summaries for the Amherst Record for about $0.33 per column inch. I've been blogging about running since 2005, and began blogging at "the runner eclectic" in 2014. Until recently I also had a day job, working full-time as a Technical Product Manager for Nuance Communications, based in Burlington, MA. But I am now on what might turn out to be a permanent sabbatical. Thank you for reading my blog, and please consider leaving a comment.
View all posts by Jon Waldron →
This entry was posted in Training and tagged Andy Powell. Bookmark the permalink.

3 Responses to It’s Not (Always) About the Workouts