Chillin’ with the Jets 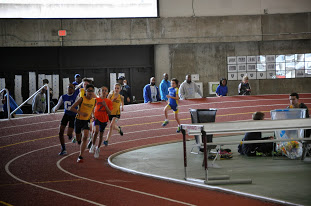 In the rhythm of the training week, Thursday nights have always been reserved for something a little harder than a regular run. In late spring and summer, it might be a tempo run at Fresh Pond; in the Fall, it might be hills, and in the winter, Thursday nights will usually find us careening around an indoor track for our main workout of the week. But in early spring, when our winter program of workouts at BU has ended and the weather is iffy, you never know exactly what to expect from Thursdays.

The last couple of weeks, a few of us have tried to fill the by heading over to Harvard’s Gordon Track.

The main attraction and the main challenge of a Thursday night at Harvard is sharing the space with the Jets. I’m talking, of course, about the Cambridge Jets, a youth club that practices at Harvard on Mondays and Thursdays throughout much of the year. I have to say, the Jets are an impressive group. On any given night, fifty or more kids will show up, some as young as six or seven. There are several coaches, and during the course of their practice, the mob breaks into smaller groups for warm ups, drills, and eventually intervals on the track.

Fifty kids of all ages and multiple groups can be a circus, and it’s good practice to finish one’s workout before the Jets really get going on the track. However, that rarely happens, and there’s almost always some overlap. So what you have is a small group of big people running long, steady intervals, and many groups of really fast kids running short, burst-y intervals. The interactions can be hilarious.

For one thing, the kids have a primitive sense of track etiquette. Or, to put it in simpler terms, the kids aren’t really aware that there’s anyone else using the track. This is understandable, and would be adorable except that sometimes it leads to near collisions and awkward interactions. Some examples:

For all the bedlam, being in the same facility with the Jets has its pleasures, too. There’s something very cool about seeing all these kids who love to run and who’ve already developed legit runner strides, beautiful long strides on spindly young legs. It’s also pretty awesome to see six- and seven- year olds in speed suits and wrap-around shades, miniature Usain Bolts, with all the swagger ready for the world to see.

There’s also something very pure about the way these kids run. You can’t help feeling and sharing their joy in movement.  At the beginning of every repeat, they off at a gallop, and if they get tired, they just slow down for a bit, until they feel like picking it up again. A few wear serious expressions, but as rule, most of them look like they’re having a good time. And within a few moments of finishing a lap, they’re laughing again, just hanging out, just chillin’ with their friends.

At some point, their coach tells them to do something else, and they do that, too. I suspect that, unlike us, they aren’t troubled about laps they have not yet run. Without trying, they inhabit the moment and trust that the future will take care of itself.

What could be better than this? Running that’s simple, uncomplicated, and fun.

Running and Racing have been important parts of my life for as long as I can remember. I ran Track and Cross Country at Amherst HS, back in the day, and am proud to have been training and competing with the Cambridge Sports Union (CSU) for more than thirty years. If my bones hold out, I hope to continue for another thirty. Sixteen years ago, I began coaching, first as an Asst. Coach at Newton North HS in Newton, MA, and for the past ten years, as Head Track and Cross Country Coach at Concord Academy in Concord, Massachusetts. I've been writing about running for almost as long as I've been running, dating back to high school, when I would write meet summaries for the Amherst Record for about $0.33 per column inch. I've been blogging about running since 2005, and began blogging at "the runner eclectic" in 2014. Until recently I also had a day job, working full-time as a Technical Product Manager for Nuance Communications, based in Burlington, MA. But I am now on what might turn out to be a permanent sabbatical. Thank you for reading my blog, and please consider leaving a comment.
View all posts by Jon Waldron →
This entry was posted in Uncategorized and tagged Cambridge Jets. Bookmark the permalink.

1 Response to Chillin’ with the Jets