(One of the more unexpected results from Sunday’s action at the 2015 USATF Indoor Championships was Lauren Wallace’s victory in the 1000m. Entering the race, several runners, including Treniere Moser, Stephanie Charnigo, Charlene Lipsey, and Stephanie Brown, seemed to have better chances to win, based on their previous  performances this season. And yet Wallace, one of the less favored runners in the race, surprised them all. How did that happen? I decided to look carefully at how the race unfolded, and the more I looked, the more interesting the sequence of events that led to the surprising conclusion. You can watch the entire race here.)

Nine women lined up for the women’s 1000m final. At the common start, Elizabeth Staker, Stephanie Brown, Geena Lara, Treniere Moser, Emily Lipari, and high school senior Alexa Efraimson lined up in that order from the inside lane out. In the barrel, were Lauren Wallace, Stephanie Charnigo, and Charlene Lipsey.

At the gun, Brown, Lara, and Lipari all got off the line fast. Staker, on the rail, was a half step behind Brown but just close enough to keep Brown from cutting in. With Brown on the outside of Lane 1, Lara in Lane 2, and Lipari dropping down to the outside of Lane 2, Moser was completely blocked. Efraimson, on the outside, went out aggressively, but had to run the entire first curve in Lane 3. Meanwhile out in the barrel, Wallace had gotten off to an excellent start and had the inside of Lane 4. Charnigo and Lipsey maintained their positions outside of Wallace as they all came around the first turn. 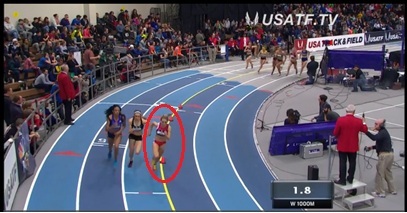 Down the backstretch of the first lap, Brown finally took the rail from Staker, with Lara on Brown’s outside shoulder and Efraimson and Moser settling in third and fourth. In the barrel, Lipsey accelerated to pass Wallace, and Charnigo covered the move, staying on Lipsey’s right shoulder. At this point, coming around the far turn, Wallace was no better than sixth, and was within seconds of being swallowed up by the merging of the pack. As the runners came out of the second turn and into the home straight for the first time, Brown looked to be in ideal position to control the front. In the barrel, Lipsey drifted wide, displaying a tendency that would have dramatic consequences later in the race. As she approached the break line, she swung slightly to the outside, creating a brief opening along the inside of Lane 4.

As the pack settled into a more steady pace with everyone prepared to hold their positions, Wallace made a surprising and unusual move. Taking advantage of the momentary daylight that Lipsey had given her, she passed the break line and immediately slid left to avoid Lipsey, who was now starting to cut in, and then right to stay clear of Lara in Lane 2. This serpentine move allowed her a clear path to the front. With a short burst of speed, she reclaimed the lead from a mildly surprised Brown.

While this move didn’t win her the race, it was the move that made the win possible. 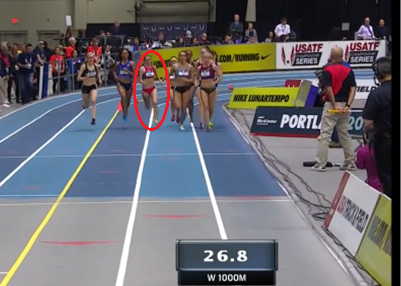 After one lap, Wallace looked like a sacrificial lamb leading the pack of more credentialed runners, although she had managed to execute her pre-race strategy of putting herself in position to avoid running in the second or third lanes and making costly surges.

Around the first turn of the second lap, Wallace led with Brown on her shoulder and Efraimson and Moser in her wake. Lara, Charnigo, and Lipsey were on the outside, running in Lane 2. Charnigo, in particular, seemed unable to decide whether to surge to the front or tuck in, opting to continue running extra distance to keep her options open.  Around the second turn, the pack bunched up slightly, and Lipsey, who had been on Moser’s shoulder, moved wide. Coming out of the turn and approaching the 400m mark, it was still Wallace in front, with Brown on her shoulder, Charnigo on Brown’s shoulder, Lipsey on Charnogo’s shoulder, and Efraimson on the rail directly behind Wallace. Moser, who had earlier been boxed in by Lipsey, now found herself boxed in by Lara, and rather than stay there, she let herself drift backwards, as first Lara, and then Staker pulled ahead.

Around the first turn and into the backstretch, Wallace continued to lead Brown, with Charnigo on Brown’s shoulder in Lane 2 and Efraimson right behind. Lipsey had fallen back slightly, and Moser, finally tiring of her position, pulled out from behind Lara and Staker and made a strong move to close the gap to the leaders. Into the far turn, and Moser went wide to pull ahead of Lipsey.

Approaching 600 meters, the entire pack bunched up, with Wallace, Brown, Charnigo, and Moser running almost four abreast. As the pace slowed, the congestion increased, and only eight-tenths of a second separated first from last.

Efraimson was the first to move, attempting to extricate herself from the inside lane as the pack began the fourth lap. Efraimson made brief incidental contact with Straker, who momentarily lost her balance and broke her stride. Around the first turn, all the pent-up tension found its release in a flurry of moves. Charnigo finally decided to take the lead and passed Brown and Wallace. However, at the same time Efraimson hit the accelerator hard and passed Charnigo. Meanwhile, Lipsey was also surging on the far outside, and passed Efraimson. Moser followed these moves, and coming out of the far turn positioned herself on Efraimson’s shoulder. Brown had been slow to react, but now pulled up on Charnigo’s shoulder. Wallace, who had never budged from the inside lane, was now in sixth, with five very fast women pulling away from her.

With Lipsey leading and characteristically shading the outside of Lane 1, Charnigo made her final bid for the lead, trying to get around Lipsey. She never made it. Entering the back straight, Brown moved out to Lane 3 and kicked hard. Efraimson also started kicking from Lane 2, and clipped Charnigo’s heel. Charnigo briefly broke her stride, and her race was essentially over. Moser found herself on the rail, and once more boxed, this time by Lipsey. Wallace was behind Moser, still in sixth with a little over 100m to go. 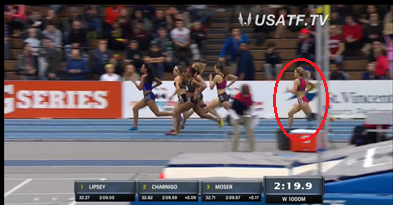 As they came around the final turn, it seemed that four women had a chance. Lipsey had the lead and was running in the outside of Lane 1. Brown was on her outside, and had just about pulled even. Moser was behind Lipsey and slightly to her right, but behind Brown. Efraimson was almost directly behind Moser. With everyone thinking they needed to get around Lipsey to the right, the inside of Lane 1 was open. Wallace, who had never left the rail, was bearing down on this opening.

With 40m to go, Brown — kicking all out — overook Lipsey. With no clear path to the finish, Moser took an almost-sideways step to the right to get to the outside of Brown. The momentary deceleration would prove costly, but perhaps she had no choice. Wallace, with an absolutely clear path to the finish, had the best acceleration, and although Moser closed well, Wallace hit the line first, 0.20 ahead of Moser and Brown, with Lipsey in 4th, Efraimson in 5th, and Charnigo a well-beaten 6th.

I watched the race many times, and tried to estimate the amount of distance run by each of the top six women. On a 200m indoor track like Reggie, the extra distance from running a curve in the next lane over is approximately 2.5m. In other words, running in Lane 2 for a full lap, a runner will cover ~205 meters. By counting the number of times each runner navigated a turn in Lane 2 or 3, I tried to get a rough estimate of the total distance covered. The following table shows the final time, total distance covered, and average speed for the first six finishers:

Someone might point out that I’m not taking into account the benefit of drafting (for the runners behind Wallace). This is a fair point, but for various reasons I think drafting had little impact on the results. For the most part, trailing runners were not running directly behind Wallace or each other. The race played out with a lot of lateral movement throughout.

For the race is not always to the swift.

Running and Racing have been important parts of my life for as long as I can remember. I ran Track and Cross Country at Amherst HS, back in the day, and am proud to have been training and competing with the Cambridge Sports Union (CSU) for more than thirty years. If my bones hold out, I hope to continue for another thirty. Sixteen years ago, I began coaching, first as an Asst. Coach at Newton North HS in Newton, MA, and for the past ten years, as Head Track and Cross Country Coach at Concord Academy in Concord, Massachusetts. I've been writing about running for almost as long as I've been running, dating back to high school, when I would write meet summaries for the Amherst Record for about $0.33 per column inch. I've been blogging about running since 2005, and began blogging at "the runner eclectic" in 2014. Until recently I also had a day job, working full-time as a Technical Product Manager for Nuance Communications, based in Burlington, MA. But I am now on what might turn out to be a permanent sabbatical. Thank you for reading my blog, and please consider leaving a comment.
View all posts by Jon Waldron →
This entry was posted in Indoor Track, Pro Runners and tagged 1000m, Lauren Wallace, USATF Indoor Championship. Bookmark the permalink.