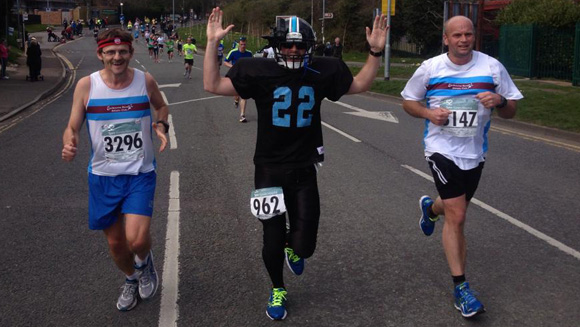 It was past midnight but I was having a hard time getting to sleep. Although I was plenty tired from a long day capped off by a demanding evening track workout, neither my mind nor my body had calmed down in the hours since. I still felt dehydrated even after several tall glasses of water. And to top it all off, my efforts to decompress by reading the sports pages had only served to make me more anxious about the upcoming Super Bowl. Now, tossing and turning in my bed, my thoughts ricocheted from one topic to another, from interval workouts to football air pressure, from the guy who shoveled the snow from the Marathon finish line on Boylston Street to Marshawn Lynch and refusing to answer questions at the Super Bowl media day in Arizona. Running and Football. The topics began to twist together in my brain as I drifted off into an uneasy sleep…

I was in a bar, and all the TVs were showing the same scene — a crowd of runners massed in Hopkinton, nervously hopping up and down or shaking out their legs. A motley of singlets represented a variety of national colors and corporate sponsors.

Then the picture changed. Loud theme music blasted out of the speakers as a computer-generated image of a laurel wreath appeared on the screen, changed colors, and finally morphed into a corporate logo that exploded as the music reached its climax. The animation dissolved, revealing two men in expensive suits facing the camera. In a well-practiced baritone, the man on the left looked into the camera and began…

From its humble beginnings in 1897 the Marathon has grown to be one of the premiere sporting events in the world. Win here, and your place in history is secure. But here, the winning doesn’t come easily. Olympic gold medalists have fallen by the wayside, and world record holders have faltered. Unlikely heroes have emerged. Will a favorite take the laurel wrath this year, or will it be an unknown, bursting from poverty and obscurity to claim one of the most coveted titles in the world?

The Kenyans are here, hoping to add to their legacy. The Ethiopians are here, determined to reclaim a prize they believe should be theirs. The Americans are here, trying to replicate the magic from 2014. South Africans, Japanese, Russians, and runners from 135 countries are all here, ready to rumble on running’s biggest stage, ready to do combat over twenty-six miles and three hundred and eighty-five yards of the most hallowed stretch of pavement on the planet. The trash-talking is over, now it’s time to say ‘may the fastest man and fastest woman win.’ This is it. This is…. The Boston Marathon!

Hi everyone, welcome to Hopkinton where we’re here for the 114th running of one of the world’s most revered races. I’m your host, Trent Blowhard, and I’m joined in the booth by my partner Hal Moneysworth. It’s a beautiful April day here in New England, as we wait for the starting gun that will send 30,000 human Ferraris on their way as they attempt to write their own hero story on the historic road to Boston.”

And they’re off! The starting gun has been fired, and the crowd of runners is surging forward. Let’s go to our side-of-the-road reporter, Adele Spritzer, who is on the course to give an update.

Thanks, Trent. I just talked with Meb Keflezhigi’s coach, Bob Larson, who says that Meb’s strategy today is to run with the lead pack early, but if the race becomes too tactical, Meb’s prepared to get out front and keep the pace honest. That could be key as the Kenyan runners have been saying all week that they feel the real racing doesn’t start until the hills.

Thanks for the insight, Adele. And as you can see from the graphic we’re showing on the screen, Meb has never lost a Monday marathon where he had a lead of more than ten seconds halfway into the race. Will that factor into his strategy today, Hal?

Trent, the lead pack just ran the first 400 meters in 71.6 seconds, and that’s very slow for this downhill start. You’ll notice that we’re employing our “virtual pacer” technology to show viewers at home exactly how far ahead or behind course record and world record pace the leaders are. As you can see, there is already a substantial gap of 5.7 seconds from the front of the pack to the virtual course record pace. As for Meb, he’s up there in the lead pack, but has decided not to push the pace for now.

Hal, do you think the slight headwind has anything to do with the slow early pace?

No doubt, Trent. Our mobile weather station is reporting a wind from the Southeast at just over 10 miles per hour and none of the top runners wants to get out in front and take the brunt of that wind. Look for the pace to dawdle through the early miles, as the runners jockey for position in the safety of the pack.

Thanks, Hal, and as you can see from this graphic, Kenyans have won 92% of marathons held in April when headwinds have averaged greater than 8 MPH, compared with only 90% when the race had a tailwind.

Now let’s check in with head of the Massachusetts Highway Commission, Rolf DeWalt, who has an update on the condition of the roads through the eight towns and cities traversed by the marathon route.

The roads are in great shape Trent. Highway crews have been working around the clock to remove any debris from the roads, and to spray the surface with a compound that improves traction and makes it less likely that the speedier runners will slip.

Rolf, is that an advantage for the East African runners?

Well, after last month’s controversy with the local New England Runners scuffing up the pavement with sandpaper to improve their grip, I think officials wanted to “even the playing field,” you might say. So, if anything, this should erase any disadvantage the East Africans might have had from being lighter.

Ok, Rolf, keep up the good work. We’re just seeing the lead pack pass the mile in 5:03.4, and yes, there’s the lead women’s pack passing the mile in 5:21.7. The women seem to be taking the race out much harder than the men, right Hal?

For sure, Trent. The men are jogging, but the women are hammering, and that first mile split proves it.

There you have it, folks. A tactical race developing among the men. As this graphic shows, in the past twenty-three years, only one runner from a country with an “R” in its name has won a race when running negative splits. Will Meb write a new chapter in that history? We’ll find out in a moment when we return after a word from our sponsor…

Running and Racing have been important parts of my life for as long as I can remember. I ran Track and Cross Country at Amherst HS, back in the day, and am proud to have been training and competing with the Cambridge Sports Union (CSU) for more than thirty years. If my bones hold out, I hope to continue for another thirty. Sixteen years ago, I began coaching, first as an Asst. Coach at Newton North HS in Newton, MA, and for the past ten years, as Head Track and Cross Country Coach at Concord Academy in Concord, Massachusetts. I've been writing about running for almost as long as I've been running, dating back to high school, when I would write meet summaries for the Amherst Record for about $0.33 per column inch. I've been blogging about running since 2005, and began blogging at "the runner eclectic" in 2014. Until recently I also had a day job, working full-time as a Technical Product Manager for Nuance Communications, based in Burlington, MA. But I am now on what might turn out to be a permanent sabbatical. Thank you for reading my blog, and please consider leaving a comment.
View all posts by Jon Waldron →
This entry was posted in Attempts at Humor, Marathon and tagged BAA Marathon, Football. Bookmark the permalink.