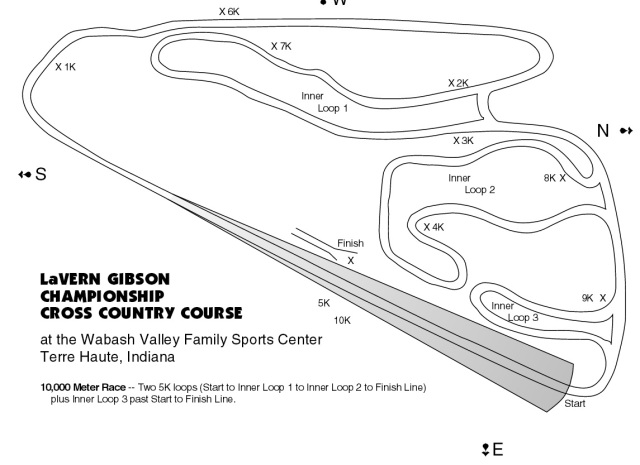 In the midst of a busy Saturday, I was lucky and grateful to find an hour in the middle of the day to watch the live stream of the NCAA Div I Cross Country Championships, held at the Lavern Gibson Cross country course in Terre Haute, Indiana.

Almost a decade ago — back when Joni was still attending school in Indiana — the two of us made a plan for me to visit her at school and then together drive the three hours from Richmond (Indiana) to Terre Haute to watch the NCAA championships in person. It was a really fun experience, and I’ve enjoyed reliving it over the years by watching the TV or Web coverage.

Although it might be hard to tell on video, the course is a treasure — a green sanctuary in the midst of the undulating Indiana countryside, and home to a twisting corridor of sturdy green turf that is wide enough for hundreds of collegiate runners to pass, yet intimate enough to allow spectators to stand a few feet away from the stampede. The start is extraordinary, stretching almost 1000 meters in a straight line, past the finish and down a slight hill, before making a sweeping right hand turn onto the back loop. Spectators who are reasonably fit can dash across the starting straight to the 2k mark, and back and forth to see the leaders at 3k, 4k, and 5k. It’s an amazing sight to see the hundreds, if not thousands, of extremely fit spectators racing for viewing positions as the race progresses.

The 2014 Championships went very much according to form. On the women’s side, the pre-race favorite – Kate Avery of Iona — won the women’s race using the simple expedient of going out hard and not slowing down. She had the lead from just past 2k and looked completely in control over the latter half of the race, with her winning margin of eight seconds seeming to be much more than that. In the team battle, heavily favored Michigan State took care of business, winning the team title with 85 points, far ahead of Iowa State’s 147 points. The final podium spot was decided by a single point, as New Mexico edged Georgetown 188-189. That result made me wish for the type of technology and coverage that would allow us to follow what was happening in real-time. In fact, it wasn’t until the morning when I bothered to look at the 4k splits that I realized that the New Mexico women were 78 points behind Georgetown at 4k of the 6k race. That leads me to believe that if the race had been only a few meters shorter, the Hoyas would have been hoisting the 3rd-place trophy instead of the Lobos.

On the men’s side, too, the favorites were triumphant. In a race that went out cautiously, Edward Cheserek sat in the pack for the first 8k before dropping the hammer on everyone else with a 5:40 last 2k. Meanwhile, the Colorado men, the consensus favorites, pulled away from Stanford in the that final, frantic 2k to win their second straight championship. 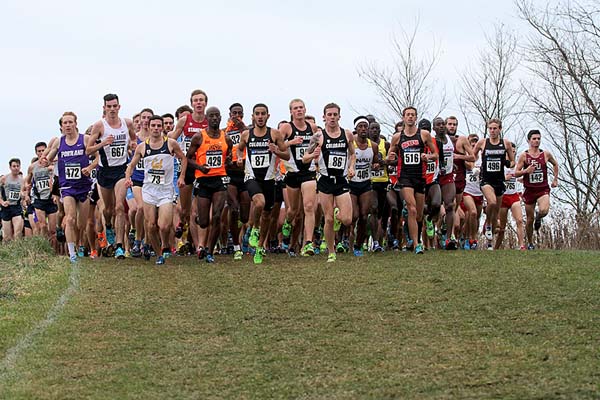 As in the women’s race, third place was a minor upset, with Portland outrunning much more heavily hyped teams from Northern Arizona, Syracuse, and Oregon. The nature of the team competition was well-illustrated by Oregon, with the 1st and 2nd overall finishers in Cheserek and Eric Jenkins, but a score that grew as their fourth and firth runners fell back into the middle of the pack.
The broadcast, with running legend Bob Kennedy the color commentator, was not bad, all things considered, although my expectations started pretty low. It would still be nice if the play-by-play announcer was able to recognize the top runners, but no matter. The course, the race, and the sport itself made that hour in the middle of a busy weekend day well worth the time.