A Little Rain (to Brighten Your Day) 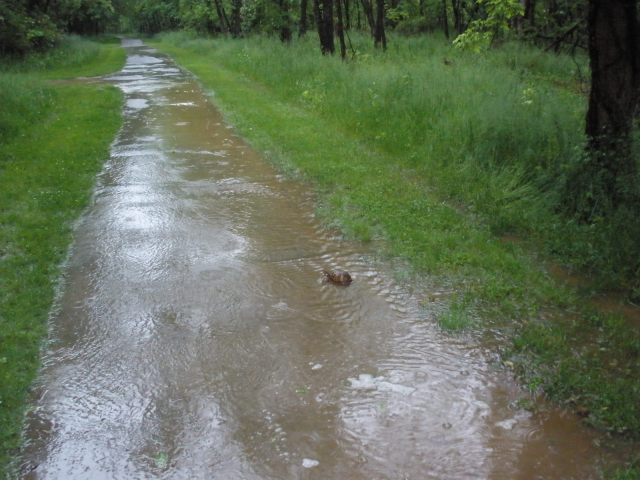 According to the Boston Globe, nearly four inches of rain fell in Boston over the past couple of days, as a typical Nor’easter brought strong winds and heavy precipitation to the area. Wednesday night was particularly delightful, as thunderstorms brought howling winds, flashes of lightning, and driving rain through the Western suburbs. It was great, if you were snug inside with nowhere to go and the storm windows down.

Rain such as we had the last few days can be an interesting lens through which to view the dynamics of a group of runners, for example, a high school cross country team.

Now, I can hear some of you groaning already. “Not another post about high school runners!” But bear with me. This is not really about high school; it’s about tribal identity, about knowing who will be out there with you when the weather drives everyone else indoors, and what that says about you.

So, if we take a group of high school runners as an example, the first thing that happens when the team encounters weather is a free-for-all of reactions and comments that help establish normative behaviors. Some kids, naturally, follow their first instinct, which is to huddle for shelter. Others ask naive questions about whether practice has been cancelled, and become the objects of gentle derision. Some are eager to display bravado as the rain pelts down. Some genuinely and sincerely voice the opinion that this is their favorite kind of weather. Through this discussion, an approximate consensus is reached that we will, in fact, be running today.

That being established, the next issue is what we’ll be doing. Here’s where rain is actually a blessing in disguise. The hardest thing about coaching a large group of runners with a wide variety of backgrounds and motivations is transforming the essential tedium of training into something interesting. Let’s face it, most training is pretty boring. But throw a Nor’easter into the mix and that tired old six-mile loop suddenly becomes an epic journey that they’ll remember long after they’ve forgotten everything else they learned in high school.

Puddles are a hidden resource. Figuring out whether and how to run through or around puddles becomes a fascinating discussion about deeper desires and true motives. stomping on puddles to splash your teammates turns an otherwise tiresome run into a fartlek workout that rivals a video game for entertainment value.

If you have woods available to you, running in the woods in the rain is magical. And I don’t mean magical in a sparkly, Disney-esque way, I mean magical as in gatherings of druids in dank glens, shrouded in dark purposes. On one run this week, I was running with a group in the Estabrook Woods and we came to a stop at the junction of two trails. It was gloomy and primeval, and we shivered, but not from cold.

Another advantage to running in the rain: no one obsesses about time and pace. If the workout is intervals or hill repeats, nobody cares about hitting splits. The battle is with the rain and the wind, not with the watch. I’ve experience this myself with my CSU buddies when we’re running laps in a hurricane and the times are so slow as to be almost irrelevant. You can get a lot out of such a workout, and it’s never boring.

After the run or workout is over, everyone is soaked. This is a good thing. Never underestimate the value of bonding through common exposure to the elements. In the case of our team, we try to gather everyone inside, shed the shoes and do some group stretching or core strength work to extend the sense that we’ve all made it through the storm and are safely home.

Perhaps even the lone runner, returning home dripping on the threshold, feels a momentary kinship with all the other ships still at sea.

Running and Racing have been important parts of my life for as long as I can remember. I ran Track and Cross Country at Amherst HS, back in the day, and am proud to have been training and competing with the Cambridge Sports Union (CSU) for more than thirty years. If my bones hold out, I hope to continue for another thirty. Sixteen years ago, I began coaching, first as an Asst. Coach at Newton North HS in Newton, MA, and for the past ten years, as Head Track and Cross Country Coach at Concord Academy in Concord, Massachusetts. I've been writing about running for almost as long as I've been running, dating back to high school, when I would write meet summaries for the Amherst Record for about $0.33 per column inch. I've been blogging about running since 2005, and began blogging at "the runner eclectic" in 2014. Until recently I also had a day job, working full-time as a Technical Product Manager for Nuance Communications, based in Burlington, MA. But I am now on what might turn out to be a permanent sabbatical. Thank you for reading my blog, and please consider leaving a comment.
View all posts by Jon Waldron →
This entry was posted in High School Runners, Weather and Seasons. Bookmark the permalink.