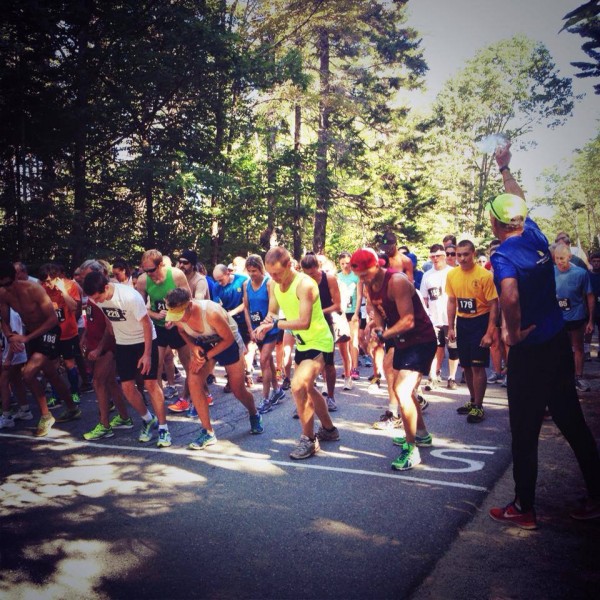 It’s been a long time between races, that’s for sure. The last time I stood with a tribe of runners, numbered bib pinned clumsily to my shirt, was way back in March of this year. That’s 145 days — more than 1% of my adult life! — if you happen to be keeping score at home.

Actually, I didn’t really plan to run this race. It just happened that one of the very few road races held on Mt. Desert Island fell on the weekend when Joni and I would both be in Maine. Joni had pointed this out to me several weeks earlier, and had suggested that we take part. However, I had forgotten all about it until the day before I left Newton. And even then, I had mis-remembered the date and thought it was on Sunday. When Ann and I arrived Friday night, Joni asked me whether I still wanted to do the race the next morning. Without an extra day to weigh the pros and cons, I just said, “Sure, why not?” and like that, my self-imposed exile from racing was over.

The next morning we got up early, brewed some coffee, and made the 20-minute drive to Northeast Harbor. I had run the race years before and knew that it followed a point-to-point course that began several miles away at the far end of Sargent Drive, a scenic road that followed the Eastern edge of Somes Sound, and finished on the main street of the town.

Joni, the marathoner, mentioned jogging the roughly four miles to the start, but I vetoed that idea. Instead, we boarded a shuttle bus with everyone else to get bused to the start. Unfortunately, this meant that we didn’t have quite as much time to warm-up as we would have liked, perhaps fifteen minutes in total to jog, do drills, do a couple of strides, and take our place among the roughly 100 runners waiting at the start.

I swore up and down to Joni and to myself that I would not run the first mile too fast. For one thing, I wasn’t 100% warmed up. For another, I didn’t have a lot of recent experience running “race pace.” My hardest effort in the last month had been a 5k tempo run on a track at ~6:20 per mile, and that had felt plenty hard. Five miles of Sargent Drive would be far more demanding. Finally, the first mile had a sizable hill right off the bat. I told Joni I would try to run the first mile in 6:30 and then, if I felt good, I’d pick it up. I’d have to be crazy to go out faster!

When the starter sounded the air horn to set us on our way, I felt like I was doing the right thing. On both sides of me, runners of all shapes and sizes sprinted past. There were little kids, teenagers, grey-beards, and a fast guy with an even faster dog, and they were all running faster than me. I tried to settle into a reasonable pace. After the first hill, I started getting comfortable and began passing a few people.

I didn’t feel bad, but keeping in mind my lack of preparation, I consciously slowed it down a bit. Mostly, I tried to avoid getting drawn into mid-race competitions with the runners ahead of and around me. Since most of them had gone out too fast, this wasn’t too difficult as most of them would just drift backward after a while anyway. I observed something I’ve noticed many times before, that most people tend to push the uphills and ease off on the downhills. I tried to do the opposite, shortening my steps and running efficiently on the uphills, and then re-establishing my “tempo” pace as soon as I crested the hill.

It seemed to take a long time to get to Mile 2 (6:24), and Mile 3 (6:26), but after that, I knew I’d be able to maintain the pace for the last two miles. But one thing that did surprise me was how “flabby” my racing brain had become through disuse. On a rational level, I was sure I was physically capable of running a certain pace, or even speeding up, but my race brain kept telling me that the pace was too fast and that I needed to slow down or stop. It felt like an additional source of resistance, like running into a headwind. Over the final miles I had this weird internal dialog going on where one part of my brain would say, “Wow, this is hard. You’re going to blow up for sure,” and another part of my brain would say “Don’t believe that loser; you’re doing great!”

I managed the last two miles alright, and even passed two more people while running my steady 6:20-6:24 pace. I finished in 31:47, nothing too exciting, but well within myself.

After a cool down, we returned to discover that Joni, who had run beautifully even splits, had been the third woman overall and had won an age group prize, while I had managed to take second in mine. There’s something to be said about small races in obscure locations! Anyway, we both received glass beer mugs for our troubles and considered it a good morning’s work.

There was one more test, of course, and that was yesterday, Sunday, when I went out for my post-race easy run. Some stiffness; a little discomfort in the ankle, but nothing unusual or alarming. Actually, I was pleasantly surprised at how good I felt overall.

So that’s it. No big news. Nothing to write home about, although I guess I AM writing home about it. Mainly, I just want to note that those beer mugs look like fine additions to the glassware here at the cottage

Running and Racing have been important parts of my life for as long as I can remember. I ran Track and Cross Country at Amherst HS, back in the day, and am proud to have been training and competing with the Cambridge Sports Union (CSU) for more than thirty years. If my bones hold out, I hope to continue for another thirty. Sixteen years ago, I began coaching, first as an Asst. Coach at Newton North HS in Newton, MA, and for the past ten years, as Head Track and Cross Country Coach at Concord Academy in Concord, Massachusetts. I've been writing about running for almost as long as I've been running, dating back to high school, when I would write meet summaries for the Amherst Record for about $0.33 per column inch. I've been blogging about running since 2005, and began blogging at "the runner eclectic" in 2014. Until recently I also had a day job, working full-time as a Technical Product Manager for Nuance Communications, based in Burlington, MA. But I am now on what might turn out to be a permanent sabbatical. Thank you for reading my blog, and please consider leaving a comment.
View all posts by Jon Waldron →
This entry was posted in Race Reports. Bookmark the permalink.