On Friday night in Monaco (Friday afternoon here in the U.S.), Asbel Kiprop will attempt to break the world record for 1500m. The current record of 3:26.00 was set in Rome by Hicham El Guerrouj over sixteen years ago. If Kiprop runs faster, his achievement will be rightly celebrated and his name inscribed in the record books. But I’m thinking maybe Andrew Rotich’s name should go there, too.

Rotich, you see, has been hired as a rabbit; his job is to pace the first couple of laps for Kiprop and the rest of the field. I expect there’s another rabbit in the race, too, in which case the two of them will probably try to get the field through 1100m.

There’s plenty of disagreement about whether Kiprop can break the record or even win the race, but everyone agrees that if he does it, it will require near-perfect pacing. That means a first 400 in ~54-high, 800m in ~150-151, and 1100m in ~2:45-2:46. If the rabbits take it out too fast or slow, or if they run too unevenly, any chance at the record will be gone. In longer races like the 5000m or 10000m, pacing is certainly important for record attempts; but in a mile or 1500, spot-on pacing is critical. For example, when El Guerrouj set the current 1500 record, he had absolutely superb pacing from two strong runners, Robert Kibet and Noah Ngeny.

Likewise, when El Guerrouj ran 3:43.13 a year later to set the mile world record, he was paced by Kibet and William Tanui (the 1992 Olympic champion at 800m). He was also chased by Ngeny (or Ngeny was paced by El Guerrouj — take your pick), who merely ran the second fastest mile in history. One feels that all four men played critical parts in making the record possible.

While most world records in the distance events are set with the aid of great pacing, there are exceptions. In the 2012 Olympics, David Rudisha led wire-to-wire in the 800m and ran a world record 1:40.91. But examples like this are increasingly rare. Having a pace-setter allows would-be record breakers to conserve mental and physical energy. Of course that all goes out the window if the pace-setter runs erratic splits.

So it’s no surprise that rabbiting, has become a respectable profession, and that the job of pacing an important high-profile race is not left to amateurs. A couple of years ago, former U. of Oregon runner Matt Scherer earned fame and became in demand as a particularly reliable professional rabbit. Since 2011, Scherer has rabbited nearly 70 professional races. He has paced at least nine runners who went on to set national records in those races.

Wouldn’t it be interesting if records began listing the pacer in addition to the record setter? Maybe Athletics should follow Hockey and list not just goals but also assists. Wouldn’t it to be great to see this: 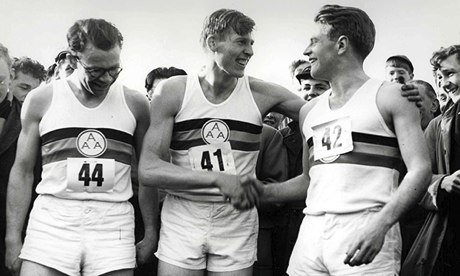 Running and Racing have been important parts of my life for as long as I can remember. I ran Track and Cross Country at Amherst HS, back in the day, and am proud to have been training and competing with the Cambridge Sports Union (CSU) for more than thirty years. If my bones hold out, I hope to continue for another thirty. Sixteen years ago, I began coaching, first as an Asst. Coach at Newton North HS in Newton, MA, and for the past ten years, as Head Track and Cross Country Coach at Concord Academy in Concord, Massachusetts. I've been writing about running for almost as long as I've been running, dating back to high school, when I would write meet summaries for the Amherst Record for about $0.33 per column inch. I've been blogging about running since 2005, and began blogging at "the runner eclectic" in 2014. Until recently I also had a day job, working full-time as a Technical Product Manager for Nuance Communications, based in Burlington, MA. But I am now on what might turn out to be a permanent sabbatical. Thank you for reading my blog, and please consider leaving a comment.
View all posts by Jon Waldron →
This entry was posted in Pro Runners, Records & Statistics. Bookmark the permalink.

2 Responses to Assisted by…