So, it turns out that the folks at “Science of Sport” published a piece — way back in 2008 — speculating on when we were likely to see a sub-2:00 marathon. My first reaction was, “crap, they’ve probably made all the points I was trying to make, only better.” My second reaction was to feel regret at the loss of Sammy Wanjiru, who was 22 when the article was written and who had only that summer won the Olympic marathon. My third reaction was to look more closely at their analysis.

In their article, they analyze marathon times in the light of 10,000m times, and conclude:

“I think it will be surprising if we see a 2:03:30 clocking in the next ten years, and maybe then it will be Bekele or Tadese. But it will take maybe five or six generations before we even get to 2:02, let alone 2 hours.”

Two observations, with the benefit of hindsight.

So, a cautionary tale: even a thoughtful, “scientific” approach can fail to account things that have a big impact on the likelihood of someone running a new WR. .

What makes a new record more likely? In no particular order, here are some possible reasons:

Except for the last one, all of the above have contributed to improvements in the record in the past, and are plausible candidates to contribute to a faster marathon in the future. If we look back at the history of the marathon and the record progression, we should be able to identify these factors at work.

In 1908, the marathon distance was standardized at 26 miles 385 yards. The first IAAF-recognized WR at that distance was Johnny Hayes’ 2:55:19, the winning time in the London Olympic Marathon. For the next five years, there was rapid progress — but one can presume that this mostly reflects having all the best distance runners of the time running the standard distance. In any case, by 1913, the WR stood at 2:36:07. I propose taking that as our starting point for considering the long-term trend of improvement. Mapping that mark and all subsequent improvements, we get this chart: 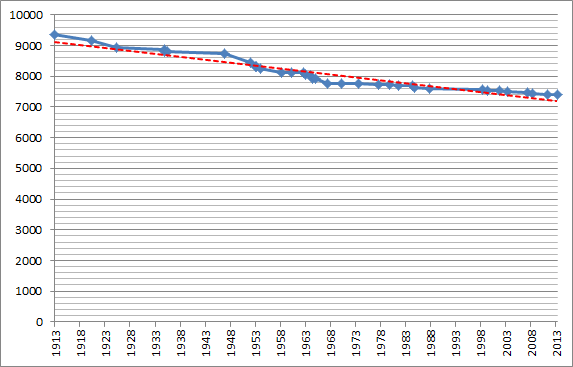 (Times on the y-axis are given in seconds)

Notably, there is a long period of little improvement from the mid-1920s to the mid-1940s, followed by the 20-period of the most rapid improvement in the last century. Why? Who knows for sure, but one hypothesis is that the worldwide depression in the early ‘30s, followed by World War II, drastically reduced both participation and opportunities to compete, two of the factors in our list.

in 1967, Derek Clayton ran 2:09:37 to take two and half minutes off the record. Clayton was a training machine, reportedly running 160 miles a week or more, and most of it hard. Not a typical track runner, his training typically consisted of 10-12 miles in the morning and another 10-12  miles in the evening. Here then, is another factor in improvement: training innovation/more rigorous training. Unfortunately for Clayton, he spent most of his career dealing with overuse injuries. Alter-G treadmills and pool running hadn’t been invented yet, making recovery more challenging.

After Clayton, progress slowed down. It took 17 years to lower the WR by a minute and a half, with Steve Jones running 2:08:05 at Chicago. Was mankind approaching the limit of marathon performance? Not quite. Only a year later Carlos Lopes improved the record by almost a minute at Rotterdam. Why did that happen. Well, Lopes run was significant for several reasons:

In other words, record-setting was becoming a higher priority/more lucrative — both for race organizers and the competitors.

In April 1988, Ethiopia’s Belayneh Dinsamo ran 2:06:50, and then in September, Brazil’s Ronaldo da Costa sliced another 45 seconds off, running 2:06:05 in Berlin. Da Costa is the last non-African born man to hold the WR.

In the past 25 years, the record has been improved another 2:27. Over that stretch, there has been an increase in the number of events, an increase in the prize money (including bonuses for fast times and record), and a huge increase in the number of African runners competing, including top track runners like Tergat and Gebrselassie. So many of our record-altering factors have been coming into play. And yet, with all this change, including a huge shift in the incentives to try for records, the WR has been improved by only 2:27 in 25 years. If we look only at those 25 years, and use them to project future improvements, the graph looks like this: 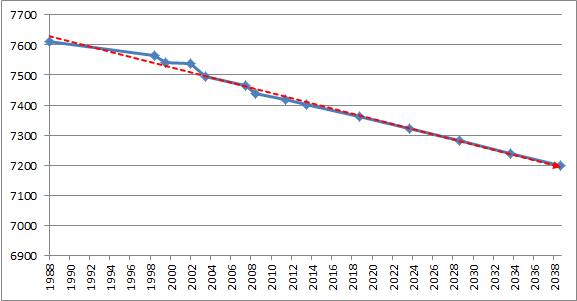 In other words, if the record keeps improving at the cureent rate (over the last 25 years), we’d expect someone to run sub-2:00 around 2038.

So the question becomes, is there any factor out there that would actually accelerate WR progress beyond the current trend? No one can say for sure, but here’s my take: I don’t think training methods will improve much. I don’t think there will be another huge expansion of the pool of participants, although there is still the possibility of bringing more potential record-setters into the sport. While I expect prize money to increase, I think that it’s already high enough so that doubling it (e.g.) will not double the incentive to train hard and run fast. I also have a feeling that watching record attempts will not become MORE popular, as the sport turns more and more toward participation for average folks.

The wildcard in all of this is the possibility of illegal aids, or truly novel performance enhancement techniques like manipulating genes in the service of better endurance. There’s no way to predict if we are the verge of some discontinuous source of new records by super-runners.

Whew. I’ve spent way too much time on this. But I’m sticking with my prediction that no one runs faster than two hours in the next ten years. I’m still waiting to see whether anyone will take that bet.

Robin writes to say that I should have mentioned asymptotes. Given a curve, such as the marathon WR progression over time, an asymptote is a line for which the vertical distance between the curve and the line tends toward zero as time goes to infinity. This makes intuitive sense:  there must be a limit, beyond which no improvement is possible (it’s not possible to run a marathon faster than 0 seconds!). Our intuition is that progress should slow over time, and that the improvement curve should get flatter and flatter, approaching the asymptote ever more gradually . To me, one of the most interesting things about the actual progression is that our intuition about the asymptote is so often at variance with actual performance. For example, looking at the last 100 years, and dividing that period into five 20-year periods, here’s how the record improved:

The long-term trend is for improvement to slow, but a) not always! and b) past results do not guarantee future returns. It would have been easy, in 1993 to conclude that we were hovering above the asymptote and that further improvements would take much longer than past improvements. Instead, from 1993-2013, improvement was almost as rapid as in the previous 20 years. The key observation is that treating this as a math problem only is not sufficient; there needs to be some wrestling with WHY records improve, and identify factors that lead to more rapid improvements then are expected.

Running and Racing have been important parts of my life for as long as I can remember. I ran Track and Cross Country at Amherst HS, back in the day, and am proud to have been training and competing with the Cambridge Sports Union (CSU) for more than thirty years. If my bones hold out, I hope to continue for another thirty. Sixteen years ago, I began coaching, first as an Asst. Coach at Newton North HS in Newton, MA, and for the past ten years, as Head Track and Cross Country Coach at Concord Academy in Concord, Massachusetts. I've been writing about running for almost as long as I've been running, dating back to high school, when I would write meet summaries for the Amherst Record for about $0.33 per column inch. I've been blogging about running since 2005, and began blogging at "the runner eclectic" in 2014. Until recently I also had a day job, working full-time as a Technical Product Manager for Nuance Communications, based in Burlington, MA. But I am now on what might turn out to be a permanent sabbatical. Thank you for reading my blog, and please consider leaving a comment.
View all posts by Jon Waldron →
This entry was posted in Records & Statistics. Bookmark the permalink.