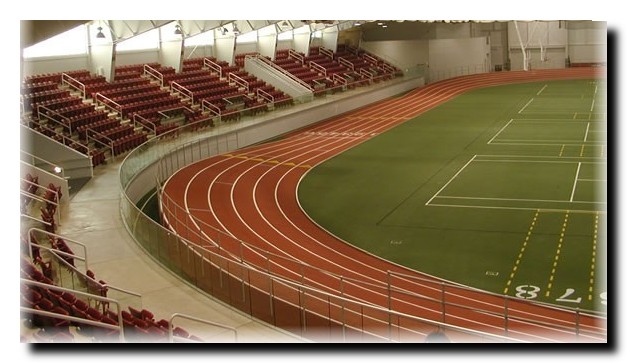 I feel a little guilty missing two important club races to careen around 200-meter banked ovals in overheated fieldhouses. I also feel a little embarrassed. Running fast is not a seemly activity for senior citizens. It’s a game for for high school and college kids, hardly a respectable pastime for an aging bag of bones whose speed peaked at the tail end of the Reagan administration.

So why do it? Am I so vain that I need the ego boost of being marginally faster than all the other grey ghosts haunting the masters meets? Is it the even greater vanity of earning victories by the simple expedient of outliving all your rivals? No and no, I say. There’s a much simpler explanation for why I’ll forgo the pleasures of a half marathon with thousands of runners for an intimate mile with perhaps only a dozen other rebels.

The explanation dawned on me as I was talking with Gordon over the weekend about his winter racing plans. He had a half marathon lined up down in New Orleans, the Amherst 10-miler, and of course, New Bedford. I was impressed that he already had a full schedule of long, tough races. That schedule represents a set of choices — choices about training, travel and, inevitably, what races to skip. I thought, too, about Terry, and the choices that he makes so that he can ski all winter and be at his best for the 50K American Birkebeiner at the end of February. He’ll do his long runs and track workouts, but no Amherst 10M for him!

At some point we all have to admit that the running scene, like the cereal aisle in the local supermarket, presents us with far too many incompatible options. At some point, you just need to decide whether you’re going to go with the Shredded Wheat or the Count Chocula. In theory, you could have both, but the result would not be a happy one.

I’m going to run my track races because one of the main pleasures I get out of running is the pleasure of running fast enough that I KNOW I can’t sustain it for very long. There’s something thrilling about the feeling that it’s only a matter of a couple of minutes before the muscles seize up, and that if you time it just right, total system failure occurs just AFTER you cross the finish line. If I’m healthy enough, I want to keep experiencing that for as long as I can. I don’t care that it doesn’t LOOK fast; it feels fast, no matter what the watch says, and that’s good enough for me.

For this winter, at least, let others run half marathons, marathons, and ultras. I’m choosing the mile because that’s a kind of running that I’m not willing to give up. I never cared that much for Shredded Wheat, anyway.

Running and Racing have been important parts of my life for as long as I can remember. I ran Track and Cross Country at Amherst HS, back in the day, and am proud to have been training and competing with the Cambridge Sports Union (CSU) for more than thirty years. If my bones hold out, I hope to continue for another thirty. Sixteen years ago, I began coaching, first as an Asst. Coach at Newton North HS in Newton, MA, and for the past ten years, as Head Track and Cross Country Coach at Concord Academy in Concord, Massachusetts. I've been writing about running for almost as long as I've been running, dating back to high school, when I would write meet summaries for the Amherst Record for about $0.33 per column inch. I've been blogging about running since 2005, and began blogging at "the runner eclectic" in 2014. Until recently I also had a day job, working full-time as a Technical Product Manager for Nuance Communications, based in Burlington, MA. But I am now on what might turn out to be a permanent sabbatical. Thank you for reading my blog, and please consider leaving a comment.
View all posts by Jon Waldron →
This entry was posted in Indoor Track, Racing. Bookmark the permalink.