Late last week people around the globe were tuning in to watch the opening matches of the World Cup. I would have done so, too, except that I couldn’t tear myself away from ESPNU, which was covering the The NCAA Division I Track and Field Championships in Eugene.

The NCAA Championship has become a great meet to watch, and a refreshing break from Diamond League meets where every race is rabbited and the outcome of one has no effect on the next. Not that there’s anything wrong with Diamond League meets and professional runners going really, really fast, but there’s something missing when there are no teams to root for and no reason to care that some unheralded freshman exceeded expectations and managed a sixth place that earned her school three points towards the team title. If you like stories and drama, you’ll tune in to the meet where a dropped baton or a clipped hurdle or a lean at the tape can decide the national championship.

On the first day of the championships, Oregon freshmen Edward Cheserek won the 10000m with a kick that was so sudden and swift that a 28-minute race was over in an instant. It was the fourth time in his young career that Cheserek had competed for a national title, and the fourth time he had used his lethal finishing speed to win the day. His win in the 10K set up a showdown in the 5K two nights later with Arizona senior Lawi Lalang, the defending champion. Until Cheserek had arrived on the scene, Lalang had been considered the dominant collegiate distance runner of his era, but “King Ches” had defeated Lalang indoors with another ridiculous kick. With another display of his late-race speed, it seemed that the Oregon runner had an unassailable advantage in their rematch.

It wasn’t just a two-man race. Also in the 5000m Friday night was Texas Tech senior Kennedy Kithuka. Like Lalang, Kithuka had felt the sting of Cheserek’s kick. Kithuka had been the heavy favorite in the Div I Cross Country championships in 2013, but Cheserek had hung with him and blown by him at the end.

In other words, both Lalang and Kithuka had similar motivation to make the race fast and try to break away, or at least neutralize Cheserek’s fast finish. As the gun went off, Kithuka went to the front and tore through a 30-second first 200 before settling down to 64-second 400s. Kithuka took the field through 1600m in just under 4:16 (also under NCAA championship record pace) and then, as he slowed, Lalang took over. After a slower fifth lap brought them through 2k in 5:20, Lalang tightened the screws again and got the pace back down to 64’s, with Kithuka on his shoulder and Cheserek biding his time in third. Kithuka would take the lead once more at 3k (8:04) before fading. Meanwhile, Wisconsin’s Mo Ahmed moved up into third, with the three of them a two-second gap on the rest of the field as they passed 4k (10:46).

At this point, you would be forgiven for thinking that the race was Cheserek’s for the taking. For two and a half miles Kithuka and Lalang had been pushing at the front, while Ches had been drafting them. Surely he had saved his best for the final lap while they had been battling the wind and using more energy. It was just a matter of time, now, and then with a few hundred meters remaining the king would throw down and no matter how much strength the others had, it would be over.

In the lead, Lalang ran the penultimate lap in 63.59, his fastest since the start of the race and fast enough to break Ahmed. Now it was just Lalang and Cheserek, with the Oregon runner on the shoulder of the Arizona runner as they entered the backstretch for the final time. At the precise point where he had taken the lead in the 10000m, Cheserek kicked by Lalang, but having been running much harder than in the 10k, Cheserek’s kick wasn’t quite as fierce. Lalang responded with a kick of his own, and got back on Cheserek’s shoulder as they came out of the Bowerman curve and entered the home stretch. With both of them all out, Lalang held form and Cheserek cracked. Twenty meters from the line, it was undeniable. Lalang would defend his title.

I had stayed up to watch that wonderful race, and after it was over, I couldn’t stop thinking about it, and in particular about how the race had developed and how the older runner had taken the kick out of the younger. Ultimately my restless spirit sought insight and wisdom from the Good Book (I mean the Merriam-Webster dictionary that I keep by my bedside), where I found this definition:

Tactics  – \’tak-tiks\ – noun plural in form but singular or plural in construction:
a :  the science and art of disposing and maneuvering forces in combat
b :  the art or skill of employing available means to accomplish an end

Now, at this point, I have to admit that I’m as careless with the word “tactics” as most track fans who, upon seeing a field of supremely fit and fast runners tripping over each other in their attempts to avoid taking the lead, smirk and dismiss the entire spectacle as a “tactical” race. In other words, I use “tactical” as a synonym for sit-and-kick. But this casual equivalence robs the word “tactics” of its subtlety and power.

Because that 5k was every bit a tactical race. In this case, Lalang understood and had confidence in his abilities (his “available means”) and used every bit of his art and skill to employ them to win. Cheserek, too, employed his available means, drafting the whole way to give himself the best chance to win. But perhaps he lacked a certain art or skill in maneuvering his forces in combat. Perhaps he kicked too soon, making the one extravagant and costly move a little too early.

We’ll never know; all we have is the outcome of the race, and the knowledge that this time, Lalang — in a victory savored by countless victims of “sit and kick” races — won the battle of tactics. 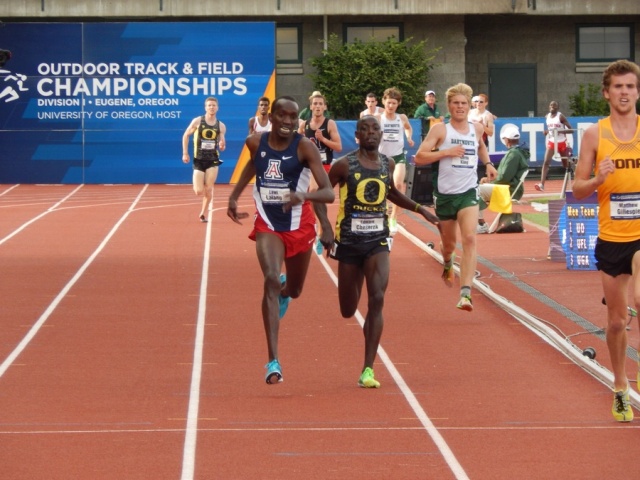 Running and Racing have been important parts of my life for as long as I can remember. I ran Track and Cross Country at Amherst HS, back in the day, and am proud to have been training and competing with the Cambridge Sports Union (CSU) for more than thirty years. If my bones hold out, I hope to continue for another thirty. Sixteen years ago, I began coaching, first as an Asst. Coach at Newton North HS in Newton, MA, and for the past ten years, as Head Track and Cross Country Coach at Concord Academy in Concord, Massachusetts. I've been writing about running for almost as long as I've been running, dating back to high school, when I would write meet summaries for the Amherst Record for about $0.33 per column inch. I've been blogging about running since 2005, and began blogging at "the runner eclectic" in 2014. Until recently I also had a day job, working full-time as a Technical Product Manager for Nuance Communications, based in Burlington, MA. But I am now on what might turn out to be a permanent sabbatical. Thank you for reading my blog, and please consider leaving a comment.
View all posts by Jon Waldron →
This entry was posted in Racing. Bookmark the permalink.