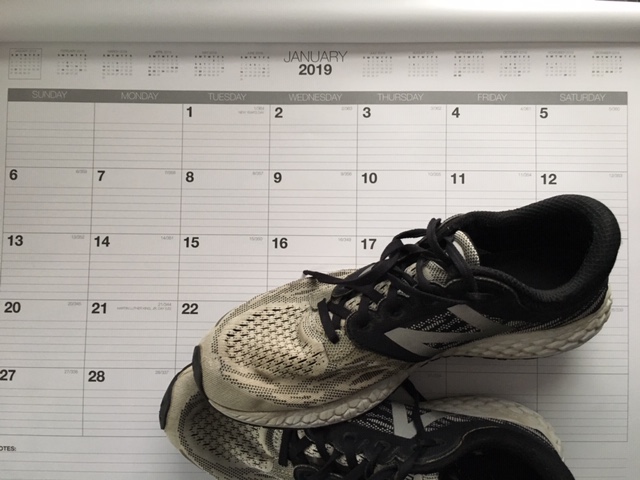 “If the nearnesse of our last necessity, brought a nearer conformity unto it, there were a happinesse in hoary hairs, and no calamity in half senses. But the long habit of living indisposeth us for dying…” – Sir Thomas Browne

It seems to me that anyone claiming that running is an addiction needs to explain why it’s so hard, sometimes, to even get out the door. What self-respecting addiction makes withdrawal as easy as lingering over a morning cup of coffee, rather than venturing out into sub-freezing weather with aching muscles and brittle bones?

I consider running to be a habit, not an addiction, and the difference is that a habit relies on the momentum of our ongoing experience, not on morbid compulsion. In my case, I don’t feel compelled by to run by any kind of physical craving, but I continue to observe the habit of running because the whole experience – from stiff and sore first steps to satisfied exhaustion is so familiar and ingrained.

“Are you still running?” a non-running friend or family member will ask, and I’ll respond that I don’t have the imagination to do anything else. Common sense and the popular press suggest that other activities might be more suited to an aging skeleton and increasingly erratic cardiovascular system, but I just can’t see myself not running, even as I labor to keep up with last year’s pace.

I’ve known a few runners who did manage to stop, who to all appearances gave up the habit completely. I assume they finally got tired of the physical discomfort and the mental fatigue of comparing their older selves to their younger ones. Or perhaps they had the savvy and temperament to quit while they were ahead, without ever looking back. But other than those few, most of the older runners I know continue to honor the habit, even when they’ll swear to you that they don’t really run anymore. I suspect they are still sneaking out for runs on bad knees, or shuffling along with compromised hearts, and maybe even recording those runs in log books that were once used to store impressive mileage totals. It’s a hard habit to break.

It’s not just the physical habit of running that is so hard to give up; it’s the mental habit of training, including the conviction that if only the body would allow it, the only thing preventing you from returning to racing fitness is simple hard work. So you bide your time, not exactly hoping for a miracle cure, but keeping yourself in the habit in case a new medical breakthrough clears the way to take on the hard work of training again.

The quote at the top of this post has always appealed to me. I first encountered it in an essay by Lewis Thomas in his book, Lives of a Cell. In the essay Thomas, a physician and “Biology Watcher,” muses on the body’s orderly approach to dying. Instead of a random or catastrophic process, he describes the mostly predictable stages of transition from living organism to former living organism. Seeing such a beautifully designed process ought to help us face our inevitable demise without fear, but, as Browne reminds us, the long habit of living makes it hard for us to cozy up to death as it draws nearer. Instead, we resist in both thought and action.

I hope this all doesn’t sound too ghastly. I don’t think I have one foot in the grave already. In fact, in an hour or so, I’ll head for my afternoon run, the last of the year. I’m not planning on dwelling (any more than usual) on the finality of things. The funny thing about this long habit of running is that it both encourages me to think about my decline, but also makes the end seem far in the future.

More than that, it infuses the future with possibilities…

Maybe this afternoon’s run will kick off more consistent running in 2019, which will motivate me to race more and compete more vigorously for the consolation prizes they hand out to geezers at local bar races. Maybe this coming year I’ll run that sub-20:00 5K that I was convinced I had in my legs and lungs last fall. Maybe a few good runs will become a few good weeks, and I’ll build up my mileage again to where I can think about running a half marathon and helping my club compete as a team for a few bucks of age group prize money. Maybe – oh, what a privilege it would be! – I’ll slip comfortably back into the rhythm of three workouts a week, with track, tempo, and long run rising like three mountains up from the boring, but necessary, routine of slow, aerobic efforts.

I never thought I’d be obsessed with age as a number, but this year – the year I turned 60 – I thought about it all the time. Whenever I felt any little ache or pain, instead of reviewing my training habits and addressing my weaknesses, I would immediately think, “What do you expect? You’re sixty!”

Maybe all runners are dreamers, and maybe dreaming is a habit, too.

On the threshold of a new year, these long, intertwined habits of running and dreaming indisposeth me to stopping.

Running and Racing have been important parts of my life for as long as I can remember. I ran Track and Cross Country at Amherst HS, back in the day, and am proud to have been training and competing with the Cambridge Sports Union (CSU) for more than thirty years. If my bones hold out, I hope to continue for another thirty. Sixteen years ago, I began coaching, first as an Asst. Coach at Newton North HS in Newton, MA, and for the past ten years, as Head Track and Cross Country Coach at Concord Academy in Concord, Massachusetts. I've been writing about running for almost as long as I've been running, dating back to high school, when I would write meet summaries for the Amherst Record for about $0.33 per column inch. I've been blogging about running since 2005, and began blogging at "the runner eclectic" in 2014. Until recently I also had a day job, working full-time as a Technical Product Manager for Nuance Communications, based in Burlington, MA. But I am now on what might turn out to be a permanent sabbatical. Thank you for reading my blog, and please consider leaving a comment.
View all posts by Jon Waldron →
This entry was posted in Training, Uncategorized and tagged Lewis Thomas, Running Habit. Bookmark the permalink.